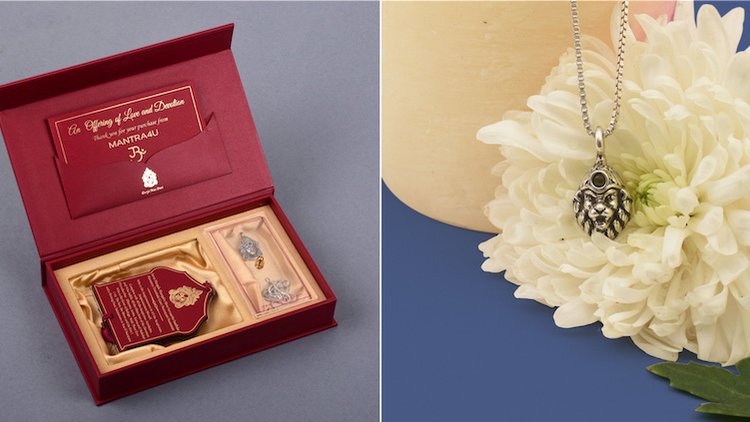 A new devotee-run company, Mantra4U, has cornered the market on a unique offering – wearable protective mantras, encased in pendants and viewable through a tiny-self contained microscope.

But it’s not just any business. Behind Mantra4U is a deeply personal and spiritual journey.

While living in the Washington D.C. area, husband and wife Harinamananda Das (Hari Ram Chopra) and Sonia Chopra performed service at ISKCON of Potomac for many years. Sonia worked with Anuttama Das of ISKCON Communications for two decades, and Harinamananda helped to clean the kitchen and temple whenever he found the time. With their children growing up attending the Sunday School, they were an intrinsic part of the community.

In May 2014, however, tragedy struck. Harinamananda was diagnosed with a rare form of cancer. Following advice from the devotees, he and Sonia began to read the Narasimha Kavacha Stotram daily. Harinamananda became fond of it, and after surgery he made one request of his wife – could she get him a Narasimha Kavacha pendant with the mantra contained inside? 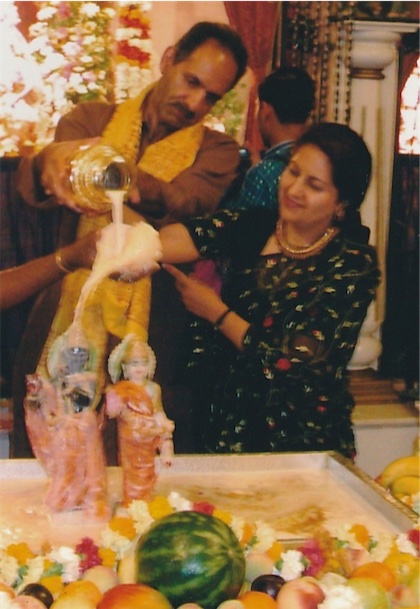 “Coming from a guy who never wore any jewelry, not even our wedding ring, I took his request to heart and started to research seriously,” Sonia says. “But I got nowhere. It was completely impossible to find.”

In April 2016, Harinamananda Das passed away from this world. A year and a half later, Sonia was still struggling to overcome depression, and praying to the Lord to help her.

“Then one evening, as I was reading the Narasimha Kavacha, I remembered that my husband wanted me to have one pendant made for him. My research journey started once again, but to no avail. I was losing hope. Finally, in tears, I prayed to Lord Narasimha that if He wished to manifest in This Form, in this Kaliyuga; then He would need to guide me, as I was about to give up.”

The next day, the Lord answered her prayers. Sonia came across a US-based company making microphoto lenses using proprietary technology.

Thinking it would be just a one-time order, she had only a couple of custom Narasimha Kavacha pendants made. In February 2018, she flew to India, gifting one to her husband’s guru, Radhanath Swami, on his behalf. The other, she offered to Lord Narasimhadeva in Mayapur to personally thank him, and wears to this day. 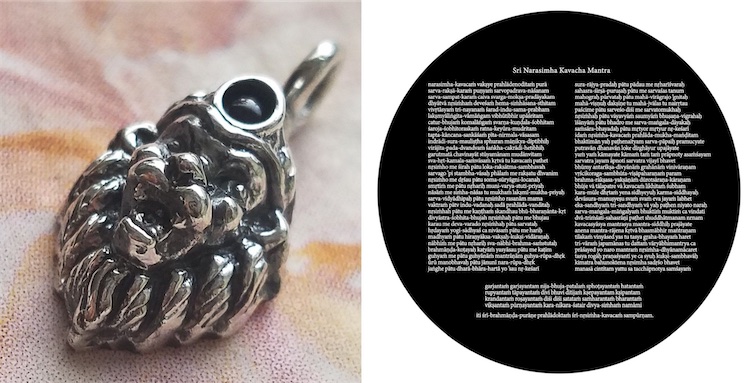 Upon returning to the US, Sonia at last felt a sense of fulfillment. But the story wasn’t over. Soon after, her friends and other devotees in her community began to ask if she was going to make any more pendants.

Taken from the Brahmanda Purana, the Narasimha Kavacha Stotram is a prayer offered by the boy devotee Prahlad Maharaja to Lord Narasimhadeva for protection. Narasimha literally means half man half lion, while Kavacha means shield or armor.

The Hanuman Chalisa is a devotional hymn written by the 16th century poet Tulsidas, which describes the auspicious form, knowledge, virtues, powers and bravery of Hanuman, his glorious acts of service to Lord Rama, and the need for Hanuman’s mercy. It also requests that Hanuman reside in the heart of all devotees of Lord Rama. Chanting the Hanuman Chalisa is believed to invoke Hanuman’s divine intervention in grave problems, including those concerning ghosts and evil spirits.

The Mahamrityunjaya Mantra, literally translated as “Great Death-conquering Mantra,” is a verse from the Vedas addressed to Lord Shiva, a great devotee of Krishna. According to the Shiva Purana, it helps one to overcome the fear of any unknown event, and is also said to be beneficial for mental, emotional and physical health.

Meanwhile the Maha Lakshmi mantra prays to the consort of Sri Maha Vishnu to “inspire and illuminate our mind with understanding.”

Sonia approaches creating these pendants and choosing the mantras not as a business, but as a spiritual process, praying to Lord Nrsimhadeva for guidance on which to do next, and even what the design should be. When she is inspired, she carefully researches each Mantra from bona fide sources, consulting gurus and scholars.

Her designers in India and the US then create the pendants – which so far have come in the form of Lord Narasimhadeva’s face, Lord Shiva’s drum and trident, Hanumanji’s club inscribed with the words “Sri Rama” in Sanskrit, and a lotus for the Gayatri mantra. Each pendant is made with sterling silver, and comes packaged in a gold-embossed box lined with silk and satin along with a booklet of the mantra and its translation in English

Inside each pendant is the full mantra, which can be viewed through the microphoto lens when loking towards a light source. Some of the shorter mantras include the original Devanagari script, the transliteration, and a photo of the deity in question. Because the pendants are handcrafted in the USA using high quality materials and proprietary technology for the lenses, they are not cheap, at $299 each – rather, they are sold as special protective charms to wear close to one’s heart for many years.

“I have no background or understanding of the jewelry or Lens Technology business,” Sonia says. “Yet somehow the Lord has been very kind in guiding me to the right sources at every step of the way.”

So far, the response has been enthusiastic from customers including devotees, members of the Indian American community, and yoga practitioners.

“I’m getting emails and calls from people all over the world – in the UK, Australia, New Zealand, Malaysia, and Kenya,” says Sonia. “When you can not only read a mantra, but also keep it close to your heart and you know it’s there at all times, you can feel its power and protection.”

Because the pendants are in honor of her husband Harinamananda’s memory, Sonia plans to donate at least twenty-five percent of all net profits to ISKCON projects they supported together, including the goshalas in Gita Nagari and New Vrindaban, and the Food For Life prasadam distribution and book distribution programs at the Potomac temple.

“I realized recently that this story was not really about me,” she says. “It was between the Lord and His devotee, who is my husband; and about the Lord agreeing to fulfill his desire and using me as a medium in the process. So this whole project is a glorification of Lord Narasimha, His blessings, and His mercy. And of course, I also want to use it to glorify my husband, and his memory. Because of him, I was able to do so much seva over the years – he even pointed me in the direction of this project before he left.”

For in-depth information and to purchase pendants, please visit https://www.mantra4u.com/