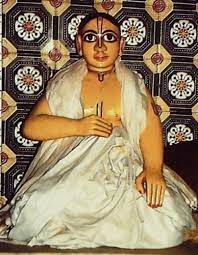 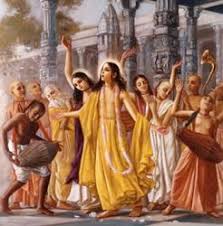 One day Srivasa Pandita went to hear the Srimad-Bhagavatam class given by Devananda Pandita. After some time, Devananda began giving his lecture.  He was surrouned on all four sides by his students, who listened carefully to his reading. Srivasa Pandita was a highly exalted rasika bhakta, a devotee experienced in tasting the mellows of devotion.

Hearing the sweetness of the verses of the Srimad-Bhagavatam, Srivasa Thakura fell to the ground with tears of ecstasy in his eyes.  Weeping and wailing with tears of ecstasy in his eyes, he began rolling on the ground with his voice choked up with emotion.  Seeing all this, the students of Devananda said, “This man is mad. He is not properly giving his attention to the Srimad-Bhagavatam. Throw him out! Eject him!” In this way, the foolish followers of Devananda, who were devoid of knowledge.

From a long way off, Caitanya Mahaprabhu could hear this.  Upon hearing Devananda’s Bhagavatam class, Mahaprabhu became enraged. Caitanya Bhagavata records: “With sharp words, the Lord said, ‘What does this fellow know about the meaning described by the Bhagavatam? He will never know the Bhagavatam even in many lifetimes.

After saying all these things in an angry mood, Caitanya Mahaprabhu, began to flee away from the house of Devananda Pandita, which he considered condemned.

From far away,  Devananda Pandita could hear all these different instructions.  But at the time, he did not pay any mind to all this.

After some time, Caitanya Mahaprabhu took sannyasa and went to Jagannatha Puri.  At that time, Devananda remembered the instructions the Lord had given.  He began to think, “Such a great person as this came near my residence, and I did not get to meet him? I could not understand the glories of such a great and exalted Personality as Caitanya Mahaprabhu who was filled with krsna-prema?

One day in Kuliya, or Koladwipa as it is now known, Sri Vakresvara Pandita went to visit the house of a devotee. That evening Vakresvara Pandita was absorbed in kirtana and dancing. Hearing the news of this, people gathered from all around to take part in the kirtana. As the night went on, more and more devotees began arriving there.  Hearing this news, Devananda Pandita could not maintain his steadiness.  He also hurried to the place where the kirtana was going on.

Seeing the empowered figure of Vakresvara Pandita and hearing his sweet kirtana Devananda Pandita was astonished. He stood transfixed for what seemed like hours. As the night wore on, the crowd grew and, in attempts to push forward and see the dancing of Vakresvara Pandita, it became boisterous and rowdy. 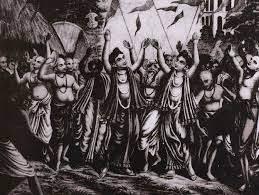 One day, five years after he took sannyasa, Sri Caitanya Mahpaabhu returned to Nabadwipa-dhama from Jagannatha Puri.  Upon his return the devotees felt that their lives had returned.  Their joy knew no bounds. In order to see the lotus feet of Sri Caitanya Mahaprabhu thousands of people gathered there. Whoever had previously committed offenses to the lotus feet of the Lord when he had manifested his lila in Nabadwipa was eager to be forgiven. They all came there to beseech the Lord’s forgiveness for whatever offenses they might have committed.  At that time, in the place known today as the aparadha-bhanjanam, or the place of amnesty (where Srila Sridhara Maharaja now has his temple), Sri Caitanya Mahaprabhu granted forgiveness to all who gathered there and instructed them in the science of devotion.

Hearing these words of Sri Caitanya Mahaprabhu, Devananda was overwhelmed with the sentiments of bhakti. His voice was choked with divine emotion, and he said, “O My Lord; O Supreme Master—You have appeared in Nabadwipa just to deliver all the fallen souls. I am a sinner. I have commited great sins against divinity.  I have failed to worship your lotus feet. As a result of this, I have cheated myself out of your causeless mercy. O Lord of all creation; Supersoul of all that lives! You are supremely merciful. By your causeless mercy I have been able to take darsan of your holy feet on this day. O Supremely merciful one—please be kind upon me and instruct me in the goal of life. Please explain the meaning of Srimad-Bhagavatam to me as well. Hearing this humble request of Devananda Pandita, Sri Caitanya Mahaprabhu spoke as follows:

“O brahmana! Previously you committed an offense to the lotus feet of Srivasa Pandita.  You must go to him and beg forgiveness at his lotus feet. There is no difference between the book Bhagavata and the bhakta bhagavata.  If you get the mercy of the bhakta bhagavata then you will easily attain the mercy of the book Bhagavata.”

Having thus heard the words of Sri Caitanya Mahaprabhu, Devananda Pandita immediately went to Srivasa Thakura and begged forgiveness for his offenses. At that time, Srivasa Thakura embraced Devananda and forgave his offenses. The four directions were filled with the sound of the holy name of Hari as the devotees were all jubilant upon Mahaprabhu’s return to Nabadwipa-dhama. From that day on, Devananda Pandita was accepted in the midst of the followers of Mahaprabhu as a great devotee.

Devananda Pandita’s disappearance day falls on the dark moon ekadasi of the month of Pausa, which corresponds to the month of December.