In the modern day many pastimes between devotees and the Lord in His Arca Avatar, or Deity forms are happening. There are many stories.... Dreams have long been a feature of exchanges between the Lord and His devotees.

In Remuna, Kshirachora Gopinath (photo above) told His pujari in a dream to take the pot of

sweet Kshira the Lord had hidden under his dress, and bring it to His beloved

devotee Mahdavendra Puri. Madhavendra Puri, who was outside under a Banyon

tree, had left the temple, feeling he had offended the Lord by desiring to

taste the Kshira so he could offer it to his own Deity. (narasimhalila.com/ When Govinda Gosh, one of Lord Caitanya's dear associates, abandoned all of his

service in frustration after his wife and son died, Lord Gopinath (photo above) appeared to

him in a dream masssaged his legs. "I don't understand your intelligence," the

Lord Said. "One of your sons dies, and you decide,

'Whats the point in feeding the other one let him die also.'" The Lord agreed

to perform the last rites and yearly pinda ceremony for Govinda, who was then

very happy and got up to prepare an offering. Every year this Deity is taken to

the place where He performs the annual pinda ceremony, but Pankajanghri Prabhu

Dreams of Krishna or Guru are a great insiration for the devotee. In the cases

above, they are also a great inspiration to us and future devotees, because the

dreams are revealed to us through literature or verbal tradition. The devotees

involved spoke about their dreams, or wrote about them, so that we could share

in the ecstatic inspiration, and feel greater faith in Guru and Krishna. If

they kept the pastimes to themselves, we would no know about them. 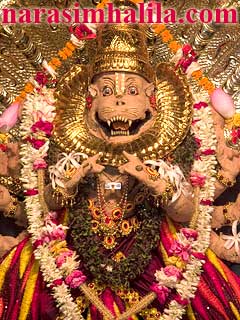 Avatar, or Deity forms are happening. There are many stories in regard to Lord

Nrsimhadeva in Mayapur and Lord Jagannath in Rajpur. (narasimhalila. com/

jagraj1.html) Many devotees have given their realizations, dreams and miracles

they have witnessed. His Grace Pankajanghri Prabhu released them in book form..

Here we have some ancient histories, as well as some from the present. One

obstacle we face is that many devotees who have had experiences with Deities,

don't want to talk about it.

and tells who they are, as in Mayapur Lord Nrsimhadeva's pastimes. But if

devotees won't reveal who they are, at least they could spare us some mercy to

know what happened, even if they don't give their name. Seva Priya devi dasi, who tells of how her daughter Jagannath Lila was born by

always speak of His glories, so she has to tell everyone. She adds that

devotees who read her story say their faith has been increased.

by revealing any pastimes we have seen or experienced. If our life ends without

sharing the mercy we miss that opportunity. 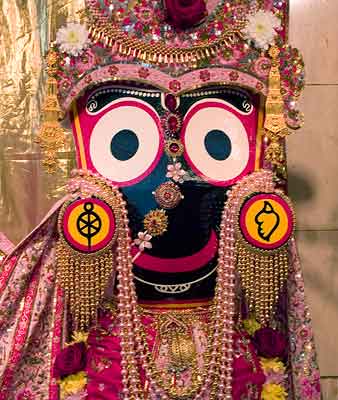 One of the pujaris from Soho temple visited our family in Mayapur in 2009. She

told us a very interesting story about Lord Jagannath in Soho.

Isvara. A donor had offered the funds required.

During her sleep, Lord Jagannath appeared in a dream. He said, "I am God just

as much as He is! I want a flower set also."

"But Lord Jagannath," she pleaded nervously, "Someone donated the money for the

flower set. We don't have the money to buy a flower set for You."

Lord Jagannath's flowers, and the devotees enthusiastically prepared a flower 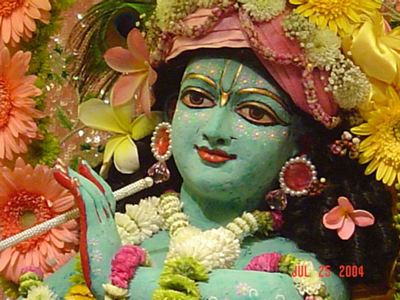 Most Wonderful Dream
as told by Kaisori devi dasi

This is the most wonderful dream I have ever had of a Deity of Krishna. We were

living at St. Augustine, so we would drive to Alachua temple .

This was during a time when I was going through a lot of tests, in spiritual

life, in life in general. I dreamt that I was in the car driving to the temple

with my husband and my mother was also there. We were driving and then we

arrived at the temple.

As soon as we saw the temple I see this mataji coming out of the temple room,

and she says to me, "Take advantage. Krishna is still outside." And I said to

her, "What do you mean Krishna is still outside?"

She said, "The Deity, Shyam, He's right in the center of the temple room. He

I said "Ok. I have to go see that." So I rushed to the temple, and there He

was! The Deity of Shyam was right in the middle of the temple room!"

I offered my obeisances and I started walking close to Him. Then once I was

really--literally this close--suddenly He became Himself. He was no longer a

Deity, He was Shyam. And then He smiled at me.

And He said, "Kaisori, don't worry so much about things. It's not good for

He said, "Whenever you have a problem, or anything that worries you, just come

and tell me and I will take care about it."

It was very very beautiful. That's the most beautfiul dream I have every had. As told by Vaiyasaki Prabhu.

We were in New Mayapur in France for Lord Balaram's Appearance Day. Sri Sri

Krishna Balaram are the main Deities of the temple, and Lord Balaram is the

only Lord Balaram Deity in Europe. It is a big festival. Every temple has their

I gave class and there was a big kirtan. Right on the final day, in the

evening, the devotees presented a play in French. So a few of us went back to

the temple for sayana arotike rather than sit and see a play in French. There

were a few devotees there in the temple, maybe about ten. I led the kirtan, the

consch blew, but the pujari didn't close the curtains, so I just kept chanting.

the curtains. They brought in the beds, they took off all the garments. They

did everything. They put Them to rest, said all the mantras with the curtains

wide open. So I just carried on chanting. Then when the pujaris were finished

they blew the consch and closed the curtains.

open. It's very unusual. So I said the premadvani prayers, and I said to

Anyway, I went home. That night I had a dream. I was walking in some temple. I

don't know where it was. I didn't recognize it. Just me and Prabhupada. We were

walking and I said to Srila Prabhupada, "I think that we got Lord Balaram's

Just then I woke up. I was like wide awake, and I thought "Wow!" I looked at my

clock and it was one o'clock in the morning. I thought "I've got to go back to

sleep," but I couldn't. So I just chanted sixteen rounds.

To share some pastimes or Deity histories, please write to me