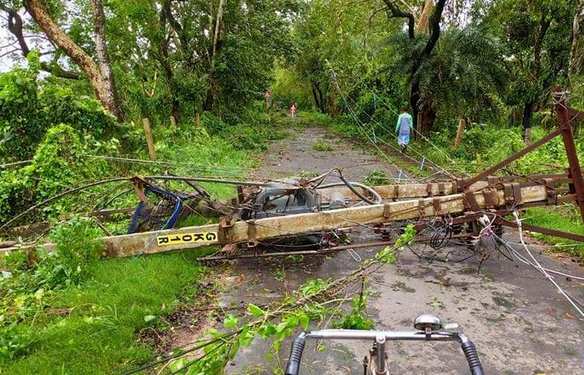 Amphan, the strongest cyclone ever recorded in the Bay of Bengal, reached Sridham Mayapur on Wednesday’s evening. The wind gusts were very severe, reaching the speed of 160km/h, accompanied by torrential rain and tumultuous sounds.

The community devotees were informed of the approaching cyclone and recommendations were given of how to prepare for the forthcoming nature’s disaster. Sarasvati Nagar was expected to be most affected by the cyclone as there are many tin-shed houses there. The Mayapur community leaders therefore had made an arrangement that the devotees owning such tin houses could stay in the brick buildings of other community members. In the morning, after the winds somewhat subsided, the assessment of the community and campus was performed by Mayapur management. Everyone was relieved to know that the Deities, devotees and cows were all well. Although many big trees were uprooted or snapped in half, blocking the roads, damaging fences, walls of the buildings and electrical poles, there was no major damages to the campus. Signboards, temporary fences, tin sheds and massive tree branches were scattered on the ground. The cleaning of the campus commenced immediately, with many devotees and departments personnel involved.

The Radha Madhava Temple reported no damage, the seva to Their Lordships continues uninterrupted. The TOVP reports no damage of the temple and the construction site.

The Goshala too, reported no damages and all the cows are safe. The Mayapur Elephants are safe as well, as they were kept under the shed for the duration of the cyclone. However, lots of trees on the elephant’s premises were fallen and it will require significant effort to clear them up.

In the Sarasvati Nagar sector, two tin houses lost their roofs, while several devotees reported that they did not get any sleep as they had to pull the roof down in the night, so it doesn’t get ripped off by the wind.

Many residential sectors of Mayapur also report absence of electricity. Unfortunately, that might continue for a prolonged period of time, while the government attempts to reinstall the fallen and damaged transformers and electrical lines.

60 Russian devotees were stranded in Mayapur due to Covid-19 pandemics. They needed to leave Mayapur this morning for their repatriation flight from Kolkata. There was lots of anxiety if they will be able to reach Kolkata, as even the local road outside the campus was blocked by the fallen trees. However, with the prompt help of the local management, these trees were removed to give way to devotees’ bus. We wish them a safe travel and pray that they can reach their destination without any further hindrance.

All glories to Sri Guru and Gauranga!

on behalf of Mayapur Administrative Council.