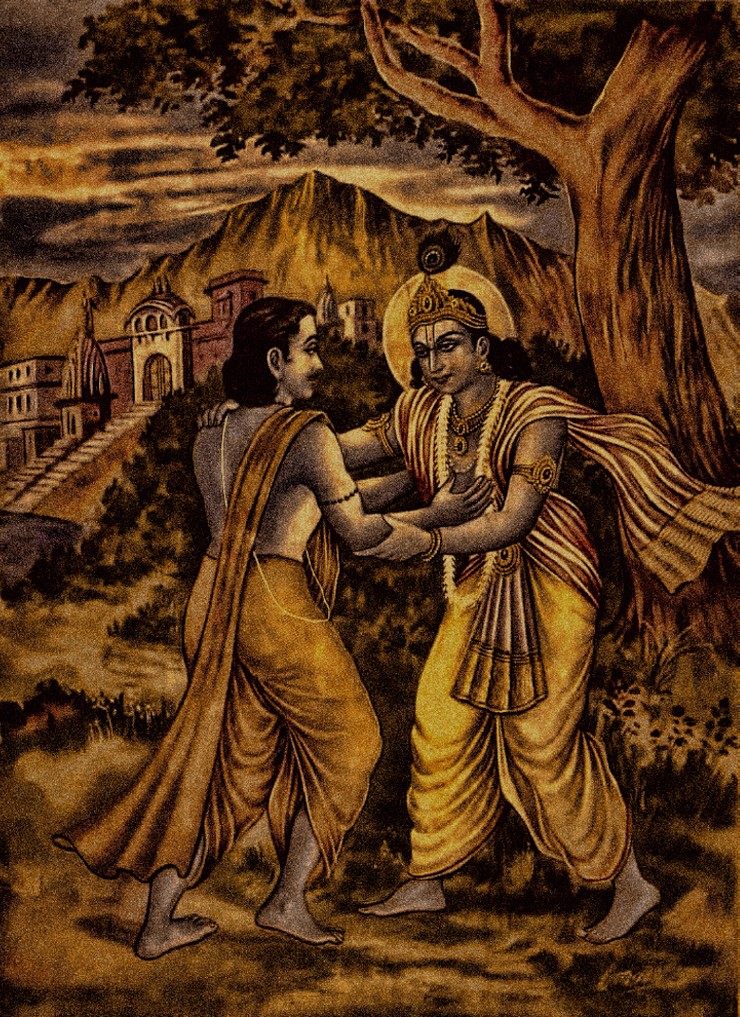 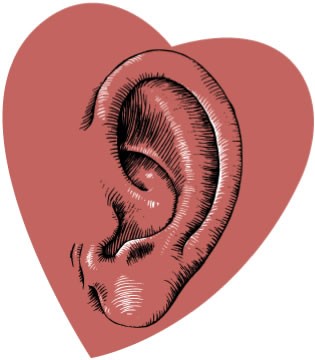 Developing the quality of empathy has many benefits for aspiring devotees of the Lord.

When I was doing my clinical psychotherapy internship in graduate school, a supervisor stressed connecting with our clients through realized empathy. Most of his interns came from privileged backgrounds, and he felt we needed more than just a theoretical understanding of our clients’ pain.

My first session in “experiential empathy” was with Doris, who suffered from schizophrenia. A slight woman in her early 30s, she had an attractive face, but it was worn from exposure, as she would often choose to be homeless rather than stay in shelters. She would often sit in the waiting room carrying on conversations with imaginary persons who seemed real to her.

Doris wasn’t a strong candidate for therapy, yet her case manager and I would provide her support. Once in a while she would have some respite from her illness and would talk about her numerous losses, including relationships, and her dream of being a teacher.

After my initial sessions with Doris, my supervisor had me spend an afternoon in a session designed to develop empathy for schizophrenics. Through earphones, a myriad of voices began to assault me-calling me names and demeaning my character. While listening to these voices, I was given a list of simple tasks to perform, such as going to the corner store to buy batteries. After two hours of listening to the taped voices and running my prescribed errands, I was spent. Physically and mentally exhausted, I joined with others to share our experiences. The training was effective in achieving its goal. I learned more about people plagued by this most debilitating illness and felt increased compassion for them.

My next client was a middle-aged man with multiple sclerosis. Wheelchair bound, he showed symptoms of depression, and his doctor referred him for mental health counseling.

By now I was familiar with my supervisor’s relentless conviction for experiential empathy, so I wasn’t surprised when I saw a wheelchair waiting for me in his office. For the next hour, he had me running small errands throughout the hospital while awkwardly learning to maneuver the wheelchair.

Reflecting on that internship, I appreciate how my supervisor approached this most important element of therapy-joining through empathy. Empathy helps us care about people by identifying with their suffering. It also helps us avoid falling into the trap of thinking we’re superior to others. And it helps us develop humility-the gateway to making spiritual progress and developing a loving relationship with God.
Krishna’s Help

Krishna helps His fledgling devotees by purifying any mentality that prevents them from coming closer to Him. When we form opinions of people and their situations, we should do so with the desire to be of assistance and to please our guru and Krishna. That kind of thinking will help us advance in spiritual consciousness. But if we evaluate others with a mentality of exploiting them or putting them down-to elevate our own sense of importance-that kind of judgment will hinder our spiritual progress.

One of the most unwanted qualities in the heart of a practitioner of bhakti-yoga is the tendency to judge others without concern for their spiritual welfare. This leads to faultfinding and puts us at risk of vaishnava aparadha, or offending Krishna’s devotees. If we are fortunate, Krishna will correct this tendency in our heart. Sometimes Krishna, the originator of experiential empathy training, will place us in a situation similar to that of the person we are judging. Although this can be disconcerting, it is the Lord’s kindness to help uproot the qualities in our heart that are obstacles to loving the Lord and His devotees.

When I was a young devotee, I was strict about attending all the temple programs. But I found myself critical of devotees who didn’t always attend. One devotee suffered from an illness and did her best to come when she could. But I felt she could do better. Not long after those thoughts contaminated my consciousness, however, I became ill and often missed mangala-arati, the early-morning worship.

Krishna accomplishes many things by one action, and one result of my illness was a diminishing of my critical mentality. Krishna has often placed me in situations similar to those of people for whom I lacked empathy, helping me develop more understanding of others’ difficulties.

The saying atmavan manyate jagat means that we tend to see others as we are. Often the very thing we find reprehensible in another is a negative quality lurking within ourselves. So it is prudent to reflect on this when we form opinions of others and to look within our heart to expose our own faults.
Prabhupada’s Example

By his example, Prabhupada taught us to be lenient with others and strict with ourselves. He was uncompromising in his service to Krishna and his daily spiritual practices. Yet he showed understanding and compassion toward his neophyte disciples, who often struggled to follow the basic practices of bhakti-yoga. As his disciples matured, he would sometimes sternly correct them, but only out of duty, to help them progress in their spiritual lives.

In the early days of the Hare Krishna movement, Prabhupada asked one of his first disciples, Syamasundara Dasa, an expert craftsman, to carve a deity of Lord Jagannatha from wood. At one point Prabhupada came to see how the work was progressing. When he entered the room, he saw a pack of cigarettes sitting on Lord Jagannatha’s head.

Prabhupada didn’t need to become addicted to cigarettes to understand his disciple’s plight. He instructed Syamasundara to reduce by one the number of cigarettes he smoked each day until the habit was gone. Prabhupada was a pure devotee, his consciousness crystal clear. Because he had no contamination in his heart, he was free of the propensity to find fault or condemn.

In the Bhagavad-gita (6.32) Lord Krishna tells Arjuna that spiritually advanced persons can understand both the happiness and the distress of others. Because of their own experience in the material world, they understand that people suffer because they forget the Lord and are happy when united with Him.
Saving the Coat

Like all spiritual qualities, empathy or compassion has a counterpart in the material realm. My supervisor was helping me develop empathy, but because he lacked knowledge of the eternal soul within the body, his conception of feeling another’s pain was based on only the body’s suffering. Prabhupada tells the story of a man who jumps into a lake to save a drowning man and returns with only the man’s coat. Born of the material mind, this kind of empathy will have only temporary value unless employed in our spiritual lives.

Srila Prabhupada deeply felt the pain and suffering of the souls in this world. Once, in Mayapur, he saw a scene from his balcony that brought tears to his eyes. Children were fighting off dogs to get food left on discarded plates. Prabhupada then said that no one within ten miles of the ISKCON Mayapur temple should go hungry; they should be fed with spiritually uplifting prasadam. Prabhupada’s compassion meant elevating people’s consciousness so that they could eventually be freed from all suffering.

Empathy is a natural quality of the soul. Following in Srila Prabhupada’s footsteps, we should cultivate concern for the suffering of others while understanding the ultimate goal of life. That doesn’t mean we have to use the means devised by my supervisor-enacting another’s suffering condition. But we can do practical things to develop empathy.

First is to have a student’s mind-an inquisitive mind that seeks to understand the lessons ever present in our environment. The Eleventh Canto of the Bhagavatam gives the example of a brahmana who describes twenty-four entities whom he considered his gurus. For example, he says that he learned valuable lessons from a pigeon, a honeybee, and a prostitute. Being open to what we can learn from others will help us appreciate the struggles of others and feel a connection we might have missed.

Another technique that can help us understand another’s world is reflective listening. Also known as empathic listening, it requires the listener to summarize both the speaker’s words and the feelings behind them.

Another powerful mindset is to practice seeing people for their potential rather than for who they were in the past or who they are in the present. Everyone is a pure soul with an eternal relationship with Krishna. Remembering this can help us see beyond people’s material conditioning, allowing us to care about them and want to help them.

Finally, we want to be in the mood of service to others. When we look for ways to serve rather than exploit, our hearts open and we naturally feel the connection that eternally exists between all living entities.

These are just a few suggestions for how we can move in the world in such a way that we expand the mentality favorable for developing empathy in our role as a spiritual practitioner.

Because of his spiritual perfection, Prabhupada could always clearly diagnose our suffering and worked tirelessly and patiently to give us the remedy. Despite having once said that our hearts were as hard to clean as coal, he didn’t give up on us. Now that Srila Prabhupada is no longer physically present on the planet, we have to extend his compassionate, empathetic nature to all the living entities who have the opportunity to take shelter in Lord Chaitanya’s movement.

When the guru leaves the world, the disciples have to rise to the occasion and take up the legacy of their beloved teacher. The guru will empower sincere disciples to carry on the mission. Sincere disciples of a Vaishnava guru are themselves Vaishnavas, deserving of the prayer offered in ISKCON temples each morning: “I offer my respectful obeisances unto all the Vaishnava devotees of the Lord. They can fulfill the desires of everyone, just like desire trees, and they are full of compassion for the fallen souls.”