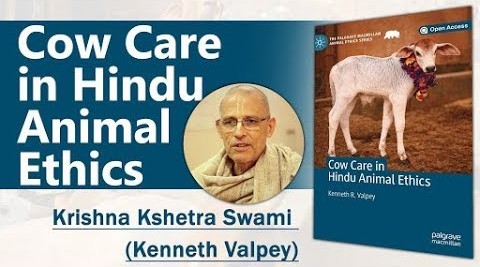 (soon to be published, in Hindi translation, in Dainik Jagran)

Interviwer (Mr. Kalakantha Das) – I have with me Dr. Kenneth Valpey, also known as Krishna Kshetra Swami. He is a scholar from Oxford University in the U.K., a Research Fellow of the Oxford Centre for Hindu Studies and a Fellow of the Oxford Centre for Animal Ethics.He has written a few books related to Hindu traditions, and his latest book, published this year, is called *Cow Care in Hindu Animal Ethics*, published by the international academic publisher, Palgrave Macmillan. He has been regularly visiting India since 1978. Dr. Valpey, what was your inspiration to write this book?

Author -- The subject called “animal ethics” has become one of great interest and relevance in academic circles, in philosophical discussions about human relations with animals. In Oxford we have one research institute called the Oxford Centre for Animal Ethics. The Director of this Center, Professor Andrew Linzey, is also the chief editor of a book series on animal ethics of the academic publisher Palgrave Macmillan, and he invited me to write on the subject--specifically Hinduism and animal ethics. To this topic I added the more specific theme of cows in Hindu animal ethics.

Interviewer-- In India it is very common that when we talk about cowsCow Care in Hindu Animal Ethics by Krishna Kshetra Swami , the subject evokes strong emotionsin many people. Sothe question may come, Why only the cow? I mean why do cows have a prominent position in India, when we talk about human relations with animals in general?

Author -- The prominent position of cows in Indian culture goes way back to the earliest of the Sanskrit literature, the Veda -- Rig-Veda. Already from the time of the Rig-Veda there is a recognition, I would say, that cows are very much tied in with human well being. This relationship is on many levels, not just the material economic level of wealth as well-being, but also on the deeper level of our deeper consciousness, of our psychological well-being, and the well-being of the environment as a whole. All different features of what we generally in English call well-being today are served by cows. This is a very ancient understanding, and not only ancient, but in the present time people also appreciate this quality of cows.

Interviewer -- So would you say that from the Indian tradition the cow has a central position in other aspects beyond economics?

Author -- Yes, very much so.If it were only about economics, if it were only about the physical products of cows, I don't think we would see the extent of concern that we do for cows and also the intensity of the emotional dimension that we find in the matter of cows, not only in India but actually in many traditions worldwide in earlier cultures. Cows, both female and male, go-vamsha--cow's progeny-- including male, have been very highly valued. They have been valued in many cultures not just as sources of food for humans, but as living beings of a special quality.

Interviewer -- In ancient scriptures of India specifically, the cows have been always revered as representative of dharma. Is that a point you present in your book?

Author -- Indeed I do. The essential idea of dharma is often forgotten nowadays. Dharma originally meant “that which is sustain”, or “that which upholds the human order and cosmic order”. So we have this kind of buzzword in english—*sustainability*--we are very much concerned about the environment. But actually, talk about sustainability exists since ancient times: when dharma is properly comprehended and practiced, sustainability on all levels naturally follows. Cows are integral to the maintenance of the culture of sustainability; hence they are representative of dharma. Again, this is the case on many levels.

Interviewer -- In the West there is a movement called “veganism” (avoiding all animal-based food, including dairy). People who identify themselves as vegansare blaming cows for environmental disorder. Do you comment on that in your book?

Author -- Yes, this is discussed. The vegans have some very good points which I think we can all learn from, especially the real necessity for us to really stop exploitation of animals for our own interests. The entire agro-industry, animal production industry, which includesdairy, includes meat, skins of animals (leather) and so on—the promoters of the vegan movement know that these kinds of exploitations need to be stopped. And at the same time vegans don't seem to be fully informed with respect to the bigger picture of proper human-animalrelationships. As long as agro-industry is done as it is done today—for example the industrial form of keeping animals that is called CAFOs (Concentrated Animal Feeding Operations)--such large scale taking of animals as commodities is certainly contributing very high percentages to environmental damage. The beginning of this damage is in destruction of the forests for growing the feed for these animals that will then be killed. But it also includes the concentration of the cows in these CAFOs and then the improper processing of the cow dung, instead of using it for fertilizer and production of bio-gas. But that's a big topic. I touch on it briefly in the book.

Interviewer -- It seems that from what you have just described, if dharma is connected to the sustenance of the world, actually doing something which harms the cows could be a kind of reaction of the planet as a whole towards such harm. Is that so?

Author -- Yes.Some philosophers very recently have been speaking about how in a sense the earth has a whole—conceivedas a kind of living entity (“Gaia”)--is, so to say,“biting back” because of our mistreatment of the environment in so many ways. Not only the wholesale slaughter of cows, but also of so many other animals. More than 50 billion--some sources estimate more than 70 billion--land animals per year are slaughtered by humans. Certainly we are getting painful and far-reaching reaction for this, most obviously occuring in the form of climate change (with storms, draughts, desertification, and so on).

Author -- Indeed.Let me first say, on this topic, that I really personally like desi cows. They are certainly special in many ways, out of all the different cow breeds of which there are some one thousand listed in some resources. My favorites are what Indians like to call “desi” cows. I discuss two points about this in the book.One is that it is certainly important and valuable and enriching for all of us if all of these desi breeds are protected and sustained so that these breeds don't get lost. And we want to see them thrive. But, second, to say that these are the only cows is a kind of mis-information.There are different sub-species of bovines, of which the general term for the Indian cows is Bos Indicus. This is one major division or sub-species of cows. Another major division is called Bos Taurus, which is what we find in most other countries of the world. They are all cows. They are Bos (bovinea). And it's understood within the wider tradition and the longer tradition--not just in recent years but the longer tradition, that cows are cows and they are all to be cared for, they are all to be protected. To be indigenous is to be well-adapted to local conditions, Indian cows do very well in India. But other places have their own indigenous breeds, and they need to be at their places, according to local conditions. But all breeds of cows are benefiting the whole planet, each in their own ways. We are interested in the well-being ofthe whole planet, and I think others are as well, not only the well-being of India. But we have a very rich tradition in India of cow care and therefore the focus in the book is on this.

Interviewer -- In India we have had the tradition that cow-centered agriculture was practiced, and as a result,there was great wealth and opulence in this country. It is said that it was this opulence of India that attracted the British colonial effort. What do you understand about the economics of cows?

Author – First I have to say that I am not an economist, so my knowledge and understanding of bovine economics is a work in progress. What I have discussed in the book in this connection is mainly the economy of goshalas. The truth of the matter is thatgoshalas in present-day India are largely maintained by the support of charity. They are not self-sustaining. But this may not be altogether a bad thing, because charity means that people are giving for cows, and this becomes a kind of service to cows, go-seva, which we understand from shastra is highly beneficial for whomever engages in it. At the same time what we understand is that there is an urgent need to identify models of self-sustaining cow care programs in which reintegration of cows with agriculture, with farming, can be shown, can be realised. People were doing farming with cows and bulls for thousands of years, so it's not that they are uneconomical, they are economical. Just we have to recover that process.

Interviewer -- This book has been published by aninternational academic publisher, Palgrave Macmillan. How may the academic world, or researchers, benefit from this book? What kind of message would you give to them related to this specific work on animal ethics.

Author  – This book may be read by a wide variety academics in various fields of scholarship and research. There are all kinds of specialists including those who study South Asia, those who study religion, those who study Hinduism, cultural anthropologists, political scientists, andtoday there are also increasing numbers of specialists in enviromental studies. Also there is a field developing called Animal Studies, within which we find Animal Ethics which is then also connecting with philosophy. So I would hope that people, scholars in all these different fields, willread the book and appreciate that this is a serious subject which they should take into account in their own research and in their teaching. And I would hope that these scholars would also encourage their students to read the book and get some understanding of how important the subject is.

Interviewer -- So is the book only for academics?

Author — No, certainly not! I have written the book specifically with a wider audience in mind, so even if it has a somewhat academic “style” (such as having many footnotes and references), it should be of interest and benefit for anyone with a serious interest in the subject.

Interviewer -- How does one get a copy of the book?

Author --*Cow Care in Hindu Animal Ethics* is available by ordering it through the Internet, either directly from the publisher, or through one or another among online book outlets. I should especiallycall attention that this book is available not only as a regular hardbound book (which is not inexpensive, coming as it does from a foreign publisher), but it is also available for download in digital format (pdf or epub) directly—and legally—from the publisher. This is possible through the Open Access platform of publishing. Just by searching the book title on Google, you can find the webpage of the book, where you will find a button for downloading the electronic version. Everyone is also welcome to share the link with friends. At present, I should add, in the first three months since the book was published, the electronic version has already been downloaded more than 16,000 times.

Interviewer -- That’s amazing! So people are definitely interested in your book, because they are concerned about cows. It sounds like this book is going to have significant influence in India.

Author — Not yet. But if a reputable publisher of Hindi non-fiction comes forward with interest to publish the book in Hindi, we can work on making an agreement with the English version publisher, and then it should be easy to arrange for a good translation to be made and published.