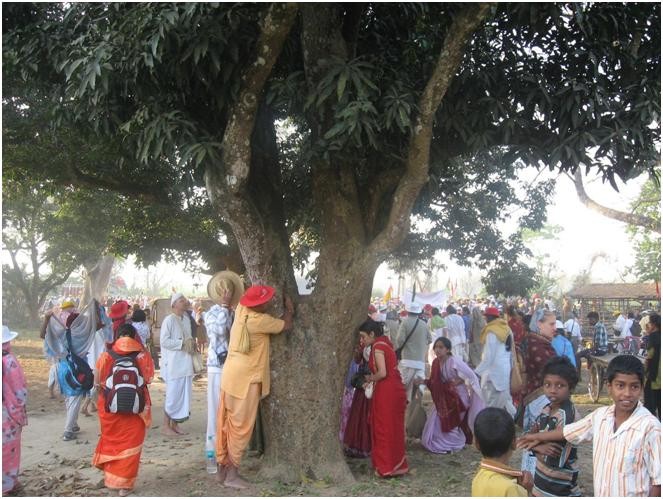 Ecology: the study of the relationships between living organisms and their interactions with their natural or developed environment. 1

We have been hearing the term ecology popularly in use since the seventies. People have become very concerned with nature’s welfare. Some scientists spend their entire lives researching how to save a particular community of animals. There are organizations to save the elephant, Panda, plankton, frog, jungles, etc. This is only natural because the spiritual world is the beautiful, natural environment with which we are originally associated. In His Vrndavana, Sri Krsna protects cows, prevents fires, talks to the animals and enjoys the pure forest atmosphere. The cowherd boys are decorated with minerals from the caves and newly sprouted leaves and flowers.

Meanwhile, in the material world, billions of dollars’ worth of research and adjustments cannot save many of earth’s ecosystems. Life is threatened by a development that has only recently come to the attention and debate of the greater public: climate change. Carbon dioxide and methane emissions are increasingly trapping heat from the sun light into earth’s atmosphere.

The planet is warming to a degree beyond what many species can handle, altering or eliminating habitat, reducing food sources, causing drought and other species-harming severe weather events, and even directly killing species that simply can’t stand the heat. In fact, scientists predict that if we keep going along our current greenhouse gas emissions trajectory, climate change will cause more than a third of the Earth’s animal and plant species, to face extinction by 2050 — and up to 70 percent by the end of the century. Such a catastrophic loss would irreversibly diminish biodiversity, severely disrupt ecosystems, and cause immense hardship for human societies worldwide.2

If climate change is for real, it is very bad news for life on our planet. Srila Prabhupada said a devotee is so compassionate that he will hesitate to harm even an ant. Are we powerless to do anything? Why does the sun, which the Vedas describe as the symbol of the eye of God, feel as though it is torching the planet on which we live?

Some say climate change is purely an act of nature. Others say it is human driven, mainly due to the burning of fossil fuels into earth’s atmosphere. The International Governmental Panel on Climate Change, a group of 1,300 scientists from all over the globe, under the auspices of the United Nations concluded in their presentation to the public sector that there is more than a ninety percent probability that human activities over the past two-hundred fifty years have warmed the planet.

To understand the future of the changes we are making to earth’s atmosphere, there are three key figures. The first is 2 degrees Celsius. That is the number that the Copenhagen Climate Conference selected as the absolute maximum amount of warming that can take place without extreme consequences. This 2 degrees is the “bottomest of lines,” with any higher temperatures to result in total acidity in the oceans, complete melting of artic ice, increase in humidity above oceans to trigger disastrous storms and flooding, as well as cataclysmic destruction to the environments in Africa, Australia and other drought prone countries.3 (Drought is the most common cause of crop failure in India where a farmer’s suicide occurs once every thirty minutes.4)

The second number to take note of is 565 gigatons. That figure directly relates to how much additional carbon can be burned into the atmosphere without sending the average planet temperatures above 2 degrees Celsius.

2,795 gigatons is the amount of carbon already existent in the proven oil and gas reserves of the fossil fuel companies. In short it is the fossil fuel we are already planning to burn. Five times greater a number than the number of 565, which would hold us to the 2 degree Celsius warming limit. This coal and gas is technically in the soil. But it’s already economically above ground. It’s figured into share prices, companies are borrowing money against it, and nations are basing their budgets on it. Those 2,795 gigatons of carbon emissions are worth $27 trillion…We might as well burn all that carbon and investors will do fine, but if we do, the planet will crater.5

The second largest cause of global warming is methane gas. 27% of methane gas emissions are the by-product of animal farming. Ruminating animals such as cows, sheep, and goats exude methane gas during their digestive processes and from their dung.

While we fill the air with carbon dioxide, blindly putting life on earth at risk, materialistic society continues to lavish love on pets and wildlife. Organizations such as People for the Ethical Treatment of Animals have gained strength, popularity and some legal clout over meat producers, puppy farms, circuses, rodeos, zoos, etc.

Yet with respect for the work of these pet rescuers, humane law enforcers and ecologists, devotees can easily see the dissonance in their proactivity. For example, “humane slaughter” laws do little to protect livestock. The pet industry profits greatly from the meat industry. Ecologists have become helpless to re-establish countless destroyed or sun baked habitats. Maya’s influence is very strong. If any change is to take place, it will have to start with the spiritual mental health inside of ourselves, not only with a web site or a green t-shirt.

We are now unprecedented in the destruction of unwanted

driving force of an extinction rate estimated one thousand times

greater than the rate which occurred before human alteration of the

animals in the United States. The estimate for world slaughter is one

Animals are bound by the laws of nature. Unlike humans, they do not break the laws. They are, in their own artless ways, more in touch with their creator than the modern Kali-yuga man who has become an expert at sense gratification. The eight million, four hundred thousand species of life are still trying, although it is perhaps the most pathetic struggle in their history, to simply sustain their lives in the midst of relentless peril due to human competitors, predators and exploiters. Repeated birth and death is the fate of all embodied souls, but now the tables are turned in such a way that the variety of amazing life forms will be no more. At the end of Kali-yuga, when Kalki is about to appear, the earth becomes twelve times hotter and reduced to dust.

Srila Prabhupada challenged many times, Mr. Scientist, you have invented so many ways by which to kill. Can you invent any means by which man may live? Can you put an end to repeated birth and death?

Life on earth is misinterpreted by materialistic modern science, politics, and animal husbandry. They fail to see Krishna’s reason for the creation. The Vedic wisdom tells us that the eight million, four hundred thousand species of life we see on earth are a series of temporary terms of existence designed by our creator for repeated birth and death. When we arrive at the human form of life it is a time of awakening. It is a time for the cultivation of divine appreciation, not nuts and bolts.

One who sees all living entities as spiritual sparks, one in quality with the Lord, becomes a true knower of things. What, then, can be illusion or anxiety for Him?

This World is not our Home

As devotees we like to show respect for Krishna’s creation. We may drive a car with fewer emissions, or use public transportation. We may purchase or grow ethically farmed foods, recycle our recyclables and practice cow protection. Simply being vegetarian means we contribute a great deal less to toxic waste problems than non-vegetarians do.

While there are no easy, quick fix solutions, this time of global uncertainty is excellent impetus for self-realization. We can garner a lesson which has been a long time in the making. Climate change convinces us that the universal, infallible law of justice is a scientific fact.

We are very conditioned to the convenience og the amenities that we grew up with, filling our tanks and driving all over, flying in planes, taking much advantage from running electric appliances. Now a huge karmic fallout is making its debut. It will cause financial and physical hardships for future generations and for also us in this very lifetime: acidic oceans, desertification, severe weather events, scarcity, drought, famine and devastation to at least some of earth’s natural beauty.

How to make a difference? The way that material civilization is arranged at this time in history makes it nearly impossible to go about one’s daily duties without leaving a “carbon footprint.” To completely stop it all together we have two extreme choices: 1) give up all forms of work entirely, 2) become so expert in self-sufficiency we do not interact with any agency of further environmental contamination.

But Srila Prabhupada did not recommend that we limit ourselves in devotional service, or in what we could do to further the mission of Krishna consciousness. Working for Krsna and the spiritual master is not contaminated by material interactions. He did not even suggest that we give up the ordinary work which is born of our own nature:

Every endeavor is covered by some fault, just as fire is covered by smoke. Therefore one should not give up the work born of his nature, O son of Kunti, even if such work is full of faults.

This example of the fire and the smoke is very appropriate. When in wintertime one takes a stone from the fire, sometimes smoke disturbs the eyes and other parts of the body, but still one must make use of the fire despite disturbing conditions. Similarly, one should not give up his natural occupation because there are some disturbing elements. Rather, one should be determined to serve the Supreme Lord by his occupational duty in Krsna consciousness. That is the perfectional point. When a particular type of occupation is performed for the satisfaction of the Supreme Lord, all the defects in that particular occupation are purified. When the results are purified, when connected with devotional service, one becomes perfect in seeing the self within, and that is self-realization.

Prabhupada’s message is appropriate now more than ever. We are surrounded by a rather insipid, invisible smoke which increasingly pervades earth’s atmosphere. When nearly every place in nature has been compromised by it, devotees should not loose heart. There is simply nothing we can do that will satisfy us as much as to continue to serve Lord Krishna. Making huge material adjustments will not bring any happiness or relief. Self-realization is the only gentleman’s way out of here. Goloka Vrndavana is the pristine destination. That is the only perfectional point. This is a non-permanent, miserable place, it is not our real home and it never will be.

Scientists and politicians will certainly grapple to put forth a positive solution for the problem of climate change. Meanwhile devotees need only try to make this earth as nice as possible in the form of Krishna conscious environments such as nice temples, big kirtans, eco-friendly farms, prasadam restaurants, etc., in order to encourage others and our own selves in self-realization. At the same time we keep in mind that Krsna has meant this planet for our rectification, not for permanent residence. The ecology of the heart is the beginning of any hope for external change. Ecology devoid of the study of humanity’s relationship with the Supreme Living Being will always be the study of living beings in a crisis.