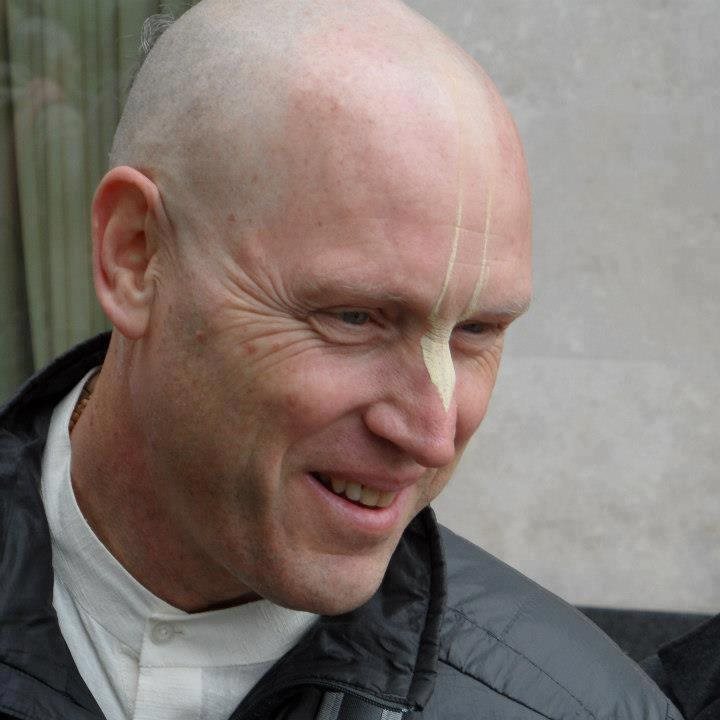 Worries about terrorism, escalating healthcare and living costs, global warming, nuclear proliferation, and widespread violence are just a few of the concerns that plague people around the world. People everywhere are looking for peace, prosperity and happiness, but in Kali Yuga, these things are hard to find.

Fortunately, however, everyone can get relief from all material pangs by participating in Lord Caitanya’s Sankirtana movement. Sankirtana, the congregational chanting of the holy names, simultaneously cleanses one’s heart and vanquishes suffering, while giving even beginners a taste of real happiness.

Srimad Bhagavad tells us that the root of all worldly afflictions is forgetfulness of Krsna. The remedy is Sankirtana. As such, Lord Caitanya ordered every human being within this universe to accept the process and to help Him spread it everywhere (Cc Adi 9.36).

“The fruit of love of Godhead distributed by Caitanya Mahäprabhu is such a great intoxicant that anyone who eats it, filling his belly, immediately becomes maddened by it, and automatically he chants, dances, laughs and enjoys.
When Sri Caitanya Mahäprabhu, the great gardener, sees that people are chanting, dancing and laughing and that some of them are rolling on the floor and some are making loud humming sounds, He smiles with great pleasure.” Adi 9.49-50

Another muni, Karabhajana, who lived thousands of years ago, described the importance of Sankirtana like this:

“Those who are actually advanced in knowledge are able to appreciate the essential value of this age of Kali. Such enlightened persons worship Kali-yuga because in this fallen age all perfection of life can easily be achieved by the performance of sankirtana.” (S.B. 11.5.36)

Yet, even with these benefits, devotees often find themselves too busy or distracted to personally perform Sankirtana. However, this December, there’s a good opportunity for everyone to take part.

During the holidays, people tend to embrace – or at least to ponder — spiritual values like generosity and kindness. In this mood, they more readily accept prasadam, books, and spiritual association and they reciprocate generously with donations and words of appreciation for our work.

Adding to this, more people than usual come out of their homes and businesses at this time of year to shop and to attend social events.

For these reasons, the “Christmas Book Distribution Marathon” has endured for many years.

Srila Prabhupada always took special notice of the book scores from around the world and was particularly pleased to hear that his followers were increasing book sales and sending money to the BBT. Clearly, he was also aware that December was an especially good month for selling books. This is evident in the following response he wrote to Bali Mardan prabhu – the temple president of the New York temple in 1972 – who had sent him a favorable Sankirtana report. Srila Prabhupada wrote:

“Now December is finished and I think in your country this month is the best month for spending, being the Christmas season, so I shall be anxious to see what was your collection for December and what was your net savings. I note also that your expenses have remained almost constant for so many months, except for the money paid to book fund, which is increasing more and more, so that is the best system: pay to the books fund larger and larger sums, keep other expenses constant as much as possible or reduce . . .” On December 31, 1972

Srila Prabhupada loved to hear that the devotees were distributing large numbers of his books and he consistently encouraged them to sell more of them. He once wrote, “These books and magazines are our most important propaganda weapons to defeat the ignorance of maya’s army, and the more we produce such literature and sell them profusely all over the world, the more we shall deliver the world from the suicide course.” Letter to Jayadvaita, 18 November 1972

So, have some real fun and make your plans now to go out this December to distribute books, prasadam and the holy names. Organize your family, yourself, or your temple, so that you’re ready for this once-a-year opportunity.

Although the entire season is favorable, here are a couple of events worth noting for this year’s book distribution marathon:

Gita Jayanti, the advent of Bhagavad gita.
The best way to observe Gita Jayanti is to study the Gita and to distribute it. For this event, many temples buy large quantities of Bhagavad-gitas from the BBT to sell to their congregation members at wholesale. These members may then enjoy personally distributing them to friends, family and co-workers. Others “sponsor” Gitas, paying for them in advance so that other devotees can distribute them to the public on their behalf.
Some temples distribute thousands of Bhagavad-gitas in this way.

In whatever capacity you decide to participate this December, you’ll find true happiness and will gain solid spiritual advancement by performing the Yuga dharma — Sankirtana.