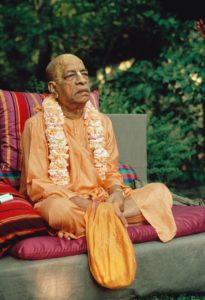 “I am happy to hear that you continued to chant despite so many doubts and skepticism. That is the process. Even there may be doubts and skepticism, but if one continues the chanting process, the doubts will all disappear, and real knowledge will be revealed by the grace of Krishna. The example is given of the jaundice patient. He is suffering from disease, and when given sugar candy, which is the cure, he finds it very bitter and distasteful. But that does not mean the sugar candy is not sweet and delicious; it is simply due to his diseased condition that it seems bitter. In order to be cured from his disease, he must take the medicine of sugar candy, despite the apparently bitter taste, and as he becomes cured, the real sweet taste of the candy is gradually revealed. Similarly, we are diseased, and only if we take to this chanting process may we be cured. Maya may put so many doubts and worthless arguments into our minds, but if we continue the chanting, the curing process will go on, never mind the doubts, and gradually we will get a taste of that sweet nectar of Krishna nama-sankirtana. That is the process. And you may explain it to all your friends, so they may understand the nature of their doubts and skepticism, and be benefited.”