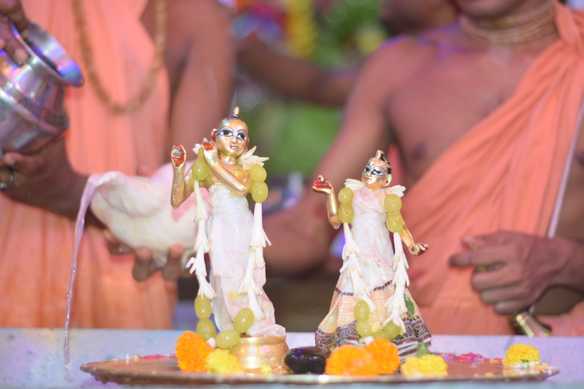 Hare Krishna, this year Janmastami festival was celebrated with great joy and enthusiasm in Bangladesh. Thousands of devotees gathered together for a huge extravaganza. Janmastami festival is celebrated as the holy appearance day of the Supreme Personality of Godhead, Lord Sri Krishna. Srimad Bhagavatam told, Krishna is the only God and all others are his expansions. Various acharyas like Shankaracharya, Madhavacharya, Ramanujacharya, Chaitanya Mahaprabhu have accepted Lord Sri Krishna as the Supreme Personality of Godhead.

Krishna means all attractive. He attracts even atheists in his incarnation as Lord Buddha. Nowadays, common faithful persons of society are attracted hearing about him through his pure devotees. A pure devotee is always ready to render service and glorify the wonderful activities of the Lord. Krishna’s birth and activities are all transcendental and those who understand in truth about the glories of the Lord, they became free from the cycle of birth and death. To understand this principle and get the benefit one should follow the path showed by an acharya who successfully followed the teachings of Bhagavada Gita.

In Bangladesh also, crores of people celebrated Janmastami festival this year after lockdown on Friday, 19th of August, a national holiday. Grand festivals were organized in thousands of temples all over Bangladesh to welcome Lord Krishna. There is no such personality in the history who is remembered with same joy so long. This is the glory of Lord Krishna, he is the Supreme Lord and the father of everyone.

ISKCON Netrakona celebrated Janmastami festival at Sri Sri Jagannath Ballav Temple, Netrakona, where thousands of devotees gathered from morning up to 12:00 a.m. midnight. Devotees did full fasting from grains and vegetables, some even fast from water and other eatables. This fasting is observed to engage our time in remembering Krishna by reading his glories, by listening his glories, doing Kirtan and inviting others to listen Krishna Katha. Every year hundreds of devotees make thousands of sweets and various nice items on the occasion.

Lord Krishna appeared in Mathura and after that he goes to Gokula in the house of Nanda Maharaja and Yashoda Mata. The residents of Gokula were very fortunate to associate with the lord and have his darshan daily. They exchanged loving service with the lord directly. The residence of Braja serve the Lord in spontaneous devotional service, Raganuga bhakti, without any external material motives. This spontaneous devotional service is the natural tendency of the jiva, the soul, which can be revived by following the process of Krishna consciousness given by Srila Prabhupada founder Acharya of ISKCON. 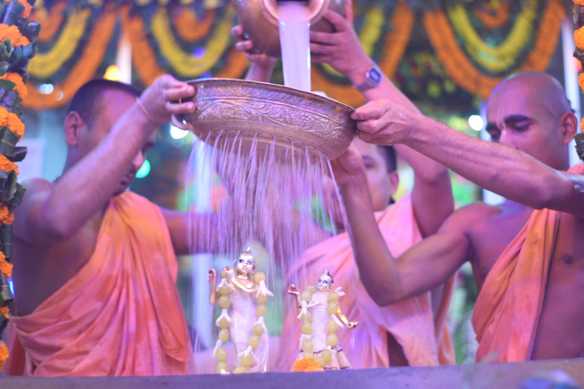 ISKCON Netrakona had celebrated Janmastami with grand arrangements, where many young and enthusiastic devotees took part. Various programs such as kirtan, abhishek, dancing, chanting, prasadam distribution, lectures and drama make the festival very jubilant. Lord Krishna took birth in night around 12am, hence everyone fast whole day and wake up to midnight for abhishek of the Lord. Engaging ourself in various Krishna conscious activities during the festival purifies the heart and Krishna showers his mercy on everyone and someday Krishna may reveals himself. Krishna is a Supreme god, we cannot understand him by our tiny brain, only by our surrender service and humble attitude he may reveals himself through a bonafied spiritual master. .
Next day, Srila Prabhupada Vyasapuja and Nanda Utsava, both festivals were observed there and thousands of devotees took prasadam in afternoon. Srila Prabhupada, a pure devotee of the Lord, a mahabhagavata, who has made thousands of devotees all around the world and is still preaching through his books.
This year other preaching centres also celebrated the festival with great devotion and endeavour.

Also, this year June, His Holiness Subhag Swami gurumaharaj inaugurated new temple building and Sri Sri Gaura Nitai Deities. On the day of janmastami temple was fully packed with devotees. In front of Gaura Nitai deities, devotees were chanting loudly with ecstatic dancing. Drama was presented kids and so many cultural programms were presented for the pleasure of the Lord. Next day also devotees celebrated Srila Prabhupada vyasa puja.

One year ago, by the inspiration of His Holiness Subhag Swami maharaja, some young dedicated brahmacharies opened one small preaching center in the heart of Mymensingh City. Very enthusiastically, first time they arranged the janmastami festival . From morning to mid night, whole day japa & kirtan mela. Almost five hundred devotees take part on this auspicious occasion.

Sri Govinda Mandir, Jhenaidah, little far from main town also celebrated janmastami festival. Village people were very excited and thousands of them visited the temple and took blessings of the Lord Govinda who gives pleasure to cows and peoples of braja.

Vedic chants of the Hare Krishna mantra, keynote talks and complementary multi-course vegetarian dinner for all the guests.
All glories to Sri Sri Guru and Gauranga, All glories to Bangladesh all community .