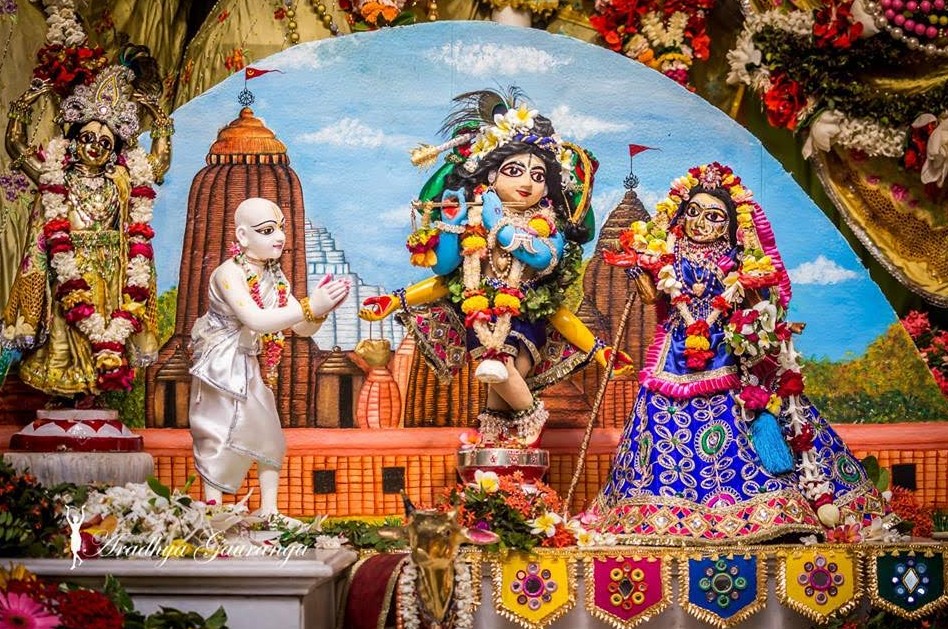 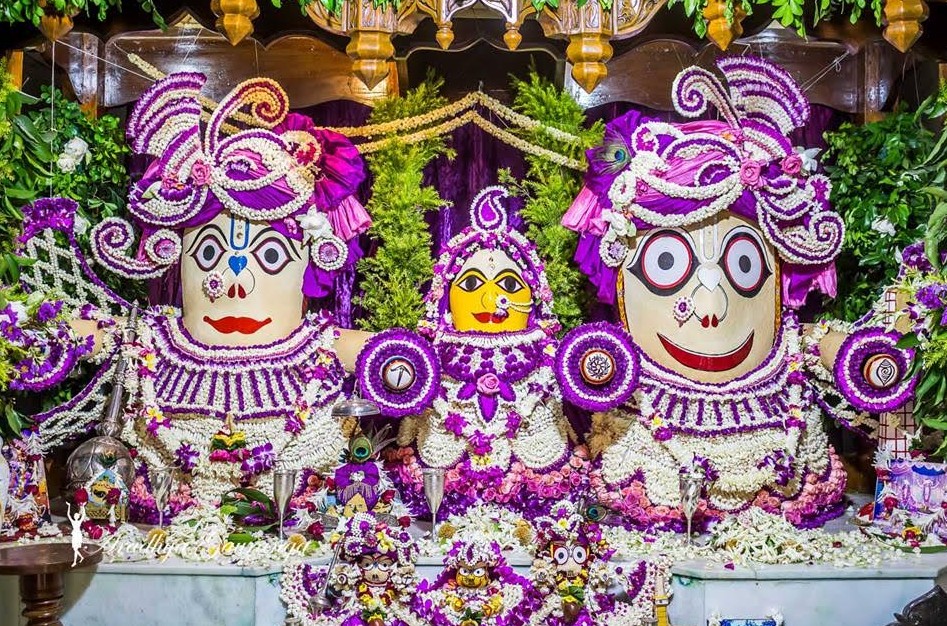 In the Skanda Purana (Utkala-khanda, Chapter 29) it is described that Lord Jagannatha instructed King Indradyumna to keep His transcendental body cool by applying sandalwood paste all over His divine form:

“Smear fragrant sandalwood paste on My body on the day of Aksaya-trtiya during the waxing moon in the month of Vaisakha.”

This festival is called the Candana-yatra festival, which literally translates to the festival of sandalwood paste. Every year during the hottest part of the summer, Lord Jagannatha and His brother Sri Baladeva and sister Subhadra Maharani are wonderfully decorated with sandalwood paste lovingly made by the hands of Their devotees.

During the first week of the festivities, Lord Jagannatha is taken on a procession to Lake Narendra, where He performs His wonderful boating pastimes. The Lord also wears various dresses, or vesas, which depict His various pastimes. Some of the dresses depict Krishna as Natabara, the best dancer; Krishna as Sadbhuja Gauranga, the combined form of Sri Krishna, Lord Ramacandra and Sri Caitanya Mahaprabhu; Vastra-harana, Krishna stealing the clothes of the gopis; and so on.

In Sridhama Mayapur, the ISKCON Rajapur Jagannatha Mandir is considered to be nondifferent from Jagannatha Puri. There, as in Puri, Lord Jagannatha celebrates the Candana-yatra festival. The forms of the Lords are covered in candana and dressed in different vesas. Lord Jagannatha also enjoys wonderful boating pastimes in the pond that is located behind Jagannatha’s temple. Devotees from Mayapur, Rajapur, and the surrounding communities cook and bring offerings for the Lord of the Universe who enjoys boating pastimes with His brother and sister on His opulent swan boat.

Every year, the Mayapur Candana-yatra team designs and makes new dresses for small Radha Madhava for each day of Candana-yatra. They stitch and decorate the dresses, and make complimentary jewellery out of beads, cloth and flowers. They also plan and make the decorations and props needed to help display the particular pastimes being depicted in the vesas. These decorations include chariots, trees, the giant Agasura snake, clay figurines of the Vrajavasis, and more. This small team of Mayapur community devotees begins planning for the festival many months ahead of time, and the results are breathtaking! The intricate detail and effort put into this service is very apparent when the Lord’s curtains open for each amazing darshan.

During the Candana-yatra festival, Sri Sri Radha Madhava go out every evening for seven days on procession to Srila Prabhupada’s Puspa Samadhi, where they are taken around the decorative pond (affectionately referred to as Srila Prabhupada’s pukur, or pond, by local devotees) in a swan boat, ornamented with fragrant and colourful flowers and garlands. As Their Lordships go around Srila Prabhupada’s pukur, the devotees make offerings of various foodstuffs, flowers, lamps and most importantly, their prayers. As the boat encircles the pukur, one or two devotees lead a glorification of the Divine couple by singing beautiful songs such as Sri Vraja Dhama Mahimamrta (Jai Radhe Jai Krishna Jai Vrindavan) by Krishna Dasa, and Sri Krsnaer Vimsottara Sata Nama (Jaya Radha Madhava kunja bihari) by Bhaktivinoda Thakura.

As the boat takes Their Lordships around Srila Prabhupada’s pukur, a massive, multi-coloured water fountain sprays water high into the sky, and a gentle summer breeze carries and offers its fine mist to cool the transcendental bodies of Srimati Radhika and Her Madhava, and then to the masses of Their loving devotees gathered around the edges of the water. Once dusk arrives, the beautiful swan boat stops in the middle of the pukur and a stunning Sandhya Arati is performed for Sri Sri Radha Madhava.

As the Divine Couple enjoy wonderful water pastimes, Their pujaris, who are the acting boatmen of the Lord, begin to slowly rock the boat from side to side. The devotees gathered joyfully laugh at the beauty of Their worshipable Lord enjoying with His consort, but then, the ‘boatmen’ begin rocking the boat more violently. For some devotees, their joyous laughter turns to shouts of fear – fear that the boat might tip over and sink! – while others internally enjoy this blissful sight, for within their hearts they see Srimati Radhika holding onto Her Madhava for protection as the boat rocks, which was His intention all along.

After the Divine Couple enjoys water pastimes, They are then carried to a nearby swing, beautifully decorated with wonderfully scented and colourful flowers. After the Deities are properly welcomed and offered some refreshments, the devotees are given a golden rope to swing their worshipable Lord. During this time, the song Sakhi Vrnde Vijanpti (Radha Krishna prana mora) by Srila Narottama Dasa Thakura is beautifully sung, and the devotees blissfully sing and swing the Lord of their hearts. As the devotees ecstatically swing the Divine Couple, the Lord sends cooling breezes and showers of rain, almost as if to relieve the devotees’ apparent fatigue from pulling the swing.

The first day of Candana-yatra typically falls on the auspicious day of Aksaya-tritiya, which falls on the third day of the bright fortnight in the month of Vaishakha,vaisakha-sukla-paksa-tritiya. This day is considered one of the most auspicious astrologically on the Vedic calendar. It was on Aksaya-tritiya that the sixth incarnation of Lord Krishna, Parasurama, appeared. Mother Ganga’s holy waters also descended upon this planet on this day. It is also the day that Srila Vyasadeva began composing the Mahabharata. In addition, our Founder-Acarya, His Divine Grace A.C. Bhaktivedanta Swami Prabhupada, established the League of Devotees at Jhansi in 1953 on Aksaya-tritiya.

The Candana-yatra festival perfectly exemplifies the sublime and wonderful nature of Krishna consciousness. Krishna consciousness is simply sublime because we are constantly engaged in serving Krishna somehow or other. The Lord gives us so many opportunities to glorify Him by engaging our actions, thoughts and senses! Our eyes witness the loving pastimes of the Divine Couple and drink the beauty of Their transcendental forms. Our noses smell the fragrant flowers and incense that has been offered to the Lord. Our tongue can taste the nectareanmaha prasadamcoming directly from the Lord’s lips, as well as the Lord’s sweet names. Our hands can offer lamps, flowers and bhoga, and receive theprasad remnants from Their Lordships. And our ears can hear the sweet symphony of auspicious sounds, such as mantras, songs, bells, ululating and the most wonderful songs glorifying the Divine Couple. 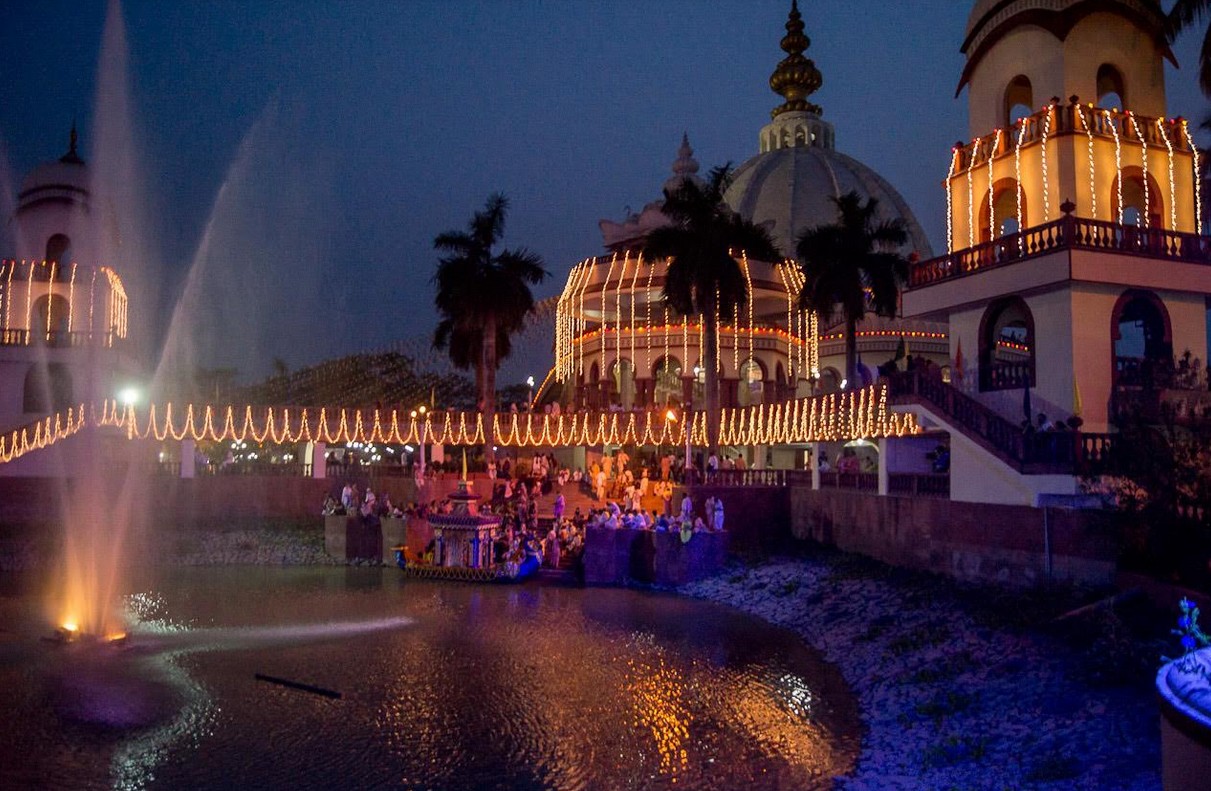