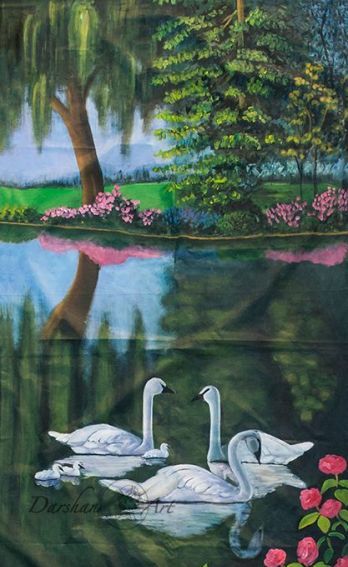 An old brahmin priest lived in a holy place, at an ashram, with his seven disciples. There they worshipped some very old and famous Deities of Radha and Krishna. Many people would come to see these Deities and make donations for Their worship.

The guru, however, was growing weak due to old age. He knew it was time to soon leave his body, but did not feel confident to hand over to his disciples the entire service of these Deities.

One day a pilgrim donated a large ruby to the Deities.

I think it should be sold for money, “One disciple declared.” “No, no!” another cried. “Radha should wear it.” Yet another gave his opinion, “It would be far better if we cut it into many small rubies. Then we could make a beautiful necklace for Her.”

The disagreement amongst the disciples carried on for so long that the brahmin felt that the Deities would never get Their ruby. But, he did not interfere. He wanted his students to learn how to manage the ashram themselves.

After a while he said, “That’s enough. Now each of you go to the woods. Bring back one stick, no more than an inch thick.”

The seven disciples stopped their quarreling and set out to obey their guru’s order. When they returned, the old brahmin took their sticks. He tied them all firmly together with a couple of lengths of rope. He then asked, “Which one of you can break this bundle?”

The seven young men each tried in turn, but even the strongest failed. “It’s not possible,” they exclaimed.

Watch, their guru said, cutting the rope with a knife. Taking each stick on its own, he very easily snapped it in two. “I am getting very old. Soon I will die. You are like a bundle of sticks. If you try to help each other, cooperate and work together, you will be strong and serve me well. But if you become divided and fight, you will become weak like these separate sticks. And then, who will care for our Radha and Krishna Deities?”

Realizing their folly, the seven disciples agreed to set the ruby in a gold ring. That ring, they decided, was to decorate one of Krishna’s fingers.

Their guru, pleased at this decision, finally felt ready to leave them. Soon after, he peacefully quit his body and returned to the spiritual world.

Later, when people came to see the old brahmin’s famous Deities they often asked, “How did Krishna get such a beautiful ring?” The disciples would always answer, “By the strength of a bundle of sticks.”