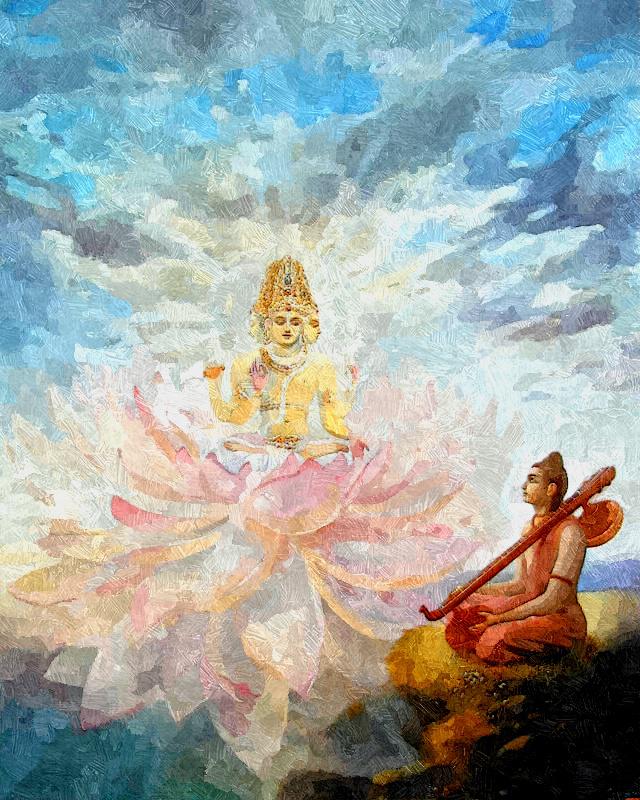 Q. I encountered a verse that seemingly contradicts a verse in the Bhagavad Gita. and I was wondering if you could help me to understand how to reconcile these two verses.

Srimad Bhagavatam (Canto 2, chapter 2, text 27)
“In that planet of Satyaloka, there is neither bereavement, nor old age nor death. There is no pain of any kind, and therefore there are no anxieties, save that sometimes, due to consciousness, there is a feeling of compassion for those unaware of the process of devotional service, who are subjected to unsurpassable miseries in the material world.”

Bhagavad Gita (Chapter 8, verse 16)
“From the highest planet in the material world down to the lowest, all are places of misery wherein repeated birth and death take place. But one who attains to My abode, O son of Kunti, never takes birth again.”

With the able assistance of one of my exalted godbrothers, I have a response that may “shed some light”, as you requested in your question.

This is a rather subtle subject matter. The conditions on Satyaloka are very amazing, and in some ways it seems like Vaikuntha. Srila Prabhupada says: “The demigods who reside with Lord Brahma in Satyaloka go to Vaikunthaloka in their present bodily constructions at the time of the dissolution.” (SB 7.3.21 ppt)

Srila Prabhupada says: “The Vedic literatures describe that in Satyaloka there is no birth, death, old age or disease. In other words, since Satyaloka is situated next to Brahmaloka, or the Brahman effulgence, it is almost as good as Vaikunthaloka. Lord Brahma’s abode is practically indescribable from our present status. Therefore it has been described as avan-manasa-gocara, or beyond the description of our words and the imagination of our minds. The Vedic literatures thus describe the abode of Lord Brahma: yad vai parardhyam tad uparamesthyam na yatra soko na jara na mrtyur nartir na codvegah. ‘In Satyaloka, which is situated many millions and billions of years away, there is no lamentation, nor is there old age, death, anxiety or the influence of enemies.'” (SB 5.1.21 ppt)

So it is almost as good as Vaikuntha, but still it is not as good. Even though it may be that, as described in SB 2.2.27: “In that planet of Satyaloka, there is neither bereavement, nor old age nor death. There is no pain of any kind, and therefore there are no anxieties, save that sometimes, due to consciousness, there is a feeling of compassion for those unaware of the process of devotional service, who are subjected to unsurpassable miseries in the material world.” Still this applies to those residents there who are the most elevated devotees, who are going to go back to Godhead at the end of the universe in their same bodies.

But not all of them go back to Godhead. Even Lord Brahma himself doesn’t always go back to Godhead. In the 9th canto Srila Prabhupada says: “Both the Lord and the living entity, being qualitatively spirit soul, have the tendency for peaceful enjoyment, but when the part of the Supreme Personality of Godhead unfortunately wants to enjoy independently, without Krsna, he is put into the material world, where he begins his life as Brahma and is gradually degraded to the status of an ant or a worm in stool.” (SB 9.24.58 ppt) So it appears we have all been Brahmas, but have fallen down.

Another explanation I have read, although I can’t find a reference right now, is that the lifetimes in Satyaloka are so long that there is no conception of there being death at the end of them, and therefore they are referred to as being eternal.

So I would say that somehow there has to be a balance between Srimad Bhagavatam 2.2.27andBhagavad Gita 8.16 and the numerous other statements that Srila Prabhupada and sastras make about Brahmaloka (Satyaloka) not being on the same level as Vaikuntha, but rather displaying the basic characteristics of the material world, at least slightly, and therefore not being as desirable as Vaikuntha.

As Srila Prabhupada says: “Beginning from Satyaloka, the topmost planet of the universe, situated just below the eternal Brahmaloka, as described above, all the planets are material. And one’s situation in any of the many material planets is still subject to the laws of material nature, namely birth, death, old age and disease.” (SB 2.5.41 ppt)