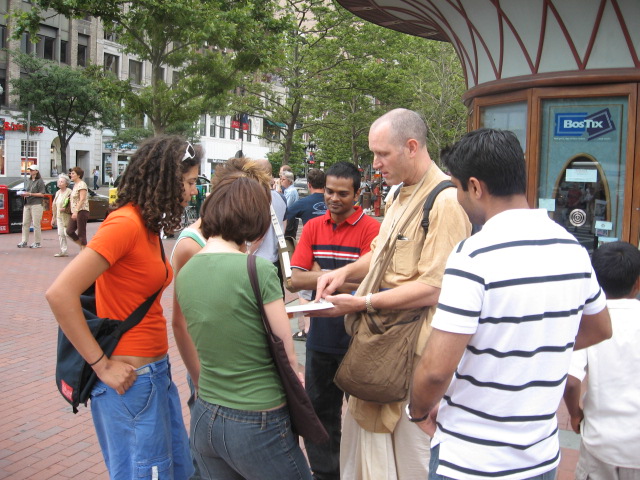 It was mid year marathon in Sydney city. I was distributing books outside a busy shopping mall with HG Yasodeva Prabhu. I was amazed that books were actually going out for a change. It was a strange crowd and I was throwing out every sankirtana line I knew. I saw a group of young islander girls. "Are you girls students, workers or dancers?" I said. They seemed too preoccupied to hear what I was saying but they somehow managed to catch the last line. "Oh my god, how did you know we were dancers?" they responded. (Apparently they were a dance troupe.) I had caught their attention and it was time to seal their fate. "I'm psychic" I replied. Now they were totally amazed. "Can you tell me what I am thinking right now?" the leader said. "A magician never does the same trick twice" I replied. I told them I was a monk and they were genuinely convinced I could read their minds. One even took a few paces back, almost as if to stay out of my reading radius. I decided Krsna was using his illusory potency to make these young girls interested in taking a book. I showed them a Perfection of Yoga because it looked genuinely mystical and the art work blew their minds (not that I could read that it blew their minds).They scrambled out some change and decided they would read one of these books. I then sent them on their way, even though some were still very persistently demanding me to tell them some of my monk mystic powers. Little did they know that I had done nothing and the Supersoul had simply told me what to say.
Your servant,
Madhavendra Puri Dasa.
Tags: book distribution, mind, sydney
E-mail me when people leave their comments –
Follow