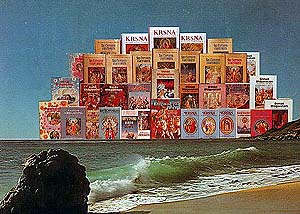 We were on traveling sankirtan in Vavuniya, the northern province of Sri Lanka, where until three years ago the civil war was raging. Although now the situation has calmed down, the police are still patrolling every corner. This place is famous because it's where most of the Tamil Tigers are imprisoned.

This part of Sri Lanka was cut off for many years from the rest of the island; therefore the Hare Krishna devotees are not very well known. Still, people in Sri Lanka naturally respect sadhus. On the buses and trains a special seat is reserved for sadhus: "Reserved for Clergy," reads the sign. That usually means Buddhist monks, but we also qualify. Therefore in book distribution the first thing they do is offer you a seat, and then after some time they say they have no money . For us coming from the West, where book distributors regularly get doors slammed in their face, the polite reception is a pleasant surprise.

This time we were going shop to shop in downtown Vavuniya, distributing in groups of three. We were attracting a lot of attention on the street. People would point and say, "Paringe! Vellai-karan Sami!" ("Look! There's a white swami!") When we entered the jewelry shops everyone fell silent. I would address the shop owner in Tamil, and then the customers would be even more surprised. They would offer us a seat, and we would explain that we were distributing genuine spiritual knowledge for the highest welfare of human society. Usually they would take a Bhagavad-gita, sometimes a Krsna book and a Ramayana also. And if they would give some silly excuse why they couldn't take a book, Bala Gaura Krishna Prabhu (a huge-bodied devotee from Chennai) would lean a little forward and, in a voice like a thunderbolt, say, "Sir, it is your duty to help!" Then they would immediately reply, "Oh, yes, yes, Swamiji, of course!" And we would all laugh together.

After some time we came across a small path leading behind a building. We followed the path and came to a courtyard of a big school. The kids were all exited to see us. We entered the vice principal's office, where a meeting was just breaking up. We apologized for the disturbance, but they said there was no problem and that they would like to see what we had. The vice principal decided to take the books for the school library. Because not all the teachers were there, he invited us to return the following morning and address the students for forty-five minutes and also show the books to the other teachers. We returned the next day, and a few hundred kids were waiting for us in the morning assembly. We gave a short class and got the kids to chant the Hare Krishna maha-mantra. They were very enthusiastic, but to get them even more fired up we said, "What's the matter? Didn't you eat enough today? Your voices are so weak." Then in their childish innocence they would chant at the top of their lungs. You can just imagine our bliss when we heard a hall full of kids chanting the maha-mantra for the first time in their lives as loudly as they could. At the end of the program Sri  Damodar Prabhu held a transcendental quiz, and when a child answered correctly he would give him or her a Tamil BTG as a gift.

Then the vice principal announced that all the teachers could come to his office to see our books. Many teachers came and took books. We also had a small debate on saiva-siddhanta, a controversial topic in Sri Lanka. Some of the teachers were on leave or didn't have money with them, so the principal suggested we keep a stock of books in his office and he would distribute them and collect the lakshmi for us. So the next day we visited the school again, for the third time. We prepared a pudding cake, put it on a big banana leaf, and cut pieces for all the teachers. They were happily surprised, for this was the first time anyone had brought krishna-prasadam to the school. They took twenty-two books, mostly Bhagavad-gitas, and said that whenever we were in town we had to visit their school.

This time we left through the main gate, not by the narrow path as on the first two days, and we saw a huge sign announcing the name of their school: "Christian Church Tamil Vidyalayam." We thought that if we had come to the
main gate on the first day, we might have skipped this school, thinking it was full of Christians. Fortunately, the mercy of Guru and Gauranga guided us through the side entrance.

Here in Sri Lanka there is great scope for book distribution. People are simple-hearted and very religious. Especially after the war and the tsunami, many are inquisitive about the meaning of life.

We are requesting devotees all over the world to please bless us that we can distribute many of Srila Prabhupada's books in Sri Lanka. Thank you.