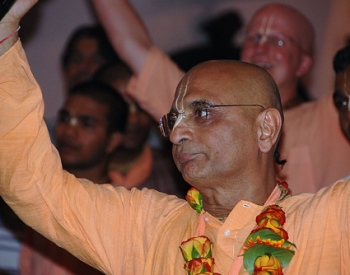 He became a member of the GBC in 1987 and served a term as chairman from 1989-1990. Bhakti Charu Swami’s GBC zonal assignments include Ujjain, Madhya Pradesh, India and is co-zonal secretary for Calcutta and Mayapur, West Bengal, and North Orissa and Puri.

Besides the significant energy Bhakti Charu Swami has spent on the development of the Mayapur project, the Hare Krishna movement’s world headquarters, he has headed the establishment and the continuing development of a large temple project in Ujjain, Gujarat, where he spends significant amounts of time. Under his direction, more than 20,000 school children in Ujjain receive a daily meal and the program is expected to expand further. Another major accomplishment of Bhakti Charu Swami is the production of an epic biographical video series, Abhay Charan. Over 100 episodes illustrate the life of Srila Prabhupada and have been televised in India and other parts of the world.

ISKCON members are known to appreciate Bhakti Charu Swami’s gentle ways and sweet singing of devotional songs and mantras. He assisted many devotees in understanding the etiquette of Gaudiya Vaishnavism as one of the original teachers at the Vrindavan Institute for Higher Education (VIHE) and continues to educate ISKCON’s members.