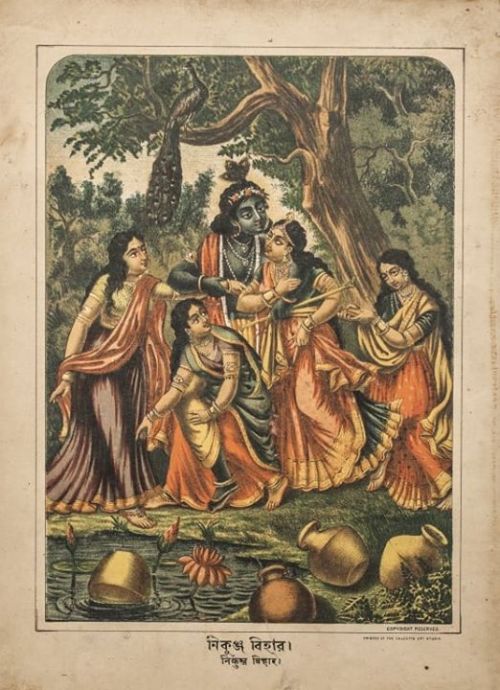 The bhakti tradition acknowledges the personal and impersonal aspects of the Absolute Truth, but values one of them as the more desirable of the two.

For hundreds of years, philosophers and theologians have debated whether God is ultimately personal or impersonal. After all, the nature of God plays a major role in our fate. If God is a person, then we have the potential for a loving, eternal relationship with Him. But if God isn’t a person and is instead impersonal, like a light we merge into, then we miss out on the opportunity for such a relationship.

“Learned transcendentalists who know the Absolute Truth call this nondual substance Brahman, Paramatma, or Bhagavan.” Brahman is the impersonal aspect of God. It’s like a white light that one can merge into if one so wishes. Paramatma is the localized aspect of God, also called the Supersoul. Readers of Ralph Waldo Emerson might be familiar with his idea of the Oversoul, similar to the idea of the Supersoul. As the Supersoul, God is in the heart of every living entity, witnessing and sanctioning the living entity’s actions. He also guides those willing to listen to Him, which can explain why people feel they have real experiences of God communicating with them from within.

Finally, there is Bhagavan, the personal aspect of God, which can be said to be His original feature. Though the Supersoul is personal, Bhagavan is the personal feature of God whom those who have realized the Bhagavan aspect of God can see face to face and interact with in an intimate way. Bhakti-yogis focus on Bhagavan because they can experience great ecstasy by participating in His pastimes, which God performs to give joy to His devotees.

With the impersonal feature there’s no love and affection. If we merge into God’s existence and lose our individuality, we cannot have a loving relationship with Him. It takes two people to have an intimate relationship, and the annihilation of our identity makes any relationship impossible.

When God Comes to This World
Periodically, God comes to this world to perform marvelous acts and pastimes. The bhakti texts are filled with stories of how God acts when He comes to this world in His personal feature. According to the bhakti tradition, God is not a deistic God. In deism, God creates the world but then distances Himself from it and chooses not to become involved with it. According to the bhakti tradition, however, God isn’t disconnected from our world but instead comes in various incarnations to please His devotees and attract us to Him by His different activities. He also fights evil, saves His devotees, and restores justice to the world.

When God comes to this world, He sometimes instructs us so that we can go to Him. When He came in His original form as Krishna, Arjuna asked Him, “Which are considered to be more perfect, those who are always properly engaged in Your devotional service or those who worship the impersonal Brahman, the unmanifested?” (Gita 12.1) Krishna replied, “Those who ﬁx their minds on My personal form and are always engaged in worshiping Me with great and transcendental faith are considered by Me to be most perfect.” (Gita 12.2) Thus Krishna dispels any doubts or fears we may have about pursuing the path of personalism.

God’s favorite thing to do when He comes to this world is to have loving relationships with His devotees. When Krishna is with His friends, He has sweet, loving exchanges with them. With His fellow cowherd boyfriends, He plays hide-and-seek, imitates the sounds of local animals, plays music, dances, eats, and does all sorts of other fun activities. God doesn’t want to just sit on a throne and judge people; He wants to have fun, and He wants us to join in.

Moreover, God even takes pleasure in serving His devotees. Arjuna had to fight a great battle, and out of affection for Arjuna, Krishna agreed to become his charioteer. As God, there was no need for Krishna to take that humble role. He could have finished off the entire army in the blink of an eye. But because Krishna has so much love for Arjuna, He decided to become Arjuna’s charioteer and render service to him.

The Benefits of Personalism
Still, despite the sweet nature of God’s personal aspect, the impersonal aspect can have its appeal. We may sometimes feel frustrated with material variety, so we conclude that variety of any sort leads to unhappiness and that the way to true happiness is by stopping all activity. Thus we may conclude that the ultimate happiness is to merge into God’s impersonal feature. But does this sound like real happiness?

Imagine you had to stop all your activities and just sit in a room doing nothing. Would you be happy? Probably not. You’d be much happier being with someone you love. A person on the path of impersonalism may be able to escape suffering, but he or she misses out on the opportunity to feel a greater sense of happiness by experiencing a loving relationship with God. Personalism gives us the opportunity to share our joy with God and His devotees. In contrast, impersonalism is like solitary confinement.

In the Bhagavad-gita (2.62) Krishna explains why material activities frustrate us,

dhyayato vishayan pumsah
sangas teshupajayate
sangat sanjayate kamah
kamat krodho ‘bhijayate
“While contemplating the objects of the senses, a person develops attachment for them, and from such attachment lust develops, and from lust anger arises.” When we perform material activities, we feel frustrated when we don’t get what we desire. Or if we get what we desire but it doesn’t match our expectations, then we may also feel frustrated. It’s just like when a young boy sees an ice cream cone. He starts to desire it more and more, but if his mother says he can’t have it, he gets frustrated. But if he were to get the ice cream and it wasn’t as good as he thought it would be, he would still be frustrated. Ultimately, he’ll feel frustrated even if the ice cream meets or exceeded his expectations, because bodily pleasure alone can’t satisfy the soul.

When we act to please God and not ourselves, we don’t experience unfulfilled lust. In fact, when we act for God’s pleasure, we feel a greater joy than if we had tried to act for our own sake. On the other hand, we feel less and less happiness from material activities. Take ice cream as an example again. It tastes really good, but after a certain point you get sick of it. Spiritual activities are different. The more you perform them, the better they taste.

The Lord’s Reciprocation
Another great thing about personalism is that the Lord reciprocates our love for Him and loves us to an infinite degree. We are all searching for love, and God can completely fulfill our desire to love and be loved. An exchange between Chaitanya Mahaprabhu, who is Krishna Himself, and His devotee Sanatana Goswami illustrates how much God loves us. Sanatana Goswami was once suffering from itching, oozing sores all over his body. But Lord Chaitanya had so much love for His devotee that He embraced him, and Sanatana Goswami was cured of his condition.

This incident highlights some of the wonderful qualities of the Lord. He loves us unconditionally, despite our imperfections or blemishes. Our boyfriends, girlfriends, friends, pets, and so on could leave us at any moment. Yet even in our darkest hours we can count on Krishna to be there for us, ready to embrace us. Moreover, the Lord can also preserve whatever we have and carry to us what we lack. Thus by taking shelter of God we can overcome any difficulties we may face.

Another story involving Lord Chaitanya portrays God’s love for His devotees. When the great devotee Haridasa Thakura died, Lord Chaitanya carried his body to the sea, bathed it, performed the funeral ceremony, and covered his body in the tomb with sand. Being God, He didn’t have to do any of this; He could have gotten someone else to do it. But out of love and affection for His devotee, He did this service for Haridasa Thakura.

The Bliss of Bhakti-yoga
Moreover, the whole process of bhakti-yoga is very blissful. We can get a hint of how blissful bhakti-yoga is through the story of Dhruva. Dhruva was a child whose father was a king with two wives. Unfortunately for Dhruva, his mother was the king’s less-favored wife. One day when Dhruva tried to sit on his father’s lap, his stepmother stopped him. She told Dhruva that if he wanted to sit on his father’s lap, he would have to worship God and take birth from her womb.

Disappointed, Dhruva told his mother what had happened. She tried to console him, and she too said that worshiping the Lord would be the only way he could sit on his father’s lap. So Dhruva set out for the forest to worship the Lord, not only to be able to sit on his father’s lap, but also to gain a kingdom far, far greater than his father’s. Along the way Dhruva met the sage Narada, who gave him a mantra to meditate on. By chanting this mantra, Dhruva eventually saw God face to face.

After seeing God (Krishna in His Vishnu form), Dhruva was ecstatic. He felt such intense bliss that he condemned himself for approaching God for material benefits. He considered the bliss of seeing God far greater than any material opulence. He said that he set out to find some broken glass and instead found a diamond. Therefore, even though we may derive great joy from material opulence, the joy of love of God makes such happiness seem as insignificant as broken glass.

Such intense bliss is available to us through the practice of bhakti-yoga, beginning with hearing and chanting God’s names, as in the maha-mantra: Hare Krishna, Hare Krishna, Krishna Krishna, Hare Hare/ Hare Rama, Hare Rama, Rama Rama, Hare Hare. Chanting this mantra revives the dormant love for God that lies within us. Thus, by approaching the personal aspect of God, we can feel increasing levels of bliss and experience the love we are all searching for.