In and around Quanzhou, a bustling industrial city, there are shrines that historians believe may have been part of a network of more than a dozen Hindu temples and shrines 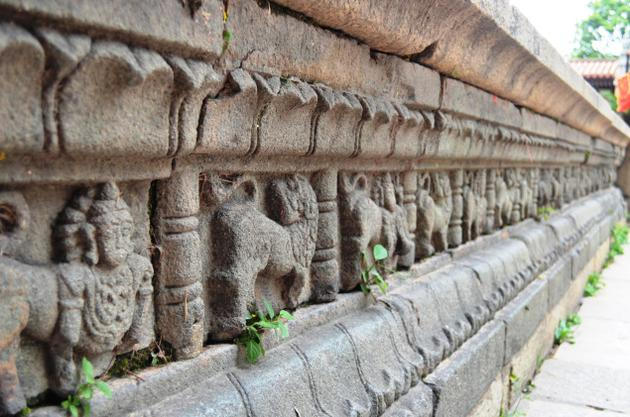 A panel of inscriptions of the God Narasimha adorns the entrance to the main shrine of the temple, believed to have been installed by Tamil traders who lived in Quanzhou in the 13th century. Photo: Ananth Krishnan

For the residents of Chedian, a few thousand-year-old village of muddy by-lanes and old stone courtyard houses, she is just another form of Guanyin, the female Bodhisattva who is venerated in many parts of China.

But the goddess that the residents of this village pray to every morning, as they light incense sticks and chant prayers, is quite unlike any deity one might find elsewhere in China. Sitting cross-legged, the four-armed goddess smiles benignly, flanked by two attendants, with an apparently vanquished demon lying at her feet.

Local scholars are still unsure about her identity, but what they do know is that this shrine’s unique roots lie not in China, but in far away south India. The deity, they say, was either brought to Quanzhou — a thriving port city that was at the centre of the region’s maritime commerce a few centuries ago — by Tamil traders who worked here some 800 years ago, or perhaps more likely, crafted by local sculptors at their behest.

“This is possibly the only temple in China where we are still praying to a Hindu God,” says Li San Long, a Chedian resident, with a smile.

“Even though most of the villagers still think she is Guanyin!” Mr. Li said the village temple collapsed some 500 years ago, but villagers dug through the rubble, saved the deity and rebuilt the temple, believing that the goddess brought them good fortune — a belief that some, at least, still adhere to.

The Chedian shrine is just one of what historians believe may have been a network of more than a dozen Hindu temples or shrines, including two grand big temples, built in Quanzhou and surrounding villages by a community of Tamil traders who lived here during the Song (960-1279) and Yuan (1279-1368) dynasties.

At the time, this port city was among the busiest in the world and was a thriving centre of regional maritime commerce.

The history of Quanzhou’s temples and Tamil links was largely forgotten until the 1930s, when dozens of stones showing perfectly rendered images of the god Narasimha — the man-lion avatar of Vishnu — were unearthed by a Quanzhou archaeologist called Wu Wenliang. Elephant statues and images narrating mythological stories related to Vishnu and Shiva were also found, bearing a style and pattern that was almost identical to what was evident in the temples of Tamil Nadu and Andhra Pradesh from a similar period.

Wu’s discoveries received little attention at the time as his country was slowly emerging from the turmoil of the Japanese occupation, the Second World War and the civil war. It took more than a decade after the Communists came to power in 1949 for the stones and statues to even be placed in a museum, known today as the Quanzhou Maritime Museum.

“It is difficult to say how many temples there were, and how many were destroyed or fell to ruin,” the museum’s vice curator Wang Liming told The Hindu. “But we have found them spread across so many different sites that we are very possibly talking about many temples that were built across Quanzhou.”

Today, most of the sculptures and statues are on display in the museum, which also showcases a map that leaves little doubt about the remarkable spread of the discoveries. The sites stretch across more than a dozen locations located all over the city and in the surrounding county. The most recent discoveries were made in the 1980s, and it is possible, says Ms. Wang, that there are old sites yet to be discovered.

The Maritime Museum has now opened a special exhibit showcasing Quanzhou’s south Indian links. Ms. Wang says there is a renewed interest — and financial backing — from the local government to do more to showcase what she describes as the city’s “1000-year-old history with south India,” which has been largely forgotten, not only in China but also in India.

“There is still a lot we don’t know about this period,” she says, “so if we can get any help from Indian scholars, we would really welcome it as this is something we need to study together. Most of the stones come from the 13th century Yuan Dynasty, which developed close trade links with the kingdoms of southern India. We believe that the designs were brought by the traders, but the work was probably done by Chinese workers.”

Ms. Wang says the earliest record of an Indian residing in Quanzhou dates back to the 6th century. An inscription found on the Yanfu temple from the Song Dynasty describes how the monk Gunaratna, known in China as Liang Putong, translated sutras from Sanskrit. Trade particularly flourished in the 13th century Yuan Dynasty. In 1271, a visiting Italian merchant recorded that the Indian traders “were recognised easily.”

“These rich Indian men and women mainly live on vegetables, milk and rice,” he wrote, unlike the Chinese “who eat meat and fish.” The most striking legacy of this period of history is still on public display in a hidden corner of the 7th century Kaiyuan Buddhist Temple, which is today Quanzhou’s biggest temple and is located in the centre of the old town. A popular attraction for Chinese Buddhists, the temple receives a few thousand visitors every day. In a corner behind the temple, there are at least half a dozen pillars displaying an extraordinary variety of inscriptions from Hindu mythology. A panel of inscriptions depicting the god Narasimha also adorns the steps leading up to the main shrine, which houses a Buddha statue. Huang Yishan, a temple caretaker whose family has, for generations, owned the land on which the temple was built, says the inscriptions are perhaps the most unique part of the temple, although he laments that most of his compatriots are unaware of this chapter of history. On a recent afternoon, as a stream of visitors walked up the steps to offer incense sticks as they prayed to Buddha, none spared a glance at the panel of inscriptions. Other indicators from Quanzhou’s rich but forgotten past lie scattered through what is now a modern and bustling industrial city, albeit a town that today lies in the shadow of the provincial capital Xiamen and the more prosperous port city of Guangzhou to the far south.

A few kilometres from the Kaiyuan temple stands a striking several metre-high Shiva lingam in the centre of the popular Bamboo Stone Park. To the city’s residents, however, the lingam is merely known as a rather unusually shaped “bamboo stone,” another symbol of history that still stays hidden in plain sight.