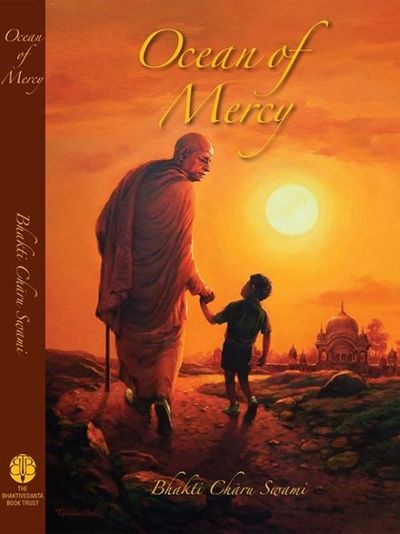 “Ocean of Mercy: A Search Fulfilled” is His Holiness Bhakti Charu Swami’s memoir of his childhood and youth in India, his travels in Europe, his search for a guru back in India, his joining the Krsna consciousness movement in July of 1976, and his intimate service to Srila Prabhupada from then till Prabhupada’s departure in November of 1977. In honor of Bhakti Charu Swami and his greatly inspiring life of devotional service, the Bhaktivedanta Book Trust is making this book available in pdf format as a free download. Simply copy the following link into your browser and hit “enter.”

Because of all the included illustrations, it's a rather large file (over 50 megabytes) and may not appear on your screen right away; simply swing your mouse pointer over to the upper right-hand corner of your screen and hit the download button.

What follows is His Holiness Radhanatha Swami's Foreword to “Ocean of Mercy.”

"Ocean of Mercy" is a unique memoir. We are given entrance into a fascinating story of tragedy, adventure, and grace through the eyes of His Holiness Bhakti Charu Swami. It begins with a young Indian boy from Calcutta whose loving mother is stricken with a contagious disease and soon passes away when the boy most craved her love and care. Almost immediately after her passing, his family fell from grand riches into poverty.

Just after his basic education, he abandoned his home, seeking adventure and friendship. He yearned to embrace the alluring promises of the Western world, leaving behind what he considered the backward, Third World society of India. While traveling over land and sea to Europe, he discovered everything he longed for and more.

But at the peak of his euphoria, something happened. While he was in Germany, one of his new-found American friends insulted India, condemning its poverty, disease, and social atrophy. For the first time in his life, the boy felt love for the country of his birth and feebly tried to defend the dignity of India. He realized how little he knew. It was then that he first experienced a burning hunger to understand the spiritual and cultural riches of his birthplace. After delving into book after book, he decided to leave the West behind and return to India as a sadhu—a wandering spiritual monk in the Himalayas.

While on his pilgrimage for truth, he came to the Krsna consciousness movement. At that time there were thousands of devotees in the movement who had given their whole lives to serve their guru, His Divine Grace A.C. Bhaktivedanta Swami Prabhupada. Each of them would give anything for even a moment of their beloved guru’s association. A couple of months after joining, the author personally met Srila Prabhupada, who showered him with affection.

Upon their first meeting, Srila Prabhupada requested him to translate all his books into Bengali, the native language of the movement’s spiritual heritage, as well as Srila Prabhupada’s own mother tongue. A few weeks later he was given the service of assisting Srila Prabhupada in all Bengali and Hindi correspondence, and he became Prabhupada’s personal secretary for all of India.

Srila Prabhupada loved and trusted him. Within the first few months of his practicing bhakti, loving devotional service to Lord Sri Krsna, he became Prabhupada’s personal assistant and cook and remained among the three or four disciples who made up Prabhupada’s personal entourage. In those few months he was awarded harinama initiation, Gayatri diksa, and initiation into the renounced order of sannyasa. What makes this so special is that all three initiations were given to only a few senior leaders, and then only after many years of sacrifice.

In "Ocean of Mercy" we are transported into the intimate pastimes of Srila Prabhupada as he preached to the masses, guided individuals, and responded to various challenges as a powerful world acarya, spiritual exemplar and teacher. Yet we are also shown how Srila Prabhupada would reveal his love as a tender-hearted, humble spiritual father and friend. Bhakti Charu Swami takes us by the hand and brings us into Srila Prabhupada’s private quarters and at times to his bedside during the final year of his physical presence. In doing so, through his own devoted eyes the Swami gives us entrance into what only few have seen. As I read this book I was astonished and enlightened. I laughed and I cried as I was carried into the personal presence of Srila Prabhupada through this beautiful gift of his loving servant.