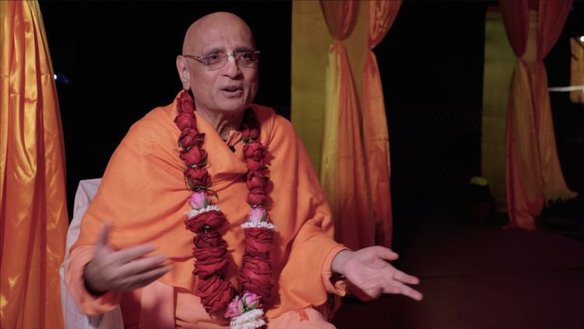 A new 37-minute documentary entitled “Seeking Shelter: The Life & Legacy of Bhakti Charu Swami” is set to premiere on ISKCON News and Youtube on July 24th, as part of the global celebration on the beloved ISKCON guru’s disappearance day.

“The pandemic has claimed millions of lives — ordinary humans, celebrities and saintly people alike — leaving loved ones grappling with the tragic loss and burning existential questions such as ‘Why do bad things happen to good people?’ and ‘Where do we find shelter from the tragedies of human life?’” reads the film’s official summary. “Among the lost treasures is the world-renowned spiritual teacher Bhakti Charu Swami from Bengal, India, who passed away due to complications from Covid-19 on July 4th, 2020, in Orlando, Florida, at the age of 74. This documentary captures his major life events and achievements while providing a glimpse into his inner journey seeking ultimate shelter (‘saranagati’), through his own words, music and art.”

The film is written and directed by Krisztina Danka, Ph.D. (Krishna Lila Dasi) - a multi-award-winning filmmaker of documentaries like The Joy of Devotion, The Stolen River and Nature’s IQ. The Director of Photography is Filip Cargonja (Gaura Govinda Das), who has worked with Krishna Lila on many previous films. Seeking Shelter is also executive produced by Rishi Singh (Rasabihari Krishna Das), and produced by Sharon Hamilton-Getz (Saranagati Dasi), a disciple of Bhakti Charu Swami who works for several United Nations NGOs.