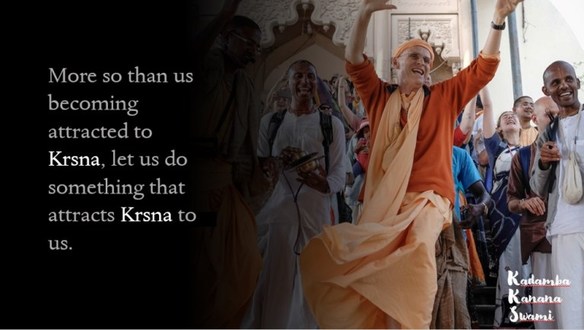 More so than us becoming attracted to Krsna, let us do something that attracts Krsna to us!

Devotional service is about attracting Krsna. It is not just about us getting attracted to Krsna. In the beginning, we think that devotional service is about us becoming attracted to Krsna but we can think of Srila Bhaktisiddhanta Saraswati Thakur, who was standing a bit off to the side for the darshan in the temple of Sri Sri Gandharvika Giridhari in his head headquarters in Mayapur. He did not actually get a good darshan of the deity. So one devotee said, “Oh, you are not getting good darshan of the deity.” But his mood was, “It is actually about the deity seeing me. It is about Sri Krsna akarshini – Sri Krsna becoming attracted.”

More so than us becoming attracted to Krsna, let us do something that attracts Krsna to us. Just like when someone mentions, “When I am doing certain types of services, I feel really connected to Krsna”. Okay, that is nice, certainly very good. But when Krsna wants to connect with us, that is just another thing. When Krsna becomes attracted to us for the service we have done, that is greater! Just like Gurudas, when he was in involved in the construction of the Krsna Balaram Mandir in Vrndavana, he complained to Srila Prabhupada that he had no time to think about Krsna. Prabhupada’s reply was, “Do you think when Arjuna was on the battlefield of Kurukshetra, he was thinking about Krsna?” No, Arjuna was just thinking about how to fight. How to fight next? Weapons were flying in from all sides, and Arjuna had to block all of them. He was in total alertness. There was no question of thinking about anything else. So this spirit of sacrifice is a higher spirit. The spirit of doing something that is so dear to Krsna, that it will certainly attract Krsna. That is the most wonderful thing.