Exactly 365 days ago there were nearly 10 Devotees in whole Mysore who used regularly chant the Holy Names and attend the Sunday Programs. Even among them only 5 were real residents, others were comers.

Disciples of His Holiness Jayapataka Swami Maharaja His Grace Ananda Dham Prabhu (from Mumbai) and his good wife Vijayakamala Mataji (from Madurai) settled in a rented room in Mysore, just to organize here preaching programs. With the financial help of other Devotees they rented a half house as a ISKCON registered Temple. Devotees installed Deities of Sri Sri Goura Nitay and take care of Them.

There are also other Devotees who a from other cities. Who do their jobs and schoolings here in Mysore. Other times they also fully engaged with book distribution, Deity worship etc.

One day for me also was given chance to distribute books. It was my first time. I thought I will enjoy doing that, thought that everyone will buy Srila Prabhupada's books. They are so interesting, with pictures…It was Ekadashi, sunny day. As usually Indian people adore to visit Temples on weekends and take darshan of different Deities of the Lord or Demigods. We also knowing that, hoped to see crowd of people at the Balaji Temple and all our books, needed staffs there.

We made a small shop on the table. Some Prabhus stood over the table and started to distribute books. But with Vijayakamala Mataji we were asked to stand in front of the out door and distribute books there.

By the time lots of people started to come to the Temple. They used to stand in the long line for hours and hours, just to see the Lord. Some of them had half broken coconuts, lemons. Some of them had garlands made of Tulasi leaves.

At the outdoor Temple pujari used to offer a plate of Prasadam to those guests. That door was tight enough, because of that filled with crowd. After standing in lines for several hours, afterwards this crowd made people tired. They did not even have strength to look to our books.

Sun was scorching with heat, books were getting heavier and heavier, stomach started to beg for food, but we were determinate to distribute even only a book.

3-4 hours past. My smile became dry, as if I was forcing my face muscles to smile and create friendly contact with others. Energy was gone. Back could not stand straight anymore and shoulders began to refuse to hold my head…

Sun set, lights turned on, but for our fortune people were coming and going still.

I thought not to beg but to force people to take the mercy of the Lord Gouranga. Now for the this time took only 5-10 small books and stood right before the comers.

-You should take this book! And your life will be changed!

Unfortunately, most of population did not understand English. Some of them joined their five fingers and touched their mouth saying to me that they do not have money for food, how they can buy these books.

-Oh, dear Krishna! Please, do something!

People were going, I used to stop them and give book to their hands and with enthusiasm forced them to take.

Oh my God! Some more people took!!! Yes! It works!

Then again pause for several minutes.

I thought these people are tired of so called religions, swamijis. There are so many of such like organizations. Some of them were victims of pseudo religions, pseudo gods…HOW DIFFICULT NOW TO BRING THEM TO THE REAL PATH??? I understood that here in India to preach is far enough tuft comparatively to other countries.

To teach the taught one is far more difficult than that one who does not know anything.

Sometimes I just wanted to catch from the collar of some of them and say:

-Hey, rascal! You spend money for tobaccos. Why not to take this mercy and change your life?

-Hey, rascal! You have money for buying a pure Mysore silk sari, so why not to take this and to become free from all sufferings? …

Despite to these difficulties, these Devotees not loosing their hope, patiently preached everyday. Some distributed books till late nights. His Grace Ananda Dham Prabhu used to give classes on Bhagavatam and his wife used to cook for Deities, Devotees and guests.

Within a year, more than 20 new Devotees joined Krishna Consciousness. They started to chant the Holy Names in beads. They became pure vegetarians, started to observe Ekadashi and to regularly attend the classes. Among them most of them were from Enforces Organization.

For Janmashtami Devotees rented a big hall and kitchen in one old Temple. Some of us were busy with cooking, making garlands and some of us decorating the Temple in order to welcome guests of Krishna. Matajis were busy with cooking for more than 1000 people: cutting fruits, vegetables, braking jaggery, washing huge amount of rice. All the Devotees including new comers fasted till midnight in order to use their all 24 hours in the service of Krishna and His guests.

The festival began! Guests started to come and listen the Kirtans, take darshan of Deities, even to do Abhishek.

1000 plates which we had had all used and gone!

What to do? Prasad was finished! 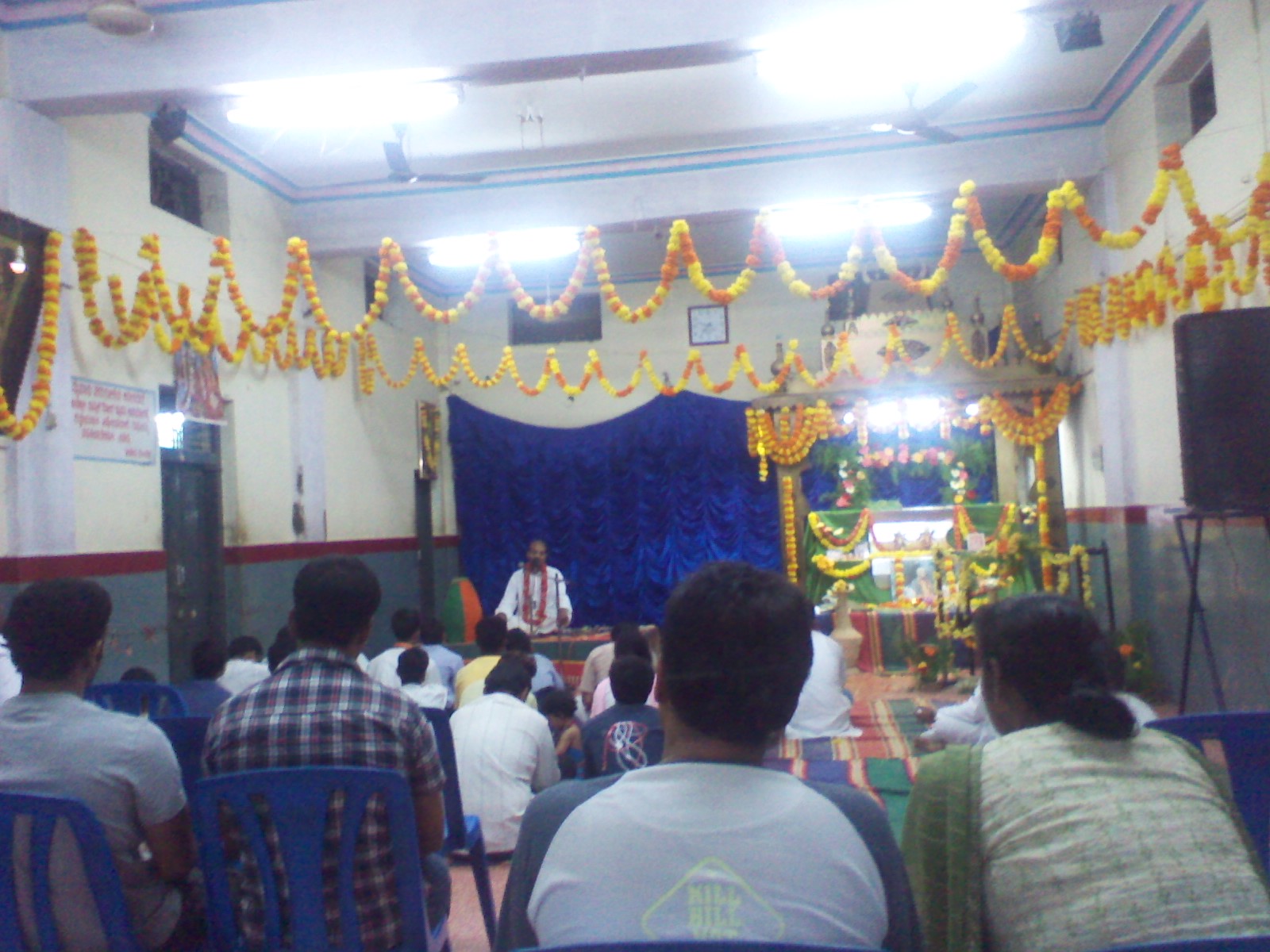 But guests' comings and goings continued till midnight.

Immediately prabhujis brought again 1000 plates, along with items for re cooking. Matajis, firmly tied their belt and marched to cook again.

At the end we had wonderful Kirtan, where everybody loudly chanted and danced.

AT LEAST KRISHNA APPEARED IN MYSORE! Each visitor were given chance to swing Gopal.

This event finished with taking Ekadashi Prasadam. After that guests had gone. But Devotees stayed for other 2-3 hours for cleaning the rented Temple and giving back the key to the owner.

Now Mysore Devotees pray and hope that one day they will have opportunity to build a house for Sri Sri Radha Krishna and invite Them to stay there for accepting their love and devotion!

All glories to the Holy Names!!!