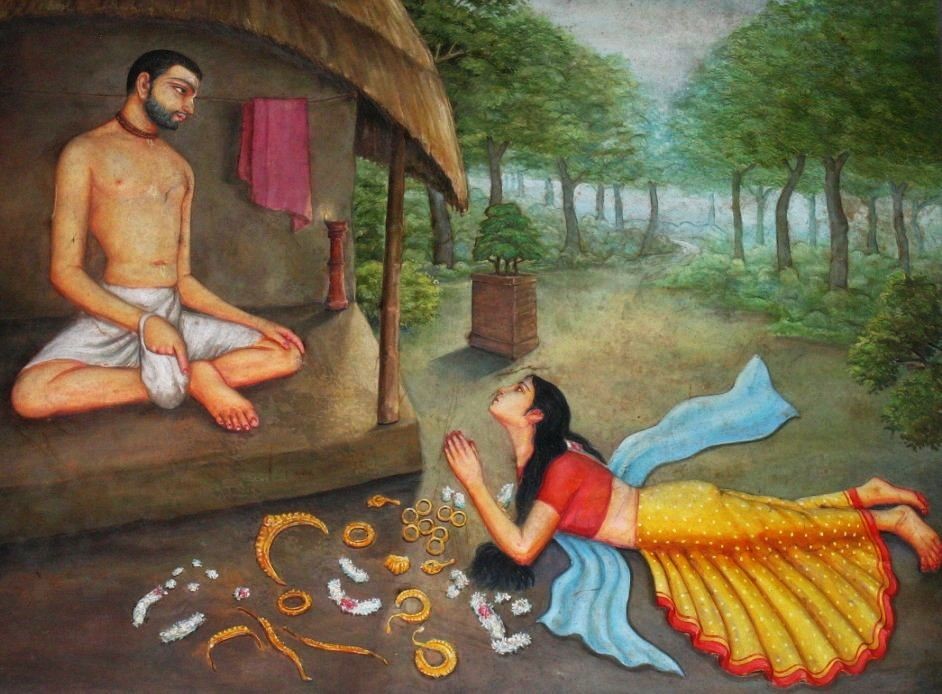 Kama (Cupid) possesses five arrows, with which he inflicts all conditioned living entities. According to Sripad Prabodhananda Saraswati (in his commentary on the Gita Govinda), these arrows are: infatuation, agitation, heart-burning, extreme dryness and destruction. Let us elaborate:

During the course of one’s life, one sees many members of the opposite sex. There is a natural attraction caused by the arrangement of Maya because we identify ourselves with the body (pumsah-striya-maithuni bhava). It produces passionate heat in our bodies, which in turn, unleashes the material desires stored within our hearts since time immemorial and also provides the drive to achieve them. Thus, the hrdaya granthi (material entanglement) is tightened and we continue to undergo life-times of transmigration within various species.

Although there is natural attraction between sexes in the material world, the conditioned souls (especially human beings) do not chase after the first visible object of enjoyment. Due to previous conditioning or samskara, the mind had recorded certain enjoyable traits like beauty, education, wealth, fame, morality, etc. and favourable methods for association. When one finds prima facie some of these traits in a person and the opportunity to engage in association, Kama releases his arrows:

The first arrow makes one infatuated. One identifies only the best qualities in the other person. One constantly thinks of the other and if the opportunity permits, they talk with or meet each other. In this way, the infatuation is deepened.

When the next arrow pierces the heart, separation becomes unbearable. One’s mind and senses are agitated. If opportunity permits, the couple increase their interaction until it covers the entire day. They derive mellow from each other’s association: nectar to start with; then follow other things like children, household responsibilities, etc.

But such state does not last for long, as the third arrow pierces the heart which begins to burn. The pain is almost intolerable. One’s intelligence gets bewildered and one acts like a madman. Often, the relationships enter problematic phase with frequent frictions producing more heat.

Finally, Kama releases the fifth arrow, which just destroys the victim: suicide, acid-throwing, murder, etc. Death separates even the most intimate couples. In this way, one suffers in this life and the next (entering into ghostly species).

All the five arrows are meant to increase the intensity of material entanglement and
degrade one into the darkest pits of illusion. Two options are normally available for the conditioned souls:

1.Bhoga: Some philosophers like Daksa Prajapati say that one must continue to enjoy the material objects according to religious principles until one gets totally burnt out. The nature of passionate energy is that initially, it appears like nectar, but later becomes poison. Therefore, when the nectar turns into poison, it is the appropriate time to engage in yoga (union with the spiritual energy). However, these karma-mimamsikas ignore the fact that after performing yoga for some time, the senses again becomes active, ready to derive nectar from material objects. In fact, by engagement in material gratification, the samskara (passionate energy driving our desires and repeated transmigration) is only deepened. Such bhogi-yogis soon fall down to perverted material enjoyment and enter hellish planets.

2.Tyaga: Other philosophers like Astavakra say that one must completely renounce material objects and engage in yoga because the material nature is a falsity. The perception of nectar or poison from material objects is due to illusion of the existence of these objects and one’s separate ego. Through proper knowledge, one can transcend the passionate energy and set oneself free from repeated birth and death. However, these jnana-mimamsikas forget that even when one renounces the material objects, the stored desires remain, to be evacuated in different ways when opportunities are provided by Maya. The hrdaya granthi is too tight to be untied by cultivation of imaginary knowledge and passive renunciation. Such tyagi-yogis fall down due to dryness of the senses and take birth among species with dormant consciousness like plants.

Due to the mercy of Krishna (God) and His representatives, we have access to an alternative, viz., engagement in devotional service. Srila Rupa Goswami notes:

The material nature is neither an object of our enjoyment nor it is a falsity. It is a reality meant for the enjoyment of the Master of the senses and the sense-objects, Krishna. Similarly, our ego is neither an independent product of the material nature nor a falsity, but a separated part of Krishna’s ego. Therefore, it needs to be purified of all material designations (identification of one’s body as the self for material enjoyment) and then engaged in the service of Krishna (the constitutional position of our ego) through purified senses. Indeed, the desires for bhoga-tyaga are detrimental to cultivation of favourable devotional service and can be identified as deviations from the right path.

In devotional service, since the senses and objects of senses are engaged in the service of Krishna, no samskara for material enjoyment is produced. However, the senses do not remain dry due to direct association with Krishna, the reservoir of all mellows. The work according to religious principles is performed for satisfaction of Krishna (not for one’s own ego). So, it liberates the ego from repeated transmigration. The cultivation of knowledge is based on factual position that one’s ego is an eternal
servant of Krishna (not that everything that exists is false) and the renunciation is based on the active principle of service. Hence, there is no fall down to material designations (unless one commits offenses and Krishna withdraws His mercy).

The complete victory of the devotional process over Kama was demonstrated by Thakur Haridas, when he was approached by a beautiful prostitute at midnight in a secluded place. Due to his attachment to the chanting of the Holy Names of Krishna, he not only resisted the attempts by the lady to enjoy with him but also transformed her into a pure devotee.

Tags: arrows of kama
E-mail me when people leave their comments –
Follow