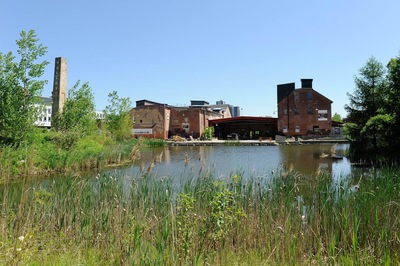 The place was the Weston Family Quarry Garden at the Evergreen Brickworks where two young boys were fishing for gold or catfish, whatever would go for the bait.
“What have you got there?  Worms?”  I asked.
“No, bread.  We already caught 3 catfish but we threw them back in the pond.  That’s what you’re supposed to do.”
I asked the boys if they would allow me to film them.  They declined but still we consider each other friends.
“They (meaning the fish) are really enthusiastic (for the bread),” I observed.  “Eating, sleeping, mating and defending.  That’s what goes on in this world.”  Sanjit was laughing in the background.  The two boys were having a bit of a disagreement.  Sanjit and Niami, my companions, bade farewell to the fishermen as we carried on with our trek through the park and the trail.
Four functions that I mentioned are common among all species.  This is sastric, or from the books of wisdom.  Ahara—eating.  Nidra—sleeping.  Bhaya—defense.  Maituni—mating.  That sums it up.
My mind, however, would doubt this summary.  I sometimes question what happened to a possible fifth?  What about play, recreation, sport?  I don’t doubt scripture but have a mild question about it.  Having been raised on the farm I’ve seen all our barnyard buddies have their fun together.  I do have an answer which I will reserve.  I thought it might be nice to hear from readers their take on this apparent riddle.  Please get back to me on your deliberation.
Source: http://thewalkingmonk.blogspot.com/2020/05/sunday-may-24-2020.html
Tags: bhaktimarga swami, blogs, blogger, the walking monk
E-mail me when people leave their comments –
Follow