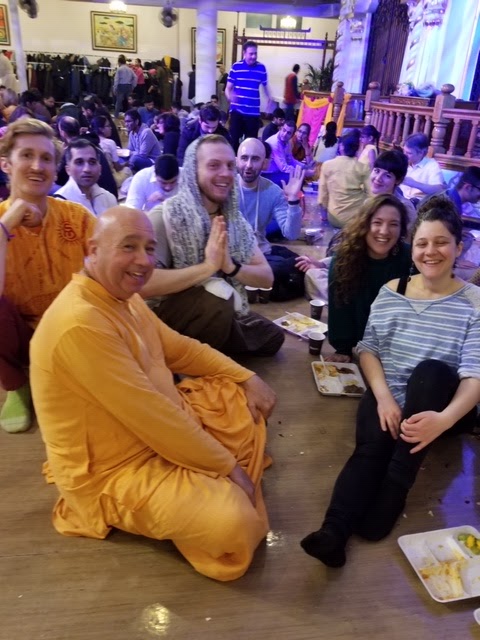 Sunday is that day of the week for spending hours with community.  It started off for me at the ISKCON Brampton Centre with everyone singing in unison, and also as far as possible, physically moving together, as in dance.
I spoke from Chapter 2.46 of the Gita where there is mention of Sri Chaitanya (in the purport) displaying ecstasies.  The greatest contribution of this great monk, who walked plenty, was leaving Himself in the form of kirtan—the sacred name.  It is the practice of sharing sacred sound that becomes the avatar of the age.  We live in an age of darkness, the kali yuga, where self-centredness prevails.  There is a need to heal ourselves from the negative effects.  Kirtan is the sure cure.
I found myself at my homebase after Brampton.  I participated in a Ratha Yatra meeting.  The group is preparing big for this Summer’s chariot festival.  They wanted to kick-start the event with, once again, kirtan.  Together, we sang bhajans praising the qualities of Chaitanya.  For that, we referred to those of Bhaktivinoda Thakura, which are actually lovely.  I was asked to lead and was surprised at the lung power that Krishna was providing me.
All it takes for me to project my voice is to have great musical accompaniment.  Abhay was on the mrdunga drum and did fabulously.
Then it came time to speak to this crowd and from that came Chapter 2.46 about Chaitanya and His chanting.  He was born in 1486.  He held private parties—of a spiritual type—and then became public as communities became comfortable with His unique approach to life.
Source: http://thewalkingmonk.blogspot.com/2020/03/sunday-march-8th-2020.html
Tags: bhaktimarga swami, blogs, blogger, the walking monk
E-mail me when people leave their comments –
Follow