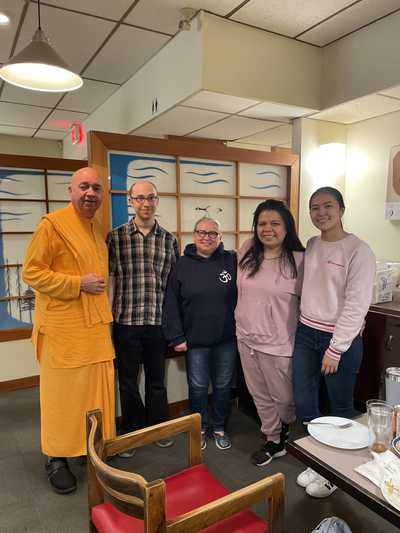 Rain is prevalent these days, but somehow or other the presiding God of all Gods seems to make way for some walking to take place. Thank you, Krishna. The water from above appears to get tossed around intermittently. It’s not a solid downpour. I understand, though, that Manitoba farmers are unhappy about the collective wetness.

During some rain, I had the pleasure to get interviewed indoors by R. Jamnu Radio, with host Apna, at 10 am. Initially it was going to be a twenty-minute talk, then it was stretched to thirty minutes. The questions and subsequent answers were compelling enough that our conversation went on for an hour.

The questions (at least some) were: How did you go from being a Catholic to becoming a devotee of Krishna? How did ISKCON come into being? Tell us about your walking and your book, “The Saffron Path.” How do you deal with negativity and a world so materialistic?

Apna began with some history, my history, but she eventually ended up delving deeper into philosophy. It was good.

I also made home visits and in between delivered Zoom classes from our very precious literatures, Bhagavad-gita and Bhagavatam. One stop was at Affinity Restaurant, downtown. I do not frequent restaurants as a habit, but when someone invites, and it’s a plant-based food outlet, I will accept. This Buddhist business became our venue for meeting friends and supporters of our community. The food was good and healthy, and the company was sweetly Vaishnava.