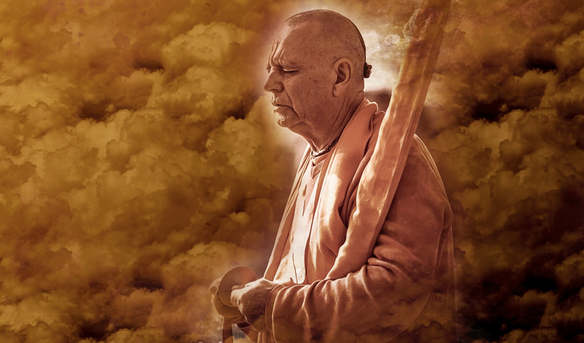 Karma means action or any action that brings a reaction that binds us to the material world. Although the idea of karma is generally associated with Eastern philosophy, many people in the West are also coming to understand that karma is a natural principle, like time or gravity, and no less inescapable. For every action there is a reaction. If we cause pain and suffering to other living beings, we must endure pain and suffering in return, both individually and collectively.
We reap what we sow, in this life and the next, for nature has her own justice. No one can escape the law of karma, except those who understand how it works.
To understand how karma can cause war, for example, let's take an illustration from the Vedas. Sometimes a fire starts in a bamboo forest when the trees rub together. The real cause of the fire is not the trees but the wind that moves them. The trees are only the instruments. In the same way two nations are not the real causes of the friction that may exist between them. The real cause is the karma generated by the world's supposedly innocent citizens.
According to the law of karma, the neighbourhood supermarket or hamburger stand has more to do with the threat of war than anything else does. We recoil with horror at the prospects of nuclear war while we permit equally horrifying massacres every day inside the world's automated slaughterhouses.
The person who eats an animal may say "I haven't killed anything". But when buying neatly packaged meat at the superstore you are paying someone else to kill for you, then both of you bring upon yourselves the reactions of karma.
Can it be anything but hypocritical to march for peace and then go to McDonald`s for a hamburger or go home to grill a steak? This is the very duplicity that George Bernard Shaw condemned:
“We are living graves of murdered beasts
Slaughtered to satisfy our appetites
We never pause to wonder at our feasts
If animals like men could possibly have rights.
We pray on Sunday that we may have light,
To guide our footsteps on the paths we tread.
We are sick of war; we do not want to fight,
And we gorge ourselves upon the dead.”
Ahimsa allows the animal to live a natural evolutionary progress. However if it is killed it will need to return to live out the rest of its life in that same species.
Those who understand the laws of karma know that peace will not come from marches and petitions, but rather from a campaign to educate people about the consequences of murdering innocent animals, not to mention unborn children