Our Material Universe called a Brahmanda is but just one in a multi-verse, even the latest scientific speculation believe our individual Brahmanda Universe is but one of billions of other Universes.

Around 22 Quadrillion 222 Trillion 222 billion deep inside the Brahmanda at its middle is found another smaller inner Universe that is just 4 billion miles in diameter and called the Bhu-Mandala Universe that has 14 different Planetary Systems within it.

Also at the bottom of the Bhu-mandala Univere is an expansion of Maha Vishnu caled Garbhodakashayi Vishnu from whom a stem grows from His naval and at the top of the stem is a lotus flower where Lord Brahma resides.

Within and surrounding the stem which is Mt Meru, possibly symbolically exists all 14 Planetary Systems.

The inner Bhu-Mandala Universe is 4 billion miles in diameter.

There are "seven material layers" of the Brahmanda Universe

So the full size of our Brahmanda Egg shaped Universe is a massive 44 Quadrillion 444 Trillion 444 billion miles in diameter.

The layers or elements covering the universes are each ten times thicker than the one before, and all the universes clustered together appear like atoms in a huge combination. 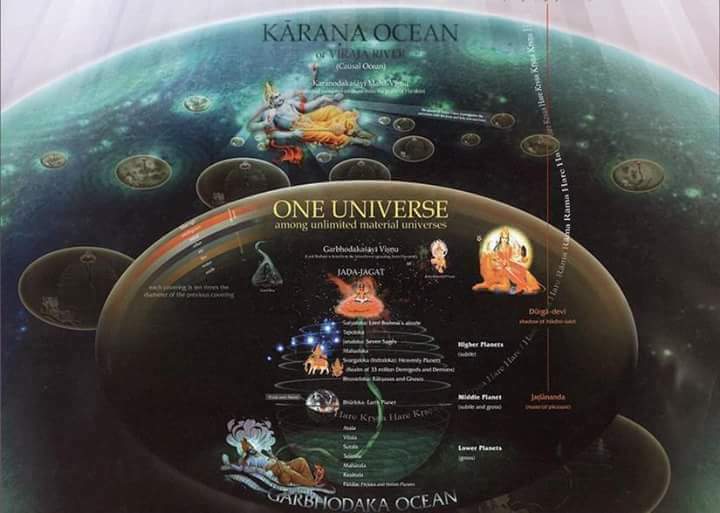 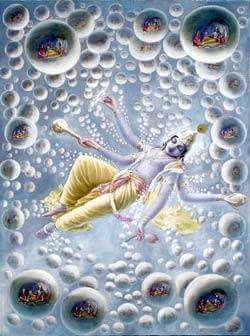