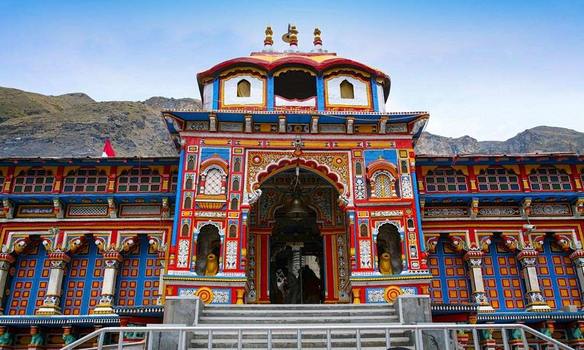 Having been joined at Rishikesh on May 11, 2022, by padayatris from the Maharashtra, Utkala-Banga and Uttar Pradesh padayatras along with several congregation devotees, the All India Padayatra began its char dhama yatra and after a journey of twenty days reached Badrikashram dhama on May 30, the AIP’s seventh round to Badrinath.

From Rishikesh we crossed the Panch Prayags, five confluences of the Alaknanda River:  Dev Prayag, Rudra Prayag, Karna Prayag, Nanda Prayag and Vishnu Prayag. We first reached Dev Prayag where the Alaknanda meets the Bhagirathi River before flowing onward as mother Ganges. We all had a holy dip and then continued to Rudra Prayag, which celebrates the convergence of the Mandakini River with the Alaknanda. Narada Muni performed austerities here, praying to Lord Shiva for many years to persuade Shiva to keep him as His disciple. A black rock called the Narad-shila is situated at the site, believed to be the place where Narada meditated.

At Rudra Prayag the road divides, one going to Kedarnath and the other towards Badrinath, passing by Karna Prayag, Nanda Prayag and Vishnu Prayag. Karna Prayag is where the Pindar River, originating from the retreating Pindari Glacier, amalgamates with the Alaknanda and is the place Karna meditated and acquired kavacha (armour) and kundal (earrings) from his father Surya (the sun god). It is also believed to be where Lord Krishna performed the last rites of Karna. Nanda Prayag, where the Alaknanda is joined by the Nandakini River, got its name from Nanda, the Yadava king. His devotion to Lord Vishnu here earned Nanda the boon of having a son like Vishnu, and hence he got to raise Krishna (an incarnation of Vishnu) as a foster father.

We then came to Joshimath, where Adi Shankaracarya performed penances and was inspired to compile scriptures and is home to one of the four cardinal pithas established by him. Joshimath is also the location of a Narsimha Bhagavan temple considered to have been established by Shankaracarya. Moving on we came to Vishnu Prayag at Pandukeshwar village, where the Alaknanda meets the Dhauliganga River and where Narada meditated, after which Vishnu appeared before him. It is a 24km climb to Badrinath from here.

Our next stop was the hamlet of Hanuman Chatti, where the Ganga and Yamuna rivers converge and which marks the start of the road to Yamunotri. There is a story of how this place got its name. Bhima was travelling on the road here when he came upon an old monkey lying in his way. Bhima requested the monkey to move his tail, which was blocking the path. The monkey replied that he was elderly and did not have the strength to move his tail, but invited Bhima to try. After repeated attempts the powerful Bhima became humbled and gave up. The monkey then revealed himself as Hanuman. There is a small saffron-coloured temple here dedicated to Hanuman.

The trek from Hanuman Chatti to Badrinath is steep and the freezing temperature and wet roads made it difficult to walk, but by the Lord’s mercy we reached the dhama safely. Badrikashram (3300m), on the banks of the Alaknanda in the Garhwal hills division of the Himalayas, is one of the four sites in India’s char dhama pilgrimage. The town lies between the Nara-Narayana Mountain ranges 9km east of Nilkantha Peak (6500m). Although mentioned in Vedic scriptures, Badrinath’s Badri Vishal temple was a Buddhist shrine till the eighth century when Shankaracarya converted it to a Hindu temple. It is one of the five Badri temples: Adi Badri, Vridha Badri, Bhavishya Badri, Yogadhyan Badri and the Badri Vishal temple.

At Adi Badri village south of Karna Prayag there is a small tenth-century, sixteen-temple complex, the main temple of which contains a beautiful 1m-tall carved black-stone murti of Adi Badri Narayana holding a mace, chakra and lotus; Vridha Badri in Animath village is where Narada performed tapasya and Lord Vishnu appeared before him as Vridha Badri (old Badri); Bhavishya Badri is in Subhain village that prophecy says will be the future Badrinath, the home of Vishnu at the advent of Satya-yuga; and Yogadhyan Badri in Pandukeshwar village 20km from Joshimath is said to be the birthplace of the Pandavas. King Pandu, the father of the Pandavas, performed penance here to atone for the curse he received for killing two mating deer (who were sages in their previous lives) and installed a bronze murti of Yogadhyan Badri in the village.

Our party joined the long queue at the Badri Vishal temple for darshan of Lord Badri Vishal, a small shaligram (black granite) deity of Vishnu in the form of Badrinarayana seated in padmasana, the only Vishnu deity in this yogic pose. We remained in Badrikashram for three days performing sankirtan together with the town’s enthusiastic residents and also visiting the many kundas filled with hot sulfuric water located around the temple. Pilgrims bathe in the kundas before taking darshan in the temple. Each hot spring is at a different temperature and some are extremely hot. Before entering the temple, it is customary for one to bathe in Tapta-kunda, a hot-water tank (45°C) at the base of the temple steps near the river.

On another occasion we went to Vyasa gupha at Mana village 4km northwest of Badrinath near the Tibet border. The sage is said to have divided the Vedas into four parts and narrated many Puranas at this place. The front of the cave is painted white and houses a deity of Vyasadeva. Nearby is the cave where Ganeshji wrote the Vedas spoken by Vyasadeva. There are rocks here resembling layers of paper said to represent Vyasadeva’s Mahabharata and Srimad-Bhagavatam.

Also of interest were the Nara-Narayana ranges that tower over Badrinath while Nilkantha Peak (6500m), which changes colour at sunrise and sunset and is known as the queen of the Himalayas, soars behind them. Nara Parvat is opposite the Badri Vishal temple while Narayana Parvat is behind the temple. They are named after Nara and Narayana rishis who meditated here.

The journey from Rishikesh to Badrikashram was a wonderful adventure and as we walked, we had darshan of each temple and confluence and meditated on the Lord. We will now push on to Kedarnath, Gangotri and Yamunotri dhamas.

We could do this only by the mercy of Guru and Gauranga.