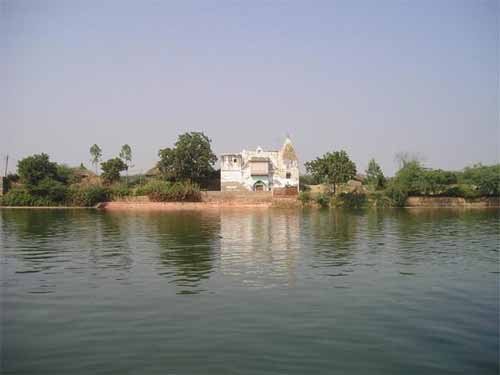 The day known as Aksaya-tritiya occurs on the third (tritiya) day of the waxing moon in the month of Vaisakha. Every second of this blessed day is completely auspicious, and so there is no consideration of any one period (muhurta) being better than another. Aksaya means “inexhaustible”; anything a person undertakes on the day of Aksaya-tritiya is bound to succeed, especially the performance of devotional activities, which guarantee inexhaustible benefit.

It is said that Aksaya-tritiya is the day when Treta-yuga began and the river Ganges descended to earth. Also, the festival known as Candana-yatra starts on the Aksaya-tritiya.

In the Madhva-sampradaya, Aksaya-tritiya is celebrated as the day of the incarnation of Lord Vishnu as Parasurama. In the Sri Krishna Mutt monastery a special festival takes place during which the aksaya-patra, the marvelous pot gifted by the sun god to Draupadi, is worshiped. Srimati Draupadi was given the benediction that her pot would provide unlimited food at each meal, until she herself ate from it. It appears that the pot came under the custody of Sri Madhvacharya, and on Aksaya-tritiya it is worshiped and prasada is lavishly distributed throughout the day.

In Nandagrama, where Sri Krishna enjoyed his childhood pastimes with Nanda Maharaja and Mother Yasoda, an interesting incident took place on Aksaya-tritiya. When Nanda Maharaja established his residence in Nandagrama, he excavated a large lake, then known as Nanda Sarovara. Nanda Maharaja, his family members, and all the Vraja-vasis used to bathe in that lake. And it is said that while Nanda Maharaja and his family bathed at one end of the lake, Vrsabhanu Maharaja would occasionally come and bathe with his family at the other end. According to local tradition, Srimati Radharani and Krishna used to swim underwater to the middle of the lake and engage in pastimes.

One day, little Krishna noticed that instead of cooking the usual meal of rice, dal, subji, and chapatis, Mother Yasoda was making all kinds of fried preparations with dal, noodles, and flour. When Krishna asked her why she was cooking those things, she replied that Nanda Maharaja was going on a pilgrimage the next day and that the fried things she was cooking would last for several days without spoiling.

Krishna then asked where His father was going, and Mother Yasoda replied that he was going to Prayaga. Little Krishna went to Nanda Maharaja and asked him where Prayaga was and why he was going there. Nanda Maharaja explained that Prayaga is the most sacred place where the three rivers Ganga, Yamuna, and Sarasvati meet and flow together and that to take bath there was most auspicious.

The next morning was the Aksaya-tritiya, the perfect day to start on a long journey. As usual, Nanda Maharaja got up early and went to take bath in his lake. When he got there, he saw a man he had never seen before, an imposing, regal person, rolling in the dust. While rolling in the dust, the man laughed loudly. Every now and then he would get up and dive into Nanda Sarovara, and then again he would come out and roll in the dust and laugh, and again bathe in the lake.

Nanda Maharaja approached the kingly man and asked, “Maharaja, who are you?”

“Prayaga? I don’t know anyone in Nandagrama with that name.”

“And why have you come here today, Maharaja?”

“Baba, all year long people come and bathe in my waters and leave their sins. So, every year, on Aksaya Tritiya, I come here, roll in the dust of Vraja, and bathe in this sarovara, because this dust and this lake have the potency to purify (pavana) one from all sins.”

Nanda Maharaja was amazed. Suddenly, he noticed that on the other side of the lake were many beautiful ladies in silk saris embroidered with gold and silver threads. They were also bathing in the lake. Approaching them respectfully, Nanda Maharaja asked who they were.

One lady replied, “Baba, I’m Ganga.” Another said, “I’m Sarasvati.” And yet another said, “I’m Godavari.” They all responded with the names of different holy rivers: Kurujangala, Kaveri, Narmada, Brahmaputra, Mahananda, etc.

Then Nanda Maharaja asked, “And why have you come here today? I’ve never seen you before.” The ladies explained that all year long people put their sins within their waters and that every year on the Aksaya Tritiya day they came to Vraja to roll in its dust, bathe in the sarovara, and become purified (pavana).

After taking his bath, Nanda Maharaja went back up the hill to his residence. By that time little Krishna was awake. Coming before His father, He asked, “Baba, are you going now?” “No, Lala. I’m not going.” “Why, Baba?” “Because today, all the places I wanted to go came to take bath in our lake and become purified (pavana). So why should I take the trouble to go to them when they all came here?”

From that day, Nanda Sarovara became known as Pavana Sarovara.