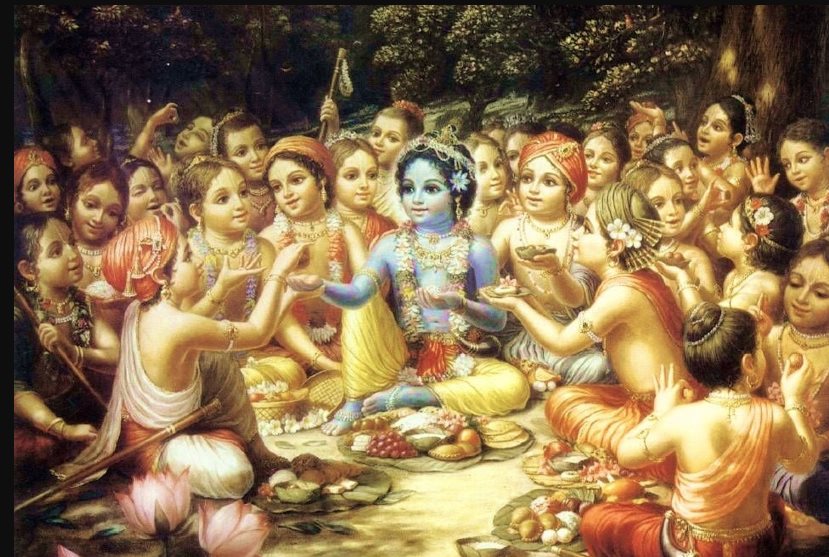 The secret to protection and universal welfare

“Absorption in Krsna” and “Dependence on Krsna” are the two main aspects of spiritual life demonstrated by Lord Sri Krsna in Sri Vrndavana. A materialist is generally absorbed in one’s own self and has quite a lot of faith and pride in one’s own intellectual capabilities, achievements, resources and contacts. As opposed to such materialists, the Vrajavasis are a group of people who are totally absorbed in the thoughts of how to serve Krsna and are totally dependent on Krsna’s mercy to fulfill their own desires to serve Him.

Krsna, right from the beginning of the Tenth Canto of Srimad Bhagavatam, through the example of Vasudeva and Devaki, demonstrates that: “I am pleased by those whose consciousness is characterized by total dependence on Me, either in prosperity or in adversity.”

Vasudeva is described as “sauri” or one who is brave (SB 10.3.47). In the Srimad Bhagavatam there is no record of Vasudeva demonstrating any kind of chivalry. In fact, Vasudeva had to beg his adversary, Kamsa, to show compassion and not kill his wife. Vasudeva was imprisoned by Kamsa not once but twice. Vasudeva couldn’t protect his six sons from Kamsa’s atrocious infanticide. The reason for this was that Vasudeva refused to lose hope and his dependence on Krsna’s will, despite all odds and apparent defeats, demonstrating great restrain and tolerance. Although not on his army or sword, Vasudeva employed his faith in the prophecy that Krsna would soon appear and bring an end to the reign of Kamsa’s terror. Srimad Bhagavatam thus establishes dependence on Krsna, even in the face of repeated losses, as the highest form of bravery!

At Krsna‘s birth Vasudeva continued to display the firmness of a mature devotee in serving Krsna. Shortly after His appearance, Krsna instructed Vasudeva to carry Him to Vrndavana. Determined in his dedication to follow Krsna’s instructions, Vasudeva picked up Krsna and prepared to

leave the prison, without any doubt as to how he would overcome the locked doors and the cruel guards! And in deed without delay, the jail doors opened, the shackles broke and Vasudeva proceeded on his service to Krsna, completely dependent on His will. Krsna thus illuminated the principles of apratihata bhakti, unchecked and unceasing devotional service to Him.

Another interesting episode in the Tenth Canto of Srimad Bhagavatam is the Brahma- vimohana-lila enacted under the power of Krsna’s yoga-maya. Lord Brahma, one of the supreme most personalities in the entire universe, was bewildered. Unable to appreciate Lord Krsna’s supreme position, seeing Him as a simple cowherd boy, Brahma decided to test Him. So, Brahma stole and hid the cows and calves who were peacefully grazing in the lush green forest. The cowherd boys while searching for their cows and calves called out to Krsna in anxiety. Krsna, while consoling them, told them not to worry but to continue staying there and enjoy eating their lunch. He assured them saying, “I will go and get the calves. You don’t worry.”

Krsna’s reassurance to the distressed gopas is a hidden blessing for all the devotees. The word ‘go’ in the Sanskrit language has multiple meanings. Go means cows and it also refers to our senses. A sadhaka’s senses may sometimes wander about just like the calves wandering in the forest. Finding it difficult to win over the mind and the senses, the spiritual practitioners feel morose, hopeless and defeated. The short-term distractions of agitated senses could make them give up devotional practices and aspirations, leading them to long term deviations. But, if we just try to absorb our wayward senses in our practice of core bhakti principles and sincerely depend on Krsna, He will personally make sure to bring our senses back under our control and care. The personal assistance of Krsna in spiritual life is available only to the bhakti-yogis and not to the adherents of other spiritual paths. Of course, this promise is not to be taken advantage of. But for a Krsna’s devotee there is never a reason for despondency, even in the face of sensual wanderings.

In order to compensate for Brahma’s thievery, Krsna expanded Himself into unlimited cows and calves. Later, Brahma saw all of the cows and calves transform to Visnu-murti forms, bewildering the intelligence of the most intelligent being in the universe. There it is described:

When Krsna’s beautiful smile and His beautiful glance fell upon Brahma, it created desires in Brahma’s sorry heart, to serve Krsna. Similarly, in our devotional careers when challenges and difficulties arise and we feel hopeless, we need to turn to Krsna. In our state of hopelessness, we will find new encouragement by looking upon the glance and the smile of the Lord. The glance of the Lord creates devotional desires and the smile of the Lord creates transcendental hope in devotee hearts, especially those who have been poked and provoked by their unchaste senses and reclusive mind. As a regular Vaisnava practice, a devotee is recommended to sumptuously receive the darsana or audience of the deity incarnation of the Lord. This again is a transaction of absorption and dependence on His grace in our spiritual lives.

A sadhaka is expected to go through in this world addressing many challenges. The Tenth Canto gives a description of the rainy season, when the rain falls on the mountain, to make a deep point.

It is being said here that due to the heavy downpour, thunder-strikes and wild stormy winds the mountains may be perceived as being in an extremely painful situation. But mountains don’t shake, they are tolerant and receive that heavy rain fall upon themselves without complaint or criticism. The result of such forbearance is that all the accumulated dirt and dust is thoroughly washed away. Similarly, we should remain tolerant and steady like a mountain to wash away our contaminations of heart and consciousness when the rains of difficulties fall upon us.

The functional utility of failures and defeat in our lives is to avail us opportunities to remember Krsna and depend upon Him. Most people think that the game of life is to score wins, acquire victories, avoid losses and minimize defeats. Srimad-Bhagavatam, however, is revealing that the game of life is not to count our victories or defeats but to count how many times we are able to remember Krsna through these victories and defeats. What use is any success, which is bound to go null and void with the passage of time, devoid of remembrance of Krsna, our eternal friend and guardian!

The present gigabit-age and post-modern era are times where society is spiritually bankrupt. It is an age of distraction and selfish self-absorption. Social anthropologists have coined a term for the distracted masses of the internet age – The Instagram Generation. Professor Daniel Kahneman, a renowned psychologist and Nobel Prize winner pointed out that we now perceive the present as “an anticipated memory”. That is why people are busy taking pictures of everything and applying filters and posting everything online. This is being done in anticipation of looking back at these shots of the present in the future and cherish how “picture-perfect” their past was. But in so doing people are losing connection with the present, driven by the anticipated future memories of their past!

Social media burnout is now a clinically diseased condition symptomized by feeling the need to constantly check the phone or computer, a feeling of lack of interest in other activities or hobbies enjoyed in the past, feelings of anxiety over social media posts etc. A question arises, how did we reach this point? The honest answer is that while we have made technological progress, our generation has developed a false sense of total independence. People seriously believe that there is an “App” for everything and as a result, losing connection with the natural world. In light of today’s conditions two of the greatest fundamental principles of bhakti – absorption and dependence – have been lost even in lives of sadhakas.

Just as with the spread of an epidemic the opportunity for the doctors arose, for all these victims of technologically infected distraction and independence, the bhakti principle of absorption and dependence can act as the antidote if administered by sincere practitioners of bhakti-yoga. The Hare Krsna movement therefore has a major responsibility like never before, with the suffering souls in the age of Kali increasing and enhancing with each click of the mouse and each tap on the mobile screen. The need is there, the means of bhakti-yoga is also there and so is the medicine of the holy name; what is required now is to prepare ourselves for the mission. But unless we ourselves become absorbed and dependent on Sri Krsna, how can we ever try or claim to cater it for others.