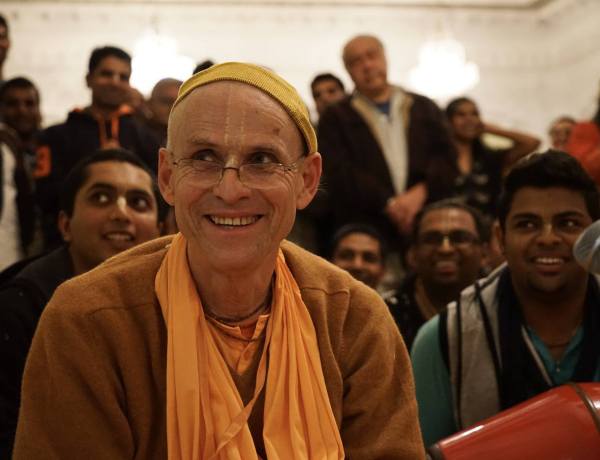 Bhismadeva was not only a pure devotee, but very much a self-reliant devotee. He was a devotee who chose the transcendental position even though he was in a condition of life which was mundane. Living in a royal court is not the ideal situation for a brahmacari. Generally, brahmacaris are nicely locked away in the brahmacari ashramas, where they are protected from the heavy aspect of sense gratification straight in their face. But here, Bhismadeva was living in royal opulence, a very difficult condition for a brahmacari. But somehow or other, Bhismadeva managed to do so because his vision was completely transcendental and therefore he was totally detached. He was not a brahmacari who simply wanted to avoid the troubles of material life and on that basis decided that, “I am not going to get married. I do not want to pay all those bills.” But rather, he was attached to Krsna and because he had such deep attachment to Krsna, his renunciation was therefore based on genuine detachment.

So on this basis, Bhismadeva was able to take that glorious position of pronouncing that he would remain a brahmacari for life. At that time, the demigods resounded their drums. It rained flower petals from the sky. Then Bhismadeva’s life unfolded further and as it unfolded, he would see that he was always the one to bring the spiritual influence amongst the Kurus. Particularly the Pandavas, who were pious by nature, took advantage of that transcendental association.

We see however that Bhismadeva is on the side opposing the Pandavas. However, that is only external. If we really look at it on a deeper level, it is simply an arrangement for him to express that vira rasa – the mood of chivalry. This mood of being a warrior is so deeply engrained in that satya spirit that even in his relationship with Krsna, he desired to have that warrior exchange. While others offered flowers, Bhismadeva offered arrows. When these arrows were showing wounds on Krsna’s body, that was the perfection. And of course, it was not only Bhismadeva who was relishing this exchange of chivalry, it was Krsna as well. Because Krsna also enjoys a good fight!