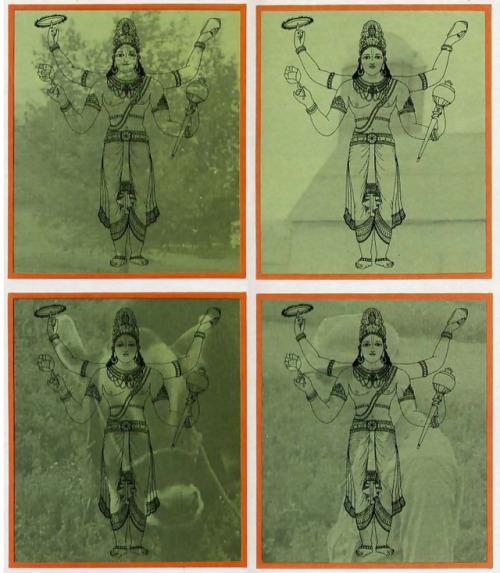 In Mechanistic and Nonmechanistic Science (1981) (MNMS), Richard L. Thompson presents a nonmechanistic theory of consciousness drawn from the Bhagavad-gita, a summary of Indian’s ancient wisdom.

He reveals his motivation:

It [science] tells us that the individual person is nothing more than a machine composed of material elements. This machine has come into being only because it and the other machines in its ancestral line happened to be effective at self-duplication in their particular environmental circumstances. All of this machine’s attributes—including its thoughts and feelings, its abilities, and its hopes and desires—are meaningful only insofar as they contribute to the propagation of the machine’s genetic blueprint. And this is meaningless in any ultimate sense, for the genes themselves are nothing but inanimate molecules… .

In psychology the mechanistic premise implies that mind is merely a name for certain patterns of electrochemical interaction in the brain. This means that psychological terms such as “purpose” or “meaning” correspond to nothing more than patterns of behavior that arose as evolutionary adaptations. The mechanistic premise implies that it is pointless to seek an absolute sense for such terms or to apply them on a universal scale, for the universe as a whole consists of nothing but an inexorable flux of physical actions and reactions… .

Of course, some people may argue that if we have no purpose in an absolute sense, we can create our own purpose. Yet … if we contemplate such [a] manufactured “purpose” from the mechanistic viewpoint, we see it dissolve into nothing but a meaningless juxtaposition of physiochemical events… .

Actually, the mechanistic principles cannot support any line of reasoning about how people should behave. The mechanistic philosophy implies that you will simply do whatever your bodily chemistry drives you to do. This philosophy denies the very idea of the self as a responsible agent with free will, and thus it also renders meaningless the idea of moral choice.

In chapter one of his book, Richard Thompson analyzes visual perception and shows that consciousness cannot be identified with the image on the retina, the impulses traveling down the optic nerve or the activity in the visual processing centers of the brain. Visual data is transformed from one form to another, but nowhere is conscious sight taking place. He concludes that a nonphysical self perceives and makes sense of complex patterns of information in the brain and illustrates this with an analogy. As a person reading a book is not conscious of the ink on the paper but is aware of the plot and theme of the story, the conscious self is not aware of the states of the different neurons in the brain but rather complex patterns of information stored there.

Speaking through the character Avaroha in a dialogue between characters representing different viewpoints Thompson summarizes the Bhagavad-gita understanding of the conscious self. Thompson uses the term jivatma instead of the more common atma to distinguish the individual conscious self from the paramatma (the supreme consciousness):

The Bhagavad-gita states that each individual living organism consists of an irreducible conscious entity riding in a physical body composed of gross material elements. The body is insentient, and it is described in the Bhagavad-gita as a complicated machine. (Bg., p. 830) In contrast, the conscious entity, or jivatma, is the actual sentient self of the living being, and it cannot be explained in mechanistic terms. (Bg., Chapter 2) Each jivatma possesses all of the attributes of a person, including consciousness, intelligence, and innate sensory faculties. These attributes cannot be reduced to the interplay of some underlying impersonal entities that we might hope to describe by a mechanistic theory. In a sense, we can compare the jivatmas with the hypothetical fundamental particles sought by physicists. Just as these particles are envisioned as having certain irreducible material properties, so the jivatmas can be thought of as fundamental units of conscious personality endowed with certain irreducible personal traits. (MNMS, p. 76)

Later he describes the conditioned and liberated states of the conscious self:

When the jivatma is embodied, its innate senses are linked up with the information processing system of the physical body, and thus the normal sensory perceptions of the jivatma refer almost exclusively to the physical states of machines, including the machine of the brain. (Bg., pp. 702–704) In this condition, only the jivatma’s direct perception of its own internal sensory and cognitive activities involves something that cannot be described in terms of mechanical configurations. For this reason, there is a strong tendency for the jivatma to overlook its own nature and view the world in an entirely mechanistic way.

But the inherent senses of the jivatma are not limited to observing the states of the physical body. The jivatma is capable of a relation of direct reciprocation both with other jivatmas and with the paramatma, or the Superconsciousness. This mode of interaction directly involves the use of all personal attributes and qualities, and thus it cannot be described in mechanistic terms. It can be understood and meaningfully discussed only by persons who have attained to this level of experience by direct realization. (MNMS, p. 78)

Nobel prize winning physicist, Eugene Wigner, wrote about this section of the book, “I admired Avaroha – he not only reproduces … the ideas on reality virtually forced on us by quantum theory, he also points to the close similarity of these ideas with those of Bhagavad-gita. As I said, this was totally new to me and refreshing. Pages 76–78 [which I just quoted above regarding the Gita’s theory of consciousness] are truly excellent.”
Thompson further explains, “The advantage of the Bhagavad-gita is that it provides extensive information about consciousness, and it also provides scientific procedures whereby a person may make practical use of this knowledge.” (MNMS, p. 81)

In Chapter 6 of his book, Thompson uses information theory to explore the claim that complex biological form can be produced from simple fundamental laws of nature in the course of vast amounts of time, and concludes the probabilities are so low that it could not happen. Complex biological form requires a complex description not present in the known laws of nature. He then introduces another element of the Bhagavad-gita’s description of consciousness, namely paramatma, the supreme consciousness, as the source of the complex forms of the living entities. As Krishna says in Bhagavad-gita 14.4, “It should be understood that all species of life … are made possible by birth in this material nature, and that I am the seed-giving father.”

In Chapter 7 of the book, Thompson discusses inspiration, where one suddenly receives the solution to a problem without having consciously made steps leading up to it. The mathematician Poincare proposed a model where the brain subconsciously tries many possibilities until the solution is found. Thompson points out the enormous number of trials needed and the extremely unlikelihood of such a mechanism evolving are problems with that model. The model in Bhagavad-gita of a supreme consciousness aware of the desires of the individual conscious self and able to manipulate matter in accordance with them is a simpler solution. In the Gita, such enlightenment by the supreme soul is described in verses such as “To those who are constantly devoted to serving Me with love, I give the understanding by which they can come to Me. To show them special mercy, I, dwelling in their hearts, destroy with the shining lamp of knowledge the darkness born of ignorance.” (Bg. 10.10–11), and “I am seated in everyone’s heart, and from Me come remembrance, knowledge and forgetfulness.” (Bg. 15.15)

Thompson uses an analogy from science to illustrate the relationship between the individual and the supreme consciousness:

In Thompson’s discussion he says though some may protest that knowledge of the conscious self and the supreme consciousness is not verifiable, it is certainly more verifiable than some new scientific theories involving multiple splitting universes. (MNMS, p. 83)

Since neither the individual or supreme consciousness can be measured with the devices of science, Thompson proposes the nonmechanistic science of bhakti-yoga as the means of verification.

Anticipating people will argue that the experience derived from bhakti-yoga is subjective and thus unscientific, he gives an analogy of two people watching a sunset in the presence of one who is blind from birth. The two people describing their vision of the sunset can be confident they are sharing the same experience, while the blind person may either accept it or reject it in blind faith. Thus two self-realized souls could confirm their realization while those not on that level may or may not accept their version, although it is real to them.

That the realizations of bhakti-yoga can only be confirmed by some, may cause people to reject it as unscientific, but actually that difficulty is present to a even greater degree in scientific fields like physics where one needs a multi-billion dollar particle accelerator and years of education to verify findings. Anyone can practice bhakti-yoga who has the desire to do so, without any cost, special qualifications, or years of education.

Thompson explains, “One of the most important principles of bhakti-yoga is that higher realization is impossible as long as the material senses are not brought under control. In the materially conditioned state of consciousness, the jivatma is motivated by the desire to enjoy his material situation, and he is completely preoccupied with the barrage of stimuli presented by his material senses. In this state the jivatma’s sensory channels are overloaded, and he is unable to perceive the presence of the Supersoul, even though he is constitutionally capable of doing this. Since the jivatma with uncontrolled senses has no direct access to the Supreme Person, he is prone to indulge in fanciful speculations that simply lead him further and further from the truth.” Later he quotes one Bhagavad-gita verse in this connection:

“For one who has conquered the mind, the Supersoul is already reached, for he has attained tranquility. To such a man happiness and distress, heat and cold, honor and dishonor are all the same.” (Bg. 6.7)

He introduces the positive and negative injunctions of bhakti-yoga which make conquering the mind possible. These involve refraining from activities which agitate the senses and thus the mind and adopting acts to bring the mind in touch with the supreme soul by hearing and chanting about Him. The absolute is present in the form of transcendental sound that can be heard and vibrated, and one can experience this by practice. In the Vedic tradition, one particular mantra is stressed for attaining realization in this age:

Although famously chanted by the Hare Krishnas, other groups such as Siddha Yoga, also chant it, knowing it to be recommended as protecting one from the faults of this age and promoting spiritual enlightenment.

Thompson mentioned just as in science you have authoritative literature and a community of scholars who can verify one’s progress in a certain field of study, there are bodies of literature revealed by the supreme consciousness and others empowered by Him and lineages of spiritual teachers and communities of sadhus (saintly persons) who can verify one’s progressive realizations in bhakti-yoga and thus it can be considered a bona fide science, although a nonmechanistic one.