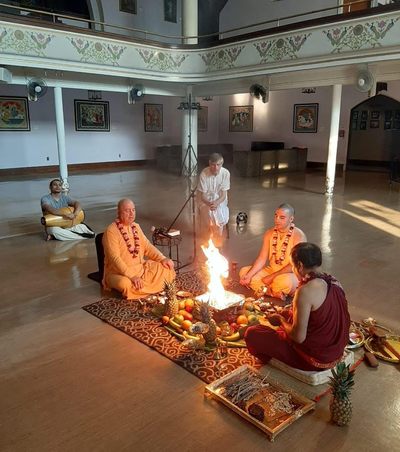 I’ve known Corrado for a number of years, since he first started coming to our temple/ashram. He first met one of our exemplary devotees, Shyama Mohini, who has a passion for distributing the books of our guru, Prabhupada.  This happened on a street in Toronto.  Corrado is indebted to her for being his initial contact.

From then on, Corrado began attending bhakti-yoga gatherings, held at the Bhakti Lounge. He experienced a growing interest in the process of chanting, philosophizing, eating great vegan food and considering himself a devotee of Krishna. He has a background in dance, in the genre of ballet. He is also qualified as a yoga teacher.

Some time back, while cycling on Yonge Street, he got into a serious accident—a collision with a car—and that experience became somewhat of a catalyst for him to get more serious about life. He spent a year at the Yoga Farm, at Gita Nagari, in Port Royal, Pennsylvania, before joining me in India this spring when we worked on a production titled, “Grandsire: The Life of Bhisma,” which was highly appreciated by our audience in Mayapura.

Thank you, Corrado, for bringing that touch of professionalism to the dramatic piece.

He has accepted initiation, diksha, and took on the name “Krishna Chandra,” which means the Krishna Moon. He also began wearing saffron clothes, suitable for a practising monk. Congratulations!