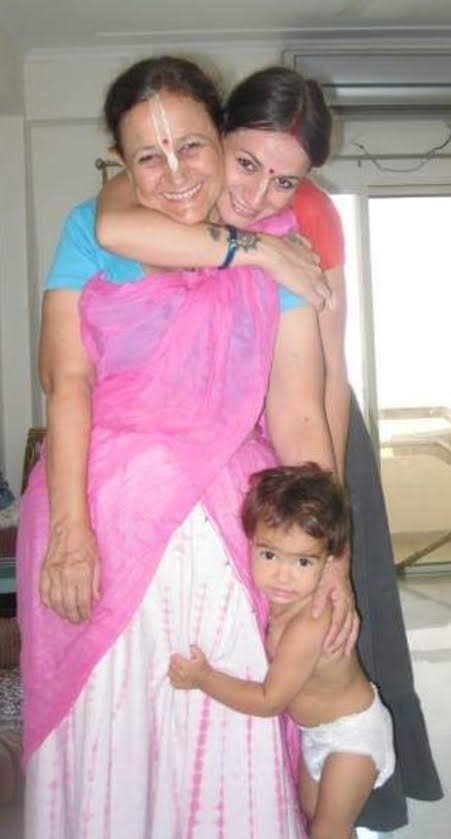 Dearest Devotees and Friends,
AGTSP. PAMHO.
It is with a heavy heart I am writing this. Our dear and very special Vaisnavi sister, Priya Sakhi devi-dasi from Spain, wife of Nandagopa Das (ACBSP), mother of Krishna Virya, and doting grandmother, has departed this world after contracting this obnoxious coronavirus.

Priya Sakhi was a very saintly personality. I could not bear to see that there was not proper glorification afforded the departure of such a great soul, so I would like to share my experience of her association with you.

Priya joined ISKCON when she was around 14 years old, serving first in France, and then in many other countries. She considered herself the oldest “kuli.” She was fluent in many languages: Greek, Italian, Hindi, Bengali, and Spanish, and more. This enabled her to communicate with and serve the worldwide community of devotees. She was also very dedicated to her daily worship, and was an amazing cook. She somehow managed to maintain her daily sadhana and worship despite her busy life of service.

I met her when we were both living in Vrindavan around 2007. She was acting as our community nurse, and was very expert at acquiring medical equipment and assisting in the care of sick and dying dhama-basis and devotees. She was the kindest, most compassionate person I have ever met. If she heard of anyone suffering, she would neglect her own needs, her own schedule, sometimes even her own family, and run day or night to any remote place to help. She has helped numerous souls. We all know how hard it is to achieve any results in India, but she had a very special gift, I used to say to her that it was a “boon,” of being able to acquire anything or do any seemingly impossible task very easily. Due to her efforts, so many lives were saved and so many were made comfortable by her obtaining equipment or medicine for them. She would use her own family money and go around begging for donations from everyone she met, simply to help in the treatment of this or that sick or dying Vaisnava, to arrange accomodation, ensure around-the-clock care, food, medical needs. No situation was insurmountable for her. She was brave, stoic, tencious, fearless, loving, empathic, resourceful…too many qualities to name.

This was Priya Sakhi. Friend and well-wisher to all. Kind and non-envious. Above all else, she loved Sri Vrindavan-dhama. I have no doubt her selfless service to the devotee community has earned her the blessings of Srila Prabhupada, her beloved Krishna-Balarama, and Sri Sri Radha-Syamasundar…and a place in Goloka Vrindavan.