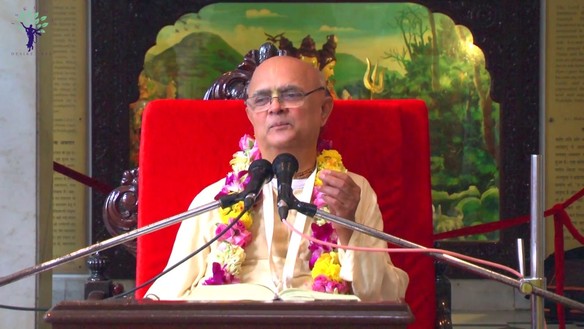 BY THE PURE desire and blessings of Srila Prabhupada, the Ahmedabad ISKCON center, which started in a humble rented space, now has one of the largest and most ornate temples in India.
Srila Prabhupada's venerable godbrother B. V. Puri Maharaja, religious speaker Murari Bapu, and the Honorable Chief Minister of Gujarat led the celebrations this past April to inaugurate the temple. More than ten thousand Gujarati devotees joined in.

During the first month after the inauguration, the temple was visited by more than three hundred thousand people.

Ten days of festivals (April 15–24) marked the completion of the first phase of the temple project.

The installation of Sita-Rama, Laksmana, and Hanuman took place on April 16, Rama-navami (the appearance day of Lord Ramacandra). His Holiness B. V. Puri Maharaja offered arati (worship) to the Deities, and more than two thousand people joined him in ceremonially bathing the Lord with waters collected from one thousand holy places.

Sri Radha-Govindaji and the other Deities were installed the next day. On this occasion, Gujarat Chief Minister Sri Shankersinh Waghela and religious speaker Sri Murari Bapu formally opened the temple and praised the achievements of Srila Prabhupada and his movement.

The chief minister said, "By coming to an auspicious place such as this I find great peace, and it reminds me of the great ancient heritage of India, when the powerful rulers were instructed by saintly religious authorities. The power of dharma is always above the material power. Only through dharma can a real welfare state be developed. Srila Prabhupada was such a religious authority, and it is my great pleasure to be present to inaugurate this wonderful offering to Srila Prabhupada on his centennial."

On the inauguration day more than ten thousand people received prasadam, food offered to Krsna. In the evening the well-known Bhupendra Singh and Mitali sang devotional songs. During the next seven days, artists such as Pandit Jasaraj, Anup Jalota, and Meenakshi Sheshadri offered cultural performances. On the last day, Srimati Hema Malini performed devotional music and dance.
During the festival, Srila B. V. Puri Maharaja, with tears of love in his eyes, put his hand on my head and said, "I have never seen such a beautiful temple and such beautiful vigrahas [Deities]. Krsna is very kind. The whole festival was very transcendental. This is a sure indication that He has agreed to appear here and bless the people of Gujarat."

Yasomatinandana Dasa is the temple president of ISKCON Ahmedabad.