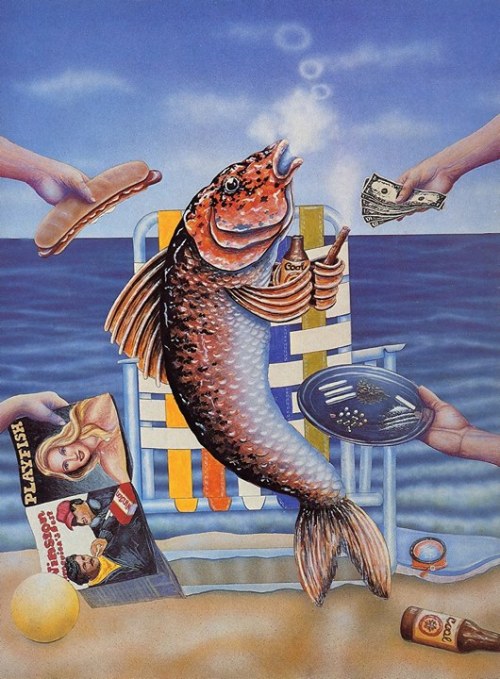 When you’re out of your element, nothing seems to satisfy.

For years, Frederick J. Fish lived a very ordinary life beneath the waves of the blue Pacific Ocean off Malibu. But one day he noticed that up on the beach there were finless creatures who appeared to be having more fun. So he rode in on a wave and hopped up on the sun-drenched sand. Soon he was all fixed up to enjoy himself—beach chair, FM radio, a cold drink, sunglasses. But something was wrong. Gradually Fred’s feeling of discomfort turned to panic. Finally, gasping for breath, he realized, “I’m out of my element!”

According to the sages of ancient India, we’re all out of our element. Originally, we all lived blissfully in the spiritual world, rendering transcendental loving service to the Supreme Personality of Godhead, Lord Krishna. Since this material world is not our real home, no amount of material gratification can satisfy us.

People often ask. If we were so blissful, why would we choose to leave the spiritual world? The answer is that we mistakenly thought we could enjoy greater happiness away from the Supreme Lord. In the spiritual world, God is the center of everyone’s attention. Everyone cooperates to serve Him. When a living being attempts to assume the position of God, he is forced to enter the material universe, where he can live out his fantasies of being the supreme enjoyer.

In the material world, a person tries to enjoy himself by becoming friends with the best sort of people, by picking the most attractive sex partner, by doing everything possible to guarantee a good future for himself and his family members. He dresses as sharp as he can, drives the most expensive car he can afford, takes vacations in posh resorts, buys a house in a good neighborhood. He gets a color television, a personal computer, a second home in the country. He eats at the best restaurants, savors his favorite intoxicants, and goes out to see first-run movies. But these material things can never completely satisfy the yearnings of the soul.

In a recent interview, Alfred Ford (Ambarisha dasa), great- grandson of Henry Ford and now a member of the International Society for Krishna Consciousness, spoke of the hopelessness of trying to buy happiness: “At a very early age, perhaps because I was born and raised in a very opulent situation, I began to notice that wealth alone can’t make people happy, and that everything in the world, even the ‘good things,’ are temporary.”

Sometimes people think that because devotees of Krishna reject material happiness they must lead extremely dull lives. Actually, transcendentalists are the most discriminating connoisseurs of pleasure.

Using this standard, we can see that any kind of pleasure derived from a material object is inferior to the spiritual pleasure obtainable from serving Lord Krishna, the Supreme Personality of Godhead, whose very name means “the reservoir of all pleasure.” Any person or object we try to enjoy in this material world will eventually be destroyed by the force of time, and the body with which we try to enjoy the material objects will also be destroyed. But the pleasure that comes from serving Krishna is eternal, because both the Lord and the soul are eternal.

Furthermore, pleasures derived from material objects and relationships are always mixed with pain. For example, there is some pleasure in sexual relationships between a man and a woman, but that is always followed by the burdens and difficulties of marriage, divorce, jealousy, envy, pregnancy, abortion, venereal disease, unfaithfulness, and so on. But the pure spiritual relationship of the soul with Krishna is purely blissful. The Nectar of Devotion, Srila Prabhupada’s summary study of a devotional classic called Bhakti-rasamrita-sindhu, describes the condition of one who has achieved love of God: “At that time one’s heart becomes illuminated like the sun, and from his pure heart there is a diffusion of ecstatic love more glorious than the sunshine.”

Finally, attempts to enjoy a material situation inevitably yield diminishing returns. The first ice-cream cone may taste delicious. The second may be just as good. But the third will be hard to eat, and the fourth may make you sick. At the very sight of the fifth, you’ll feel nauseous. But love for Krishna is like an ever-expanding ocean of transcendental bliss, and devotees pray to remain always immersed in its waves.

The Vedic literatures recommend a very simple process by which anyone can enter into this ocean of bliss: the chanting of the Hare Krishna maha-mantra—Hare Krishna, Hare Krishna, Krishna Krishna, Hare Hare/ Hare Rama, Hare Rama, Rama Rama, Hare Hare. This mantra is composed of Sanskrit names of God. Being Absolute, God’s name is nondifferent from God Himself and possesses all His transcendental energies. Five centuries ago Krishna appeared as Lord Caitanya and taught His followers: “The chanting of the holy name of God expands the blissful ocean of transcendental life.” That’s where we really belong, not washed up on the beach of material existence.

Tags: a fish out of water, drutakarma dasa
E-mail me when people leave their comments –
Follow