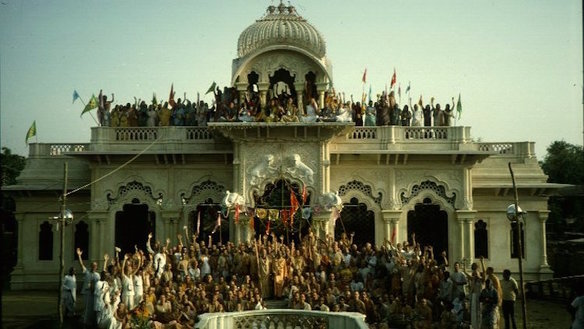 Even when there is duty, we have to see what will be the effect of the duty. Not everything should be done very blindly. This is devotee. Devotee means he’s not blind. Yasyasti bhaktir bhagavaty akincana sarvair gunais tatra samasate surah. (SB 5.18.12) [“All the demigods and their exalted qualities, such as religion, knowledge, and renunciation, become manifest in the body of one who has developed unalloyed devotion for the Supreme Personality of Godhead, Vasudeva.”] Bhagavad-bhakta means he will act in such a way that all is qualified; nobody can criticize him. That is bhagavad-bhakta. Sarvair gunais tatra samasate surah.

We have many instances. Raghunatha dasa Gosvami was a very rich zamindar’s son, and there was trouble between the minister of the state and his father and uncle. They were zamindars, raising revenues to the extent of twelve lakhs, and only four lakhs was going to the Nawab. So, this was the business. The minister came to arrest Raghunatha’s father and uncle, and they fled away from home. So the minister arrested Raghunatha dasa Gosvami. At that time he was not Gosvami; he was a grihastha, young man, Raghunatha. So, he handled the matter in such a nice way that the matter was settled between the minister and his father. The idea is although he was Vaishnava, he was not a fool in how to manage an estate. It does not mean that a Vaishnava will be fool because he’s Vaishnava. No. Vaishnava has twenty-six qualifications. One of the qualifications is daksa: he must be very expert in doing things very nicely. Not that because one is Vaishnava he’ll be callous in worldly things. No. Therefore I repeatedly request the management that you must be very expert in managing these temple affairs. Everything should be to the right point. Not a single farthing should be wasted. A Vaishnava must be daksa, expert in everything. This is no excuse, that “I have become a devotee; therefore I am callous to all material things.” What material things? Nirbandhah krsna-sambandhe yuktam vairagyam ucyate. (Bhakti-rasamrta-sindhu 1.2.255) [“When one is not attached to anything but at the same time accepts everything in relation to Krishna, one is rightly situated above possessiveness. On the other hand, one who rejects everything without knowledge of its relationship to Krishna is not as complete in his renunciation.”] Anything in relationship with Krishna is not material; it is spiritual. Don’t think this temple is an ordinary building. It is Vaikuntha. Cintamani-prakara-sadmasu. Krishna has His house, prakara-sadmasu. Sadma means house. So we should take very, very careful attention that this temple is kept very nicely, managed very nicely. Not that “I have become Vaishnava. Let everything be stolen or spoiled or broken. I have become Vaishnava. I cannot take care. That is not my consideration.”

Everything in relationship with Krishna is Krishna. Krishna is the advaya-jnana, Absolute Truth. Krishna and His name, His house, His devotees, His everything—nama rupa guna lila parikara vaisistya, everything.