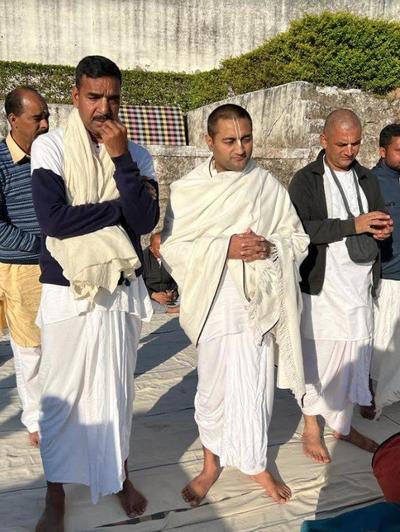 Preaching is the essence. Devotees preach by the order of Śrī Caitanya Mahāprabhu and the order of the spiritual master. Those who sincerely try to follow the directions of the spiritual master and the Guru-paramparā earn unlimited blessings and strength to execute their service. Even a sincere attempt in the service of the ācāryas, irrespective of it being a success or a failure, is sufficient to draw profuse blessings of the Guru-paramparā.

There are some devotees who serve in difficult situations and, most amazingly, they are able to transform the most unfavorable environment into the greatest opportunity to remember and serve the Lord.

Preaching within the prisons or jails is no different. Those who have some experience of going to preaching programs in jails can understand that it’s not very comfortable to stay inside for long. Dealing with the general public is not always easy and, at the same time, association with materialistic people certainly affects the consciousness. But preaching to the prisoners inside the jails has some merits despite the difficulties. Some of the inmates desperately want to come out, so they are eager to accept any ray of hope in their lives. But the challenge still remains as intoxication, cheating, bullying, bribery, smuggling and so on are all the ways of life inside the prisons in our country today.

Bhakta Vinod Chambyal-ji, the Deputy Superintendent (DSP) of Nahan Central Jail in Himachal Pradesh, candidly said to me that if he were to stay posted to any jail for a term of three years, and then if I were to visit the jail under his charge, I would feel that it has been transformed into an ashrama. Sri Vinod-ji depends completely upon the Lord and the previous ācāryas‘ blessings for the success of his efforts.

The eighth verse of Śrī Īśopaniṣad describes Krishna as śuddham (antiseptic) and apāpa-viddham (prophylactic). The Lord is always pure and uncontaminated. So, if we were to bring Krishna to a dirty place, even if it is the dingy barracks of a jail, then very soon the barracks as well as the inmates residing there would become completely pure.

The Lord and His holy names are all non-different, ”abhinnatvān nāma-nāminoḥ (Padma Purāṇa). Sri Vinod-ji takes shelter of the Lord’s holy names and Śrīla Prabhupāda’s timeless philosophy and spreads it among the inmates in the jail as well as his staff. Sri Vinod-ji conducts regular morning programs in the jail, the same way as it is practiced in ISKCON temples throughout the world.

Śrīla Prabhupāda has said, “Yes, it will be a great service, even in prison, if you can preach there. You should inform the authorities for protection if other prisoners attack you.” (Letter to Kunja Behari, Bhuvanesvara, 19 January 1977).

Being in a position of power, he says that by his single whistle, he can immediately get 500 inmates to assemble. He jokes that when we are outside, it’s sometimes difficult to gather devotees; but within the jail, he can easily gather men and have an ecstatic harināma saṅkīrtana.

Vinod-ji shares that by seeing the inmates’ eager participation and witnessing their lives getting transformed in front of his eyes, he has gained the strength to cast aside all despondency that arises and is able to challenge the age-old faulty traditions in his department. When a prisoner, who is badly addicted to heroin, who has been abandoned by his family, and whose body shivers continuously due to his severe addiction, improves drastically by Vinod-ji’s efforts, that speaks for itself.

Stopping the drug mafia who operate from within the jails on one hand and simultaneously keeping a check on his officials is not an easy task for Mr. Vinod. He has to be extremely vigilant not to leave any loophole open for the drugs to squeeze into the barracks, thus enraging some. It’s not very surprising that he or his men receive death threats, such as, “I am alreadly facing a life sentence for one murder and if I carry out a second one, I’ll still have the same life sentence!!!”

After having transformed a district jail in Dharmashala in Himachal Pradesh, where he was posted as its head during his last tenure and whose inner walls are all painted with pictures from Krishna Book, Sri Vinod-ji has now been the Deputy Superintendent (DSP) in Nahan Central Jail for the past three months. With full support from his Superintendent, Sri Vinod-ji has been able to make Nahan Central Jail completely drug-free and vegetarian within a very short time. Removing the non-vegetarian food from the menu inside was a challenge but it has helped a lot in improving inmates consciousness, Sri Vinod-ji added.

A step ahead, about 40 inmates voluntary practice the complete morning program rigidly, waking up during the Brāhma-muhūrta period, taking cold bath, chanting 16 rounds of Hare Krishna Mahāmantra japa, and attending his morning Bhagavad-Gītā classes, which are accompanied with with loud saṅkīrtana. This has all been achieved in just a short span of three months.

He happily remarked that he concluded this month of Karthik with a ‘deep daan‘ program with the singing of the Dāmodarāṣṭakam prayers with the participation of all the inmates, numbering about 500, and 150 of members of his staff. Such a festival provided a special boost of enthusiasm and energy to the inmates and encouraged them all to accept Krishna consciousness in their lives. Some people may unwillingly participate in these Krishna conscious events under the order of their DSP, but nonetheless, their participation brings about good to them; as in the analogy given by Śrīla Prabhupāda, medicine would act even if taken without the patient’s knowledge. When the vibrations of the holy names of the Lord spread throughout the jail premises, then automatically everyone present gets purified and the dormant Krishna consciousness within their hearts gets aroused. Sri Vinod Chambyal-ji treats all the inmates in his jail as his own family members and tries his best to help them improve and develop Krishna consciousness, thus fulfilling the responsibility of a genuine father.

Sri Vinod-ji is a long time practicing devotee and he gives all credit of his efforts to the blessings of the Lord and His devotees. Śrīla Prabhupāda is the source of his inspiration. After joining Krishna consciousness, Sri Vinod-ji has seen a notable change in his attitude and behaviour. Previously, the anger that used to disturb him while dealing with the corrupt bureaucracy is now only outward. All the corrupt men can see the strength of Krishna consciousness in his demeanor. It is this strength of purity and the blessings of Srila Prabhupada and his spiritual master that has helped him spread this divine message of Krishna consciousness within the dark barracks of the prisons. He sincerely prays to His Holiness Subhāg Swāmī Mahārāja, in whose personality he has found a loving spiritual father, to always keep guiding him in his spiritual life, to make him an instrument in the mission of Srila Prabhupada and to take him and his family to the highest platform of devotional life.

All glories to Śrīla Prabhupāda.