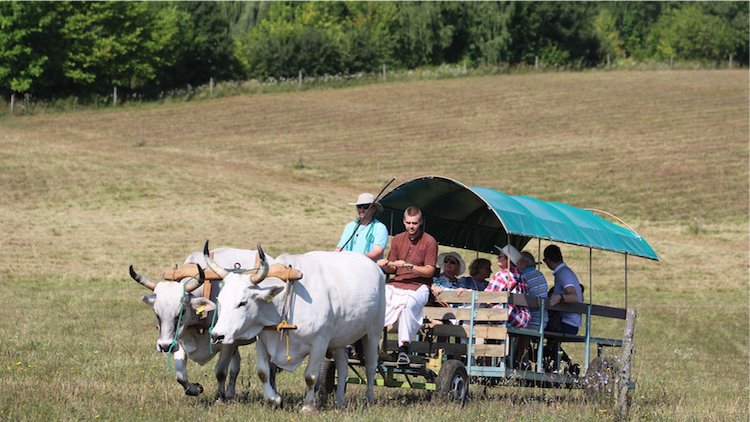 An incredible eight thousand people attended the Krishna Valley Fair in Hungary over the weekend of July 19th to 21st, many of them tourists vacationing at the nearby holiday hotspot of Lake Balaton.

These numbers have been consistent over the past few years for the Fair, which draws nearly a third of the 30,000 people that visit Krishna Valley throughout the whole year.

A big percentage of the Fair crowd are return visitors to Krishna Valley, one of the largest and oldest eco-villages in Europe. Established in 1993, the 700-acre sustainable farm is home to 150 devotees who care for sixty cows and oxen, and produce their own vegetables, fruits, grains and milk.

Communications director Gandharvika Prema Dasi explains why residents open up their normally quiet, peaceful community to so many people: “Krishna Valley is not just for us to realize Srila Prabhupada’s vision of simple living, high thinking, but to show others that it’s accessible, and teach them how they can also live naturally while keeping God in the center.”

Of course, devotees do this in a fun way. There were so many activities at this year’s Krishna Valley Fair, that visitors could participate in all three days without getting bored. Some families didn’t even go further than the schoolhouse, where children could learn how to make simple toys from materials around the house; do origami and other crafts; watch shows by a magician and a pantomime artist; and sample a variety of sandwiches and snacks.

Meanwhile at the vegetable garden, devotee tour guides showed people how to maintain a garden without chemicals, and shared different techniques and secrets. And at the cottage industry household, visitors learned how to weave using flax grass grown on the farm.

“We taught them how to card wool, how the flax stamps get broken and how the fibers are separated from the refuse, how to hackle the fibers, how to spin them into thread, and how to weave them,” says Gandharvika Prema. “We also demonstrated how to use vegetable derived colors to dye the thread, and make bracelets, bags, and rugs from them. These are all traditional Hungarian techniques of making clothes and materials, so people were amazed that we Krishna devotees were protecting such ancient local traditions.” 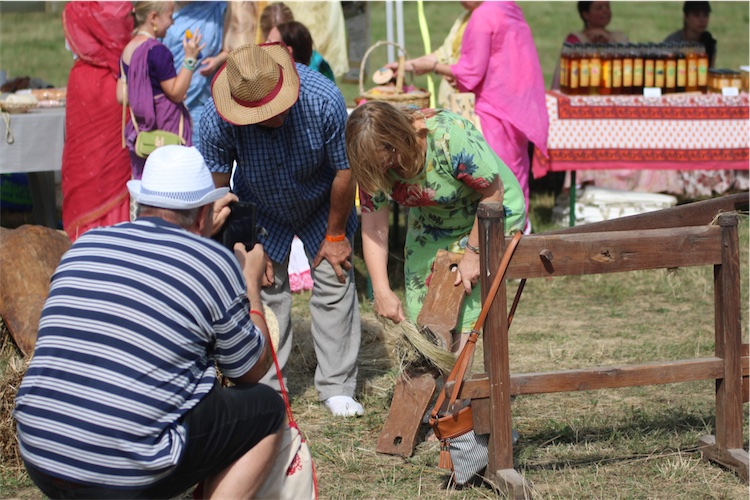 Nearby at the goshala or cow protection center, visitors could pet two young calves and take photos with them. They could also watch the cowherd men use flour produced on the farm to make chapatis and rotis, and yoghurt from the cows to make lassi. Then they got to sample these offerings, as well as sandwiches made with vegetables grown on the farm.

“While they were eating, they could chat to the cowherd men and ask for recipes,” says Gandharvika Prema. “It was very personal.”

Visitors could then follow “The Milky Way,” a long road from the goshala to the temple, lined with shops selling Indian jewelry and clothes. They could sample Indian fare like subji, pakoras and sweets at a huge 800 square meter Govinda’s restaurant. And at yet another dining option, the tandoori restaurant in front of the temple, they could have dishes cooked by pujaris (priests) using an outdoor mud oven.

Inside the temple itself, every fifteen minutes tour guides brought new groups of 30 to 40 people to visit Sri Sri Radha Shyamasundara, the presiding Deities and center of all the activities in Krishna Valley. There, guides introduced them to Srila Prabhupada, described how he established ISKCON and wrote his books, and explained the importance of Deity worship. At the end of the tour, many bought Prabhupada’s books.

Coming out of the temple, tourists could see a firsthand example of everyday Krishna conscious simple living, as husband and wife Lila Sukha Das and Brijabasi Dasi opened up their home.

“The couple stood in front of the house, inviting people in,” says Gandharvika Prema. “Everyone was amazed to see that it looked just like anyone else’s house – with nice furniture, a kitchen, bathroom, hall etc. But the electricity comes from solar panels; there’s a wood stove instead of a gas one; and they draw their water by hand from a well outside. The couple also lives a very simple life, with few posessions or technological toys, lots of books, an altar, and a small vegetable garden outside.” 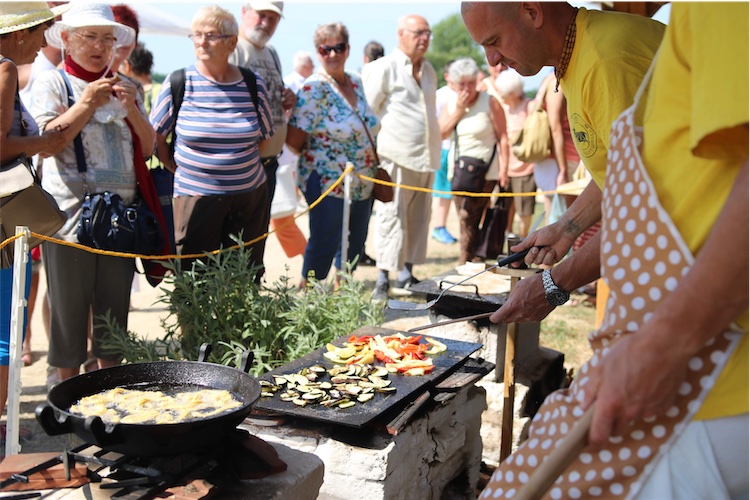 To go deeper into the philosophy that inspires this lifestyle, visitors could meet Sivarama Swami, Krishna Valley’s spiritual leader, who has become very popular all over Hungary through his Facebook videos on “Modern Morality from Ancient Wisdom.” Many came to the Fair just to listen to his teachings – he gave talks every two hours – as well as to shake hands with him and take selfies with him.

Other attractions at the Fair included trying on saris and gopi dots, ox cart rides, a Holi celebration, dramas, dances and musicals about Lord Krishna’s pastimes, and even live traditional Vedic weddings.

“People always think it’s some kind of artificial theater – but when they realize the weddings are real, they are amazed,” says Gandharvika Prema. “They feel like part of our family.” 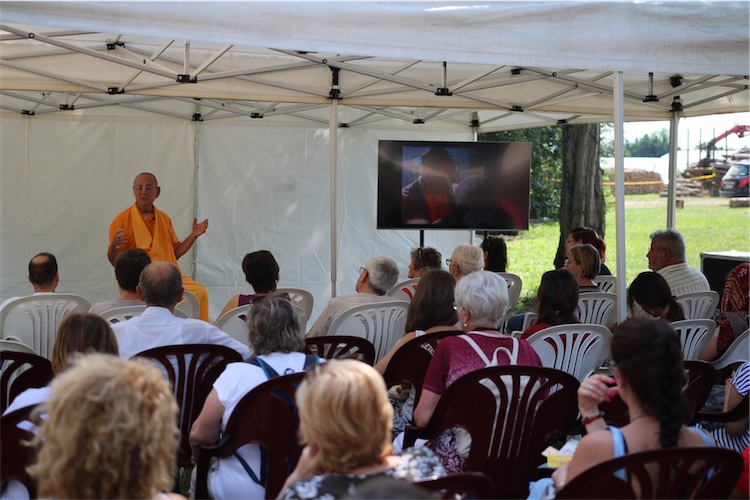 After the fair, visitors often comment that while in Krishna Valley, they feel like they are in a “wonderland.” Many come year after year to get an emotional and spiritual pick-me-up. They say that they love the devotees, especially how they are always kind and smiling.

“The long term purpose of the event is to give people an impression of Krishna and the Krishna conscious lifestyle that will last for their whole lives,” Gandharvika Prema says. “They let us look into our hearts during this event, and we hope that our guests feel part of Krishna’s huge family, and take small or big steps towards Him by starting to read about Him, follow His instructions, change their lifestyle, and take up some spiritual practices. Eventually, maybe they will feel ready to join our community and live with us a happy life.”