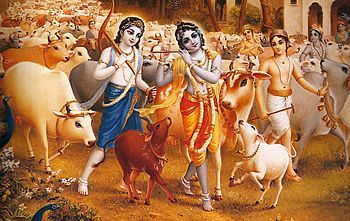 (1) The night has come to an end and the light of dawn is entering. O jiva soul, arise and give up your
sleep. Chant the holy names of Lord Hari, who is the giver of liberation; the enemy of the Mura demon;
the supreme enjoyer; the all-attractive one; and the horse-headed incarnation, Hayagriva.

(2) Lord Hari [Krishna] incarnated as the half-man, half-lion, Nrisimha. He appeared as a dwarf-brahmana
named Upendra and is the killer of the Madhu demon. He is the beloved son of the King of Vraja,
Nanda Maharaja, and is blackish in complexion. He is the slayer of the Putana witch and the destroyer of
the demon Kaitabha. All glories to Lord Hari, who appeared as Lord Rama, the son of King Dasaratha.

(3) He is the darling of mother Yasoda; the giver of pleasure to the cows, land, and spiritual senses; and
the protector of the cows. He is the Lord of the Vrindavana forest; the gopis’ beloved; the lover of Radhika; and
the most beautiful personality in all the worlds.

(4) As Ramacandra He brought about the end of the demoniac King Ravana; as Krishna He stole the older
gopis’ butter; He stole the younger gopis’ clothes while they were bathing in the Yamuna. He is a cowherd boy
of Vraja and the protector of the cowherd boys. He steals the hearts of all and always holds a flute.

(5) Lord Krishna is worshiped by the best of yogis and is the son of Nanda. He removes all the fears of
the inhabitants of Vraja. He is the color of a fresh rain cloud, and His form is enchanting. When He
wanders about, playing His flute, He looks very charming.

(6) He is the son of Yasoda and the killer of King Kamsa, and He sports in the rasa dance among the groves
of Vraja. Krishna engages in this rasa dance underneath the kadamba trees, and He resides in the forest of Vrindavana.

(7) He increases the ecstasy of His devotees. He is the reservoir of all love and is the transcendental Cupid
who uses His flowered arrows to increase the loving desires of the gopis. He is the pleasure of the gopis’ hearts
and the abode of all wonderful qualities.

(8) Lord Krishna is the life of the River Yamuna. He is always absorbed in amorous pastimes, and He is the moon
of the gopis’ minds, which are like the cakora birds that subsist only upon moonlight. O mind, obey these
words of mine and sing the glories of Sri Krishna in the form of these holy names, which are full of
nectarean mellows.