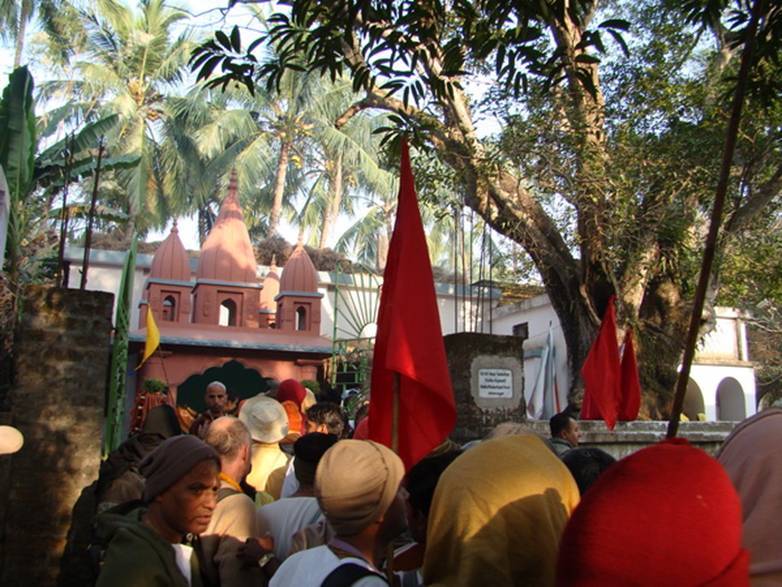 Sri Saranga Murari Thakura used to reside at Modadrumadwipa Mam-gachi, where his Deities of Sri Sri Radha-Gopinath are still present. There is also a Bakul tree there which is perhaps existing since the time of Saranga Thakura. There is a local legend concerning this tree. One day when Mahaprabhu came there, he noticed that the Bakul tree in the courtyard of Saranga's temple was dying. So he asked Saran-ga, "This Bakul tree is dying, so what are you going to do?" Saranga Thakura replied, "Besides Your mercy Prabhu, I don't see any hope for this tree." Then Mahaprabhu embraced that tree, which has remained healthy to this day and is now quite large. Saranga Thakura had resolved that he would not accept any disciples but Mahaprabhu nevertheless repeatedly requested him to do so. Finally he relented and agreed by saying, "Tomorrow morning the first person I see I will initiate with the divine mantra." The next day, in the early morning, he went to take his bath in the Ganges. By chance a dead body came and touched his feet as he entered the water. Picking up this body he said, "Who are you? Get up." From behind Mahaprabhu who was witnessing everything called out, "Saranga! Say the mantra in his ear!" Then when Saranga said the mantra into the ear of that dead child, the body became consious. He said, "My name is Murari. I am your servant. Please bestow your mercy upon me." On the day when this boy was to be invested with the sacred thread he was by chance bitten by a snake and died. As he was only a boy, the custom was not to burn the body but rather to place it on a raft of banana trees and float it down the Ganga. When his parents received the news that their child was alive, they came there to take him home. However Murari declined to accompany them to his former home. He told them, "I will remain in the service of he who has given me life again, for I am indebted to him." Vrindavana dasa Thakura has described this Sri Saranga Murari Thakura as follows: "There was an external consiousness present in Caitanya dasa's transcendental body. He would enter into the forest just to chase tigers. Sometimes he would jump on the back of a tiger, who by his influence remained inert. At other time he would put a phython on his lap and play with great delight. It was by the mercy of Avadhuta Mahasaya (Nityananda Prabhu) that he was able to play in this way with tigers and snakes. Sri Nityananda Raya is very affectionate to his servants, and thus by a simple wink of his eye they are able to enjoy mellows which are not even accessible to Lord Brahma. "Sri Saranga Murari Thakura was constantly in forgetfulness of himself, absorbed as he was in the bliss of speaking his inner thoughts. Sometimes he would remain in the within the water for 2 or 3 days without suffering any bodily inconveniences. He appeared to be almost insen-tient and therefore his activities were imperceivable. Such was the fierce intensity of his immeasurable prowess. How much can I describe of the interminable transformations of his devotional sentiments?" [Chaitanya Bhagavat Antya-lila. 5:426-434] The descendants of his family are still residing at Sargram in Barddhaman district. According to Gaur-Ganoddesa-Dipika (text 172.) Saranga Thakura was previously Nandi Mukhi, in Braja lila.
vraje nandimukhi yasit
sadya saranga-thakkurah
prahlado manyate kaishchin
mat-pitraa na sa manyate
"The Vraja-brahmani Nandimukhi-devi appeared as Saranga Takura. Some people think that Saranga Thakura was the incarnation of Prahlada Maharaj. My father (Shivananda Sena - the father of Kavi-karnapura) did not agree with them." His appearence is on the 14th day of the dark fortnight of the month of Asar. His disappearance is on the 13th day of dark fortnight af the month Agrahayon (Mrigarirsa - November-December). 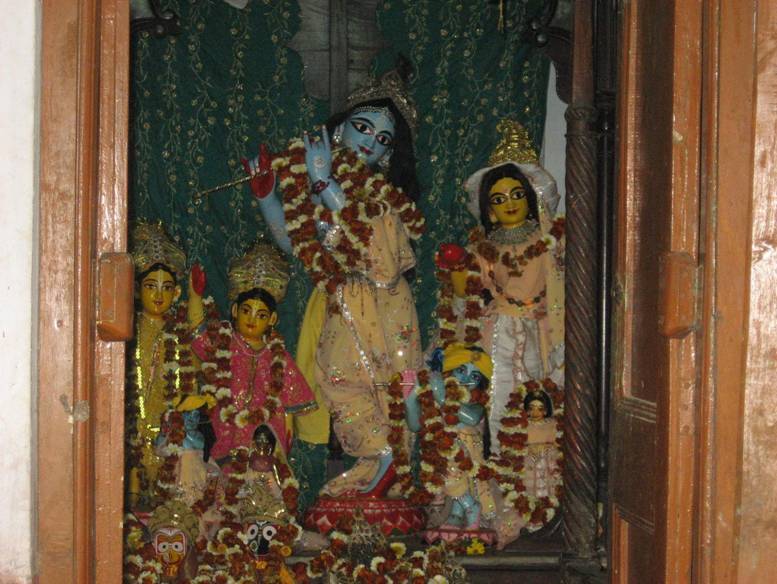 SRI SRI RADHA-GOPINATHA (small Deities on the right) were worshiped by Sri Saranga Thakura.
SRI SRI RADHA MADANA-GOPALA (large Deities in center) beloved Deities of Vasudeva Datta.
SRI SRI GAURA-GADADHARA (Deities on the left), these are the Deities of Puri Gosvami
The temple of Saranga Thakura and his worshipable Deities, Sri Sri Radha-Gopinath are still being worshipped at Mamgachi (Jaharnagar), just North of the present town of Navadwip. The worshipable Deities of Vasudeva Datta Thakur, Sri Sri Radha-Madan Gopal are also residing there. One can go there by rikshaw or tram from Navadwip town. By train one should go north towards Katwa and get down at the 2nd stop, Bhandar tikuri there one can easily ask and find the temple. 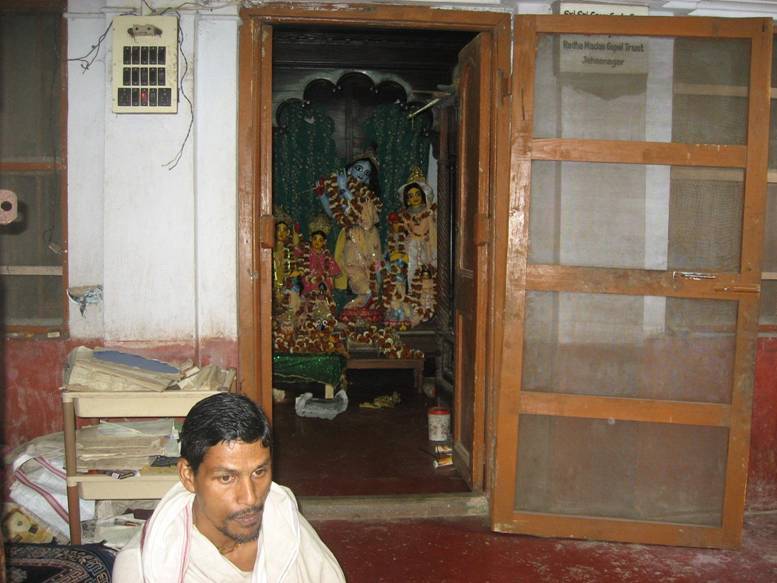 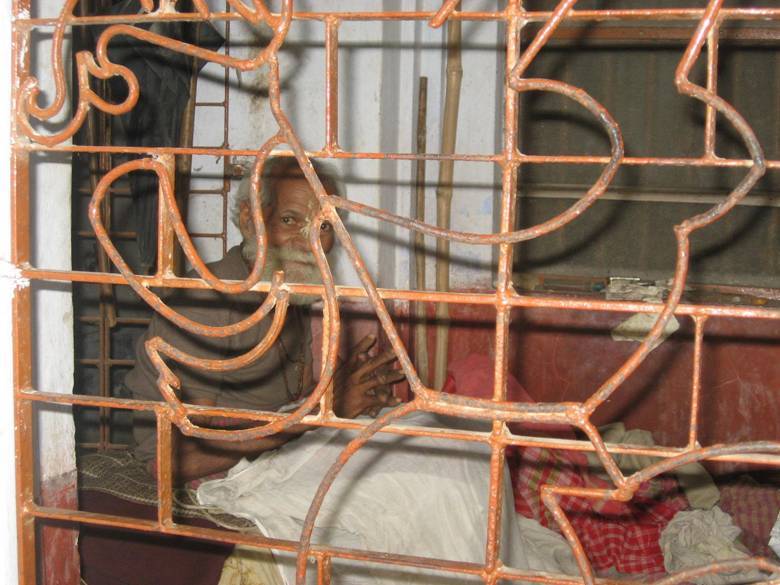 Maharaj who is worshipping and taking care of SRI SRI MADANA-GOPALA since more than 60 years. He is over 100 years old.
Gaudiya Vaishnava Viraha Bhajan (Song Sung in Separation Of Vaishnava)