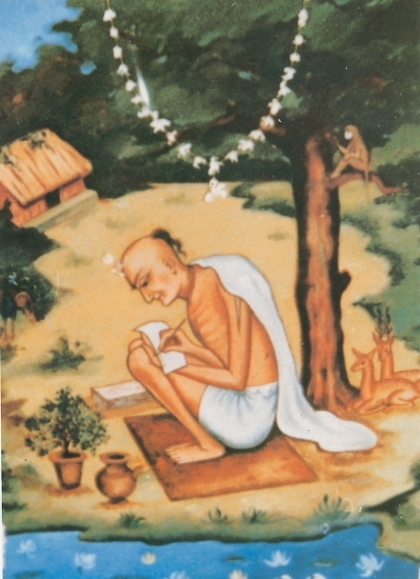 He was a famous Vaisnava poet, born in a vaidya caste in Saka 1482 (1560 AD) at Jhamatpur in the district of Burdwan. His parents were Bhagiratha and Sunanda. His brother, Syamadasa, was a physician.

Krsnadasa's father died when he was only six years of age. Thus Krsnadasa and his brother were brought up in the house of their paternal aunt. From early childhood Krsnadasa displayed a strong inclination towards renunciation. Upon reaching maturity he entrusted his brother with the responsibility of caring for the property and he dedicated himself completely to Harinama.

One night he received a command in a dream from Lord Nityananda to go to Vrndavana. Thus Krsnadasa went to Vrndavana, where he lived until the end of his life.

Premavilasa 18 states that Raghunatha dasa Gosvami was his guru. Krsnadasa's profound command over the Sanskrit sastras is apparent in his works CC, Govindalilamrta, and the 'Sarangarangada' tika of Krsnakarnamrta. His CC. is a treasure cherished by all Vaisnavas. His work called 'Svarupavarnava' was published in the Nityanandadayini Patrika. Another title of the same work is 'Svarupa Nirnaya' (Pathavadi ms. no. B 194).

Premavilasa 13.94 says that upon hearing the news of the theft of the manuscripts which were sent to Gauda, Krsnadasa plunged into the Radhakunda. Karnananda 7 also states that Kaviraja Gosvami jumped into Radhakunda but did not die, he lived for sometime anxiously awaiting the news that the books were recovered. He died after the disappearance of Dasa Gosvami, and his tomb stands near Radhakunda. He was Ratnarekha in his past incarnation, although some say that he was Kasturi manjari.