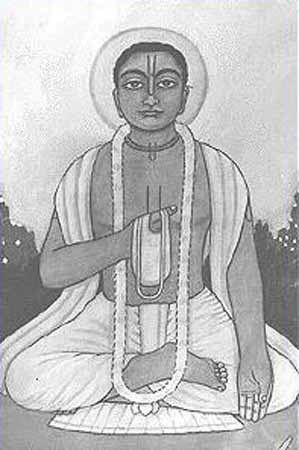 Accepting the order of his guru, Sri Syamananda, on his head, Rasikananda preached the message of Sri Gaursundar in the world for approximately 16 years. Thereafter he entered into his eternal pastimes through the lotus feet of Gopinatha at Remuna. On the first day of the bright fortnight in the month of Phalguna, Sakabda 1574 (1652AD), Rasikananda quietly slipped out of the village Santa without anyone's notice and walked to Remuna. Arriving there, he discussed Krsna-katha with the devotees there for a while and instructed everyone to serve Sri Krsna with devotion. Then, after requesting them to begin sankirtana, he entered the temple of Sri Gopinatha, and after touching Kshira-chora Gopinatha's lotus feet, which bestow complete fearlessness, he entered into their ultimate shelter.

Rasikananda prabhu’s samadhi is at the Temple of Kshira-chora Gopinath at Remuna just in front and to the right as you go in the main gate, with the temple to the left, and admin’ offices straight ahead

Around 1590 AD (Sakabda 1512), on the first day of the bright fortnight of the month of Kartik, during the night of the festival Dipamalika, when the houses are decorated with rows of lamps, Sri Rasikananda Deva made his appearance in this world. His father was Sri Acyuta Deva, the king of Rohini.

The village of Rohini or Royni was situated within the country known as Mallabhumi, encompassed on one side by the Suvarnarekha River (Suvarna meaning golden and rekha, a line). This Suvarnarekha River cleansed the sins of all the local people. Near Royni was another village of the name Barayita, by the side of which flowed the Dolanganadi River, whose banks were adorned with beautiful gardens. Raja Acyuta Deva very affectionately maintained his subjects and was famous for impeccably observing the rites attendant upon kings. In the village of Royni the son of King Acyuta appeared as the sun appears in the eastern sky and became dearly beloved by the people. He was known as Rasikananda and also Murari.

At a very young age he became quite proficient in all of the scriptures. He was very devoted to his parents, especially his mother, whose name was Bhavani. His father married him at very young age. Murari's wife Syamadasi was a treasure chest of good character who hailed from the village of Ghonta Sila, not far from Royni on the banks of the Suvarna Rekha, where in earlier ages the Pandavas had lived in exile.

Moment to moment his eagerness increased without diminition, as tears flowed from his eyes by his chanting of the name of Syamananda. He was in such a state that he spent most of the night sleeplessly, calling to his master Syamananda. Finally, towards the early morning, he drifted off to the land of dreams, where he saw his spiritual master, the very figure of charm and grace. Smilingly, Syamananda informed him, “When tomorrow the eastern sky becomes tinged with pink, you will obtain me.” Saying this, Syamananda disappeared. Rasikananda's heart began to swell in ecstatic bliss. Then, with the first rays of morning which dispel the dense darkness of the world, the wise Murari sat silently watching the path. After some time Syamananda approached from the distance, looking as effulgent as the sun and surrounded by his disciples like Sri Kishora dasa and others. His smiling face was like the lotus flower that opens to greet its friend- the sun, and his chest was as broad as a door. His captivating appearance was made all the more irresistable by the sweet sounds of 'Sri Krsna Caitanya-Nityananda' emanating from his lotus mouth. Absorbed in intense love he moved along the path like the clouds move in the sky. When Rasika caught sight of this divine form, he fell down in front of him to touch his lotus feet. In great ecstasy Shyamananda embraced him and began to bathe him with his tears of ecstatic love.

Sri Rasika Murari then felt himself to be one of the most fortunate living beings within this universe. On an auspicious day Syamananda initiated Rasika and his wife in Radha-Krsna mantra. After that, Rasikananda began to travel with his guru, during which time he became a very intimate disciple. Syamananda then bestowed upon him the service of Sri Radha- Govinda Deva at Sri Gopiballabhapur. Rasikananda became totally engaged in their Lordships service, and the devotees were charmed by his excellent services. At Gopiballabhpur and other places he began to seriously take up the preaching the message of Sri Gaura-Nityananda. By his influence many atheists and non-believers were transformed into devotees of Sri Gaura-Nityananda. "By the tremendous influence of Rasikananda's preaching, many rogues, robbers and atheists were delivered from their sinful activities and received his mercy. He distributed the jewel of devotion as he travelled from village to village, in the company of his disciples.

One day he even converted a wild elephant which was sent for his destruction into his disciple and engaged him in the service of Krsna and the Vaisnavas. That wicked miscreant who sent the elephant bowed at his feet when he realised his mistake. It is not possible to count the number of living entities that were extricated from the ocean of material existence by Rasikananda Deva's association. He was always intoxicated with the chanting of the Holy Name. Who cannot but be overwhelmed by hearing about his uncommon qualities?" [B.R. 15.86] Many virtuous kings and zamindars such as the king of Mayurbhanj named Vaidyanatha Bhanj, the king of Patashpur known as Gajapati and Candrabhanu, the king of Moyna, took shelter at his lotus feet. What to speak of those pious and noble gentlemen, even the sinful zamindar Bhima, Suba Ahmadbeg and the wicked atheist Srikar also surrendered themselves at his lotus feet. Another vicious, wild elephant was tamed by Rasikananda's transcendental influence and henceforward was known as Gopala das. Later, two jungle tigers likewise gave up their ferocious nature.

One year, during Lord Jagannatha's Ratha-yatra festival, Rasikananda Deva was preaching somewhere in the country, but when he realised that it was time for Ratha-yatra he dropped everything and rushed like the wind in order to come to Nilacala in time for the festival.

But in the meantime the festival had already begun. Lord Jagannath, Who felt reciprocal separation from His dear devotee Rasikananda, caused the Rath to stop. Though the king summoned his elephants to push the Ratha, under no circumstances could they budge it, not even an inch. Then Lord Jagannatha, seeing that the king was becoming frustrated, informed him that he was waiting for His devotee Rasika.

Finally Rasikananda Deva arrived, carrying with him many offerings of silk clothes and other presents. He fell down to offer his dandavats before Lord Jagannatha, and the king requested him to pull the rope at which the cart began to easily move along the road, just as the clouds move in the sky. Later the king requested Rasikananda to accept a gift of land so he might establish a temple there. Rasikananda requested the place known as Fultota Math, which is now known as Kunja Math. There he installed the Deity of Sri Bat Krsna. The Deity is now known as Sri Sri Radha-Rasika Raya.

Sri Rasikananda had three sons: Sri Radhananda, Sri Krsna-Govinda and Sri Radha-Krsna. The present servants of Sri Sri Radha-Govindadeva at Gopiballabhapur are their descendents. He composed Sri Shyamananda-sataka, Srimad Bhagavatastaka as well as other hymns and songs. His Sripat Gopiballabhpur can be reached from Calcutta by taking a train to Khavagpur, and a bus to Gopiballabhpur from there. There is also a temple of Rasikananda at Puri.

We observe the Disappearance of Vaisnava Acaryas by singing a bhajana in their honor. -