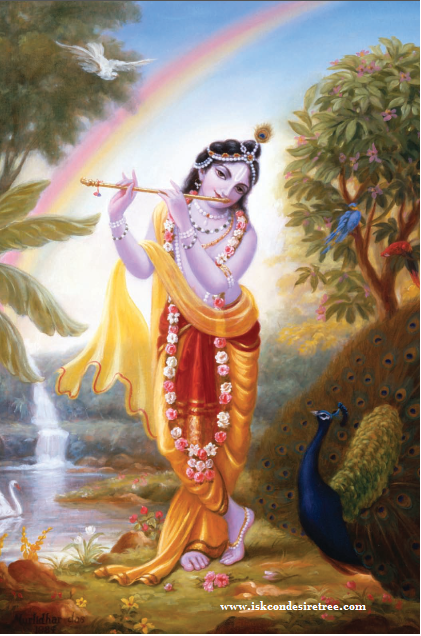 A list of lila avataras (pastime incarnations) mentioned in the Srimad Bhagavatam:

Brahma's day - 1,000 catur yugas - is divided into fourteen periods of the rule of Manus (fathers of mankind) known as manvantaras. The incarnations during these manvantaras are listed as follows:

In each of these yugas the Lord incarnates with a different body color according to the yuga.

“Krishna appears as an incarnation in every millennium. In the past, He assumed three different colors - white, red and yellow - and now he has appeared in a blackish color.”
- Srimad Bhagavatam 10.8.13

In the Satya yuga a white avatara appeared to Kardama muni to establish meditation as the process for self-realization.

In the Treta yuga a red avatara appeared to Brahma to establish fire sacrifice as the process for self-realization.

In the Dvapara yuga a dark avatara (Krishna) appeared as the son of Devaki to establish temple worship as the process for self-realization.

In the Kali yuga a Yellow avatara appeared (Chaitanya Mahaprabhu) as the  son of Sachi Mata to establish the chanting of the holy names (nama-sankirtana) as the process for self-realization.

There is no limit to the number of shaktyavesha incarnations. But some are mentioned in the vedic literatures as examples. They are of two kinds, direct and indirect.

When the Lord Himself expands displaying a particular power of His opulences He is known as Sakshat.

When He empowers a living entity with some particular sakti - power, for some specific activity, to represent Him , that living entity is called indirect or avesha incarnation.