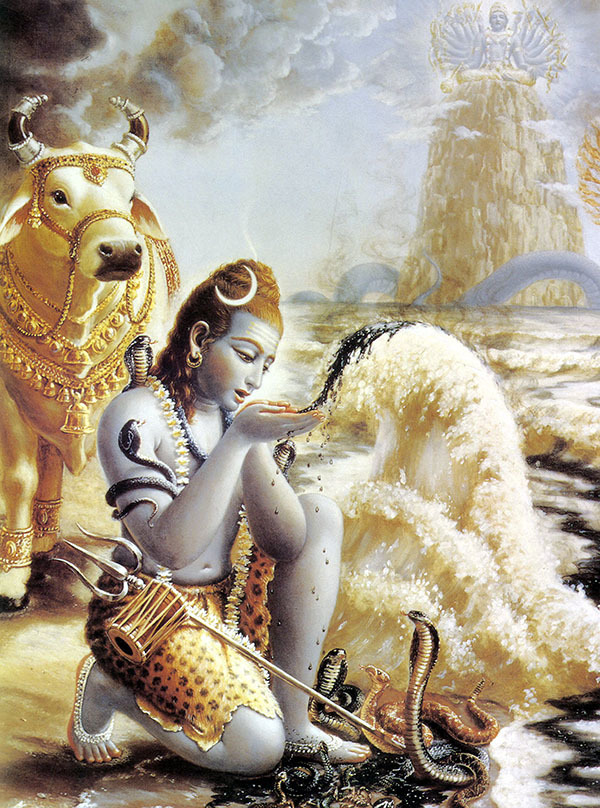 They stay awake the entire night. The Shiva lingam is worshipped throughout the night by washing it every three hours with milk, yogurt, ghee, honey and so forth, whilst chanting of the mantra “Om namah shivaya”, continues. Offering of bael leaves are made to the Lingam. Bael leaves are very sacred (as Tulsi to Lord Vishnu and dhar to Mother Durga are very pleasing to Them) and Lord Shiva becomes pleased with that offering. Many different hymns glorifying Lord Shiva are sung with intense fervour and devotion. Aspirants perform japa of the Panchakshara mantra “ Om namah Shivaya”

He who utters the names of Lord Shiva during Shivaratri with perfect devotion and concentration is freed from all sins that he/she have committed. He/she reaches the abode of Lord Shiva and resides very happily there.

NOTE: the Vaishnavas however worship Lord Shiva on this day in order to receive His blessings to become a better devotee of Lord Krishna (Vishnu) and not to attain residence in the abode of Shiva.

When creation was completed Lord Shiva and Parvati Mata went to live on the top of Mount Kailash.

Parvati asked, “O adorable lord, which of the many rituals observed in your honour pleases you the most.”

The Lord replied, “the fourteenth night of the new moon in the dark fortnight during the month of Phalgun, is my favorite day. It is called Maha Shivaratri. My devotees give me great joy and happiness bymere fasting than by ceremonial baths and offerings of flower, sweets and incense.”

Parvati was deeply impressed by the words of her husband. She repeated this to her friends, who in turnpassed it on to everyone else. Thus the sanctity of Maha Shivaratri was broadcast all over the world.

The Shivaratri fast is aimed at controlling a persons’ two biggest vices (rajas – the quality of passionate activity) and (tamas - that of inertia).

At many ashrams around the world Shivaratri is celebrated in the following manner.

Aspirants fast the whole day, many of them without taking a single drop of water. Some ashrams perform a grand havan (fire yajnas) to Lord Shiva for peace and welfare of all. The whole day is spent in chantinge of the mantra “Om namah Shivaya” and in meditation upon the Lord. At night all assemble in the temple and chant this mantra and during the four quarters of the night the Shiva lingam is worshipped with intense devotion.

“Once upon a time, the cowherd men of Vrindavana, headed by Nanda Maharaja, desired to go to Ambikavana to observe the Siva-ratri ceremony. The rasa-lila was performed during the autumn, and after that the next big ceremony is Holi, or the Dolayatra ceremony. Between the Dolayatra ceremony and the rasa-lila ceremony there is one important ceremony called Siva-ratri, which is especially observed by the Saivites, or devotees of Lord Siva. Sometimes the Vaishnavas also observe this ceremony because they accept Lord Siva as the foremost Vaishnava. But the function of Siva-ratri is not observed very regularly by the bhaktas, or devotees of Krishna.

Under the circumstances, it is stated in Srimad-Bhagavatam that Nanda Maharaja and the other cowherd men “once upon a time desired.” This means that they were not regularly observing the Siva-ratri function but that once upon a time they wanted to go to Ambikavana out of curiosity.”

“...observing Siva-ratri, Nanda Maharaja and all the cowherds men, they increased their attachment for Krishna. That is wanted.”

"In this verse Lord Siva is described as midhushtama, the best of the benedictors. He is also known as Asutosha, which indicates that he is very quickly satisfied and very quickly angered. It is said in Bhagavad-gita that less intelligent persons go to the demigods for material benedictions.

In this connection, people generally go to Lord Siva, and because he is always quickly satisfied and gives benedictions to his devotees without consideration, he is called midhushtama, or the best of the benedictors. Materialistic persons are always anxious to get material profit, but they are not serious about spiritual profit.

Sometimes, of course, it so happens that Lord Siva becomes the best benedictor in spiritual life. It is said that once a poor brahmana worshiped Lord Siva for a benediction, and Lord Siva advised the devotee to go to see Sanatana Gosvami.

In the Shanti Parva of the Mahabharata, Bhishma, whilst resting on a bed of arrows and discoursing on Dharma, refers to the observance of Maha Shivaratri by King Chitrabhanu. The story goes as follows.

Once, King Chitrabhanu was observing a fast with his wife, and it was the day of Maha Shivaratri. The sage Ashtavakra came on a visit to the king’s court.

The sage asked, “ O king why are you observing a fast today?” King Chitrabhanu explained the reason, as he had the gift of remembering the incidents of his previous birth.

The king said to the sage, “in my past birth I was a hunter in Varanasi (Kashi). My name was Suswara. My livelihood was to kill and sell birds and animals. One day, I was overtaken by the darkness of night. Unable to return home, I climbed a tree for shelter. It happened to be a bael tree. I had shot a deer that day, but I did not have time to take it home. I bundled it up and tied it to a branch on the tree. As I was tormented by hunger and thirst, I kept awake throughout the night. I shed profuse tears when I thought of my poor wife and children who were starving and anxiously awaiting my return. To pass away time that night I engaged myself in plucking bael leaves and dropping them down onto the ground. “The day dawned and I returned home and sold the deer. I bought some food for myself and for my family. I was about to break my fast when a stranger came to me, begging for food. I served him first and then took my food.”

“ At the time of death, I saw two messengers of Lord Shiva, they were sent down to take me to his abode. I then learnt for the first time of the great merit I had earned but the unconscious worship of Lord Shiva during the night of Shivaratri. They told me that there was a lingam under that tree and that I had dropped the leaves on that Lingam. My tears, which I had shed out of pure sorrow for my family, fell onto the Lingam and washed it. And I had fasted all day and all night. Thus, I unconsciously worshipped Lord Shiva on that most auspicious day.” “I lived in the abode of the Lord and enjoyed divine bliss for long ages. And now I am reborn as Chitrabhanu.”

Slokas and Quotes from the Scriptures

Just as milk is transformed into curd by the action of acids, but yet the effect curd is neither same as, nor different from, its cause, viz., milk, so I adore the primeval Lord Govinda of whom the state of Sambhu is a transformation for the performance of the work of destruction.

(The real nature of Sambhu, the presiding deity of Mahesa-dhama, is described.)

Sambhu is not a second Godhead other than Krsna. Those, who entertain such discriminating sentiment, commit a great offense against the Supreme Lord. The supremacy of Sambhu is subservient to that of Govinda; hence they are not really different from each other. The nondistinction is established by the fact that just as milk treated with acid turns into curd so Godhead becomes a subservient when He Himself attains a distinct personality by the addition of a particular element of adulteration. This personality has no independent initiative. The said adulterating principle is constituted of a combination of the stupefying quality of the deluding energy, the quality of nonplenitude of the marginal potency and a slight degree of the ecstatic-cognitive principle of the plenary spiritual potency.

This specifically adulterated reflection of the principle of the subjective portion of the Divinity is Sadasiva, in the form of the effulgent masculine-symbol-god Sambhu from whom Rudradeva is manifested. In the work of mundane creation as the material cause, in the work of preservation by the destruction of sundry asuras and in the work of destruction to conduct the whole operation, Govinda manifests Himself as guna-avatara in the form of Sambhu who is the separated portion of Govinda imbued with the principle of His subjective plenary portion.

The personality of the destructive principle in the form of time has been identified with that of Sambhu by scriptural evidences that have been adduced in the commentary. The purport of the Bhagavata slokas, viz., vaisnavanam yatha sambhuh, etc., is that Sambhu, in pursuance of the will of Govinda, works in union with his consort Durgadevi by his own time energy. He teaches pious duties (dharma) as stepping-stones to the attainment of spiritual service in the various tantra-sastras, etc., suitable for jivas in different grades of the conditional existence. In obedience to the will of Govinda, Sambhu maintains and fosters the religion of pure devotion by preaching the cult of illusionism (Mayavada) and the speculative agama-sastras.

The fifty attributes of individual souls are manifest in a far vaster measure in Sambhu and five additional attributes not attainable by jivas are also partly found in him. So Sambhu cannot be called a jiva. He is the lord of jiva but yet partakes of the nature of a separated portion of Govinda. (Sri Brahma Samhita, translation by Srila Bhaktisiddhanta Saraswati Thakur Prabhupad.)

Lord Krishna (Vishnu) is in this analogy considered to be likened to Milk. Milk is the origin of so many dairy products - Krishna tu bhagavan swayam, and so Krishna or Vishnu is the origin of everything. When Krishna wants activity overseen of the modes of Tamo guna He expands Himself transforming His supreme powers to act in that way, as no-one else could, and in that state He is Shambu - Shiva. So it may be seen that milk that is transformed becomes yogurt, but that yoghurt can never again become milk, this is presented in Brahma samhita 5:45.

"O gatekeeper of Vrndavana! O Soma, all glories to you! O you whose forehead is decorated with the moon, and who is worshipable by the sages headed by Sanaka, Sanandana, Sanatana and Narada! O Gopisvara (Shiva), desiring that you bestow upon me that prema for the lotus feet of Sri Sri Radha-Madhava who perform joyous pastimes in Vraja-dhama, I offer obeisances unto you time and again."

On the fourteenth day of the dark fortnight of the month of Phalguna (February-March), for the pleasure of Lord Sri Krsna, a Vaisnava should always take a vow to fast. (It is called Siva Ratri, or the night of Lord Siva.)

Being a Vaisnava, if somebody fasts on Lord Siva's night (Siva Ratri day), by the mercy of him (Lord Siva) who is diving in the ocean of the mellow of devotion to Krsna, one's devotion to Krsna increases rapidly. 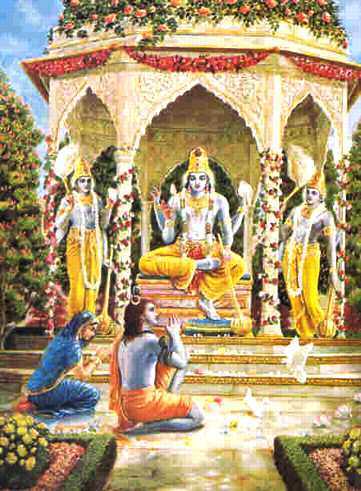