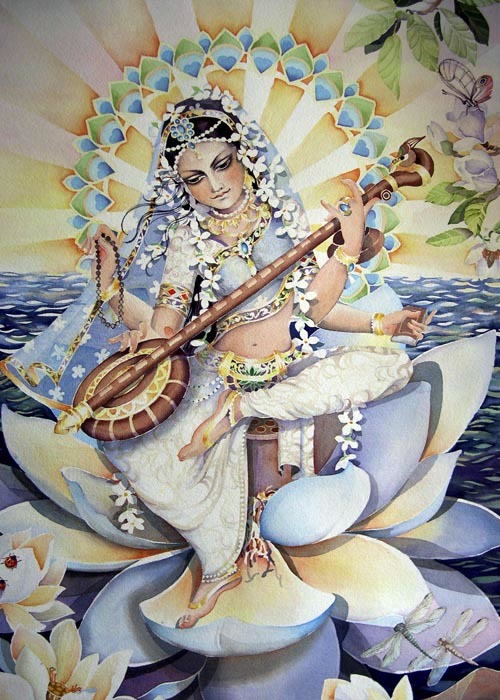 “Those whose minds are distorted by material desires surrender unto demigods and follow the particular rules and regulations of worship according to their own natures.” (Bg. 7.20)

om purnam adah purnam idam purnat purnam udacyate purnasya purnam adaya purnam evavasishyate
“The personality of Godhead is perfect and complete. Because He is completely perfect, all emanations from Him, such as this phenomenal world, are perfectly equipped as a complete whole. Whatever is produced of the complete whole is also complete in itself. Because He is the complete whole, even though so many complete units emanate from Him, He remains the complete balance.” (Sri Isopanishad, Invocation)
Due to the contamination of matter, the perfect living entity falls down, but this process of Krishna consciousness will again make him perfect. Through it, he can become truly happy, and after leaving the material body, enter into the kingdom where there is eternal life, bliss and full knowledge. (A.C. Bhaktivedanta Swami Prabhupada. Book - On the way to Krishna. Chapter 5.)
"Srila Bhaktisiddhanta Sarasvati Gosvami Maharaja has remarked that there is a class of common men who claim that anyone and everyone can worship the Supreme Lord according to his own invented mode of worship and still attain the Supreme Personality of Godhead. They claim that one can approach the Supreme Lord either through fruitive activities, speculative knowledge, meditation or austerity and that any one of the methods will succeed. They claim that one can accept many different paths and still reach the same place, and they maintain that the Supreme Absolute Truth may be worshiped either as the Goddess Kali, or Goddess Durga, or Lord Siva, Ganesa, Rama, Hari, or Brahma. In short, they maintain that it does not matter how the Absolute Truth is addressed, for ali names are one and the same. They give the example of a man with many names; if he is called by any of those names, he will answer.
Such views may be very pleasing to an ordinary person, but they are full of misconceptions. One who worships the demigods, motivated by material lust, cannot attain the Supreme Personality of Godhead. If one worships the demigods, the external energy of the Lord can award some results, but this is not to say that one can attain the Supreme Lord by such worship. Indeed, their worship is discouraged in Bhagavad-gita: 7:23." (A.C. Bhaktivedanta Swami Prabhupada. TLC. Chapter 29.)