Radha Kund and Shyama Kund, the two most spiritually surcharged Kunds (ponds), are located in a village called Arita about 3 miles north-east of Govardhan and fourteen miles from Mathura and Vrindavan.

Radha Kund is the holiest place in all of Brahma’s creation. Radha Kund and Shyama Kund represent the eyes of Govardhan, which is in the shape of a peacock. This is the place where Radha and Krishna performed their most intimate and most sweet pastimes.
One of the demons by the name Arishta, sent by the evil Kamsa to kill Krishna and Balarama, assumed the form of a bull and attacked Krishna. But he was easily overpowered and was instead killed by the Lord. This pastime took place in the afternoon when Krishna and His cowherd friends were herding the cattle.
That night when Krishna went to meet His beloved Srimati Radharani, She jokingly forbade Him to touch Her and said, “Today, You have killed a bull, which belongs to the cow family. You have therefore committed the sin of killing a cow. Please do not touch My pure body.”
Krishna smilingly replied that the bull was in fact a very dangerous demon and so by killing it He incurred no sin. But Radharani refused to accept this explanation and Her sakhis also supported Her.
Krishna then asked how He could atone for the sin. In reply, Radharani said that the only way to atone the sin is to take bath in every holy place in the world. To fulfill Her desire Krishna created a large kunda by striking the ground with His heel. He then summoned all the holy places from all over the planet. When they appeared Krishna asked their personified forms to enter in to the Kunda in the form of water, which they promptly did. Within moments the kunda was filled with the most pure and sacred water. Krishna then bathed in it and approached Radharani, having atoned for the sin of killing a bull. He bragged about how His kunda was the most beautiful and how great He was in creating such a kunda. Hearing Her beloved boast in such a manner, Radharani along with Her sakhis decided to create an even more exquisite kunda adjacent to the one created by Krishna, by digging the place with their bracelets. When not a drop of water manifested in the kunda, Krishna said that they could take water from His kunda. Radharani refused and She along with Her sakhis decided to fill Her kunda by carrying water from Manasi-ganga in clay water pots. Sri Krishna signalled to the holy places that they should insist that Radharani and Her sakhis fill up their kunda with water from His. The holy places personified prayed to Radharani and Her sakhis and pleased them by glorifying them in many ways. She then mercifully gave them the permission to enter Her kunda, and immediately a current of water flowed from Krishna-kunda to Radha-kunda.
After Radha-kunda was filled with holy waters of the entire planet, Lord Krishna told Srimati Radharani that Her kund would be the most famous place in the world and that He would daily bathe in Her kunda. Lord Krishna declared that Radha-kunda is as dear to Him as Srimati Radharani Herself and anyone who bathes in it will get Her love. Radha kunda is the personified love of Srimati Radharani.
These two kundas manifested at midnight on krishnashtami (the eighth day of the dark moon) in the month of Kartika; therefore, thousands of people bathe here at midnight on this day, which is known as Bahulashtami.
Since these are the places where Radha and Krishna performed their most intimate and sweet pastimes, Srila Prabhupada, told that we should not approach Radha Kund in a familiar or light manner. Otherwise it would not help us to advance in our spiritual life. We should approach these pastimes with great reverence and should not treat them as something ordinary or talk about it lightly. We should consider these pastimes to be way above our heads and should aspire to be the servants of the servants of those who have realized the glories of Sri Radha Kunda. 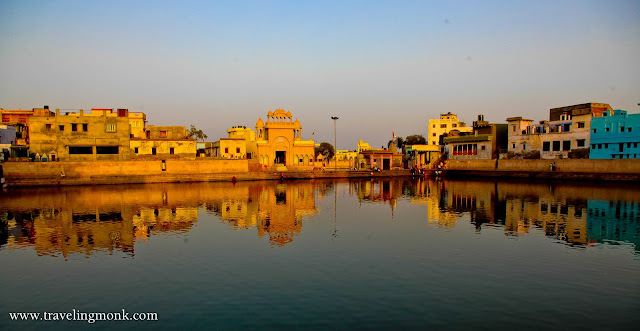 Arishtasura represents one of the very serious obstacles on the path of devotional service: the propensity to consider oneself very religious, and to follow the principles of religion invented by other conditioned souls—while criticizing the path of devotional service. This is a very serious obstacle, and it’s everywhere. In the name of religion, in this age of Kali, there is so much concoction: what is religion is taken to be irreligion and what is irreligion is taken to be religion. There are people presenting so many different ideas about God, about who is God and how to attain God.
Some people say that there is one path and it doesn’t matter what God you worship, it doesn’t matter what deity you worship, because ultimately, I am God, you are God, and everything is God; you just somehow purify yourself by concentrating yourself, your attention on some kind of divinity, and you will become Bhagavan. Hundreds and millions of people in this world believe in this. And then when we tell them Krishna is God, that Bhakti is the real process, they criticize—what is this sectarianism? What is this close mindedness? What is all this austerities and renunciation you are talking about? You just worship any God, any demigod, it doesn’t matter. Bhakti Siddhanta Saraswati Thakur declared war against these misconceptions.
But we sometimes tend to become affected by all this propaganda. Then it becomes very, very great obstacle in devotional service.
We should therefore understand what Krishna says in the Bhagavad Gita:
Men of small intelligence worship the demigods, and their fruits are limited and temporary. Those who worship the demigods go to the planets of the demigods, but My devotees ultimately reach My supreme planet. (BG 7.23)
So we should not be mislaid by false propaganda.
And even, often times, people who declare Krishna to be God, have so many different conceptions without knowing what actually the truth is.
Therefore Krishna says:
Evam parampara praptam imam rajarsayo viduh

If we take the truth from a proper disciplic succession of great acharyas, we then understand what is what.
So many people are dragged away from the process of devotional service, due to this type of association—represented by Arishtasura.
Kamsa worshipped Shiva, considered himself a very, very religious man, and he sent Arishtasura to promote hisreligiosity. What was the purpose? To kill Krishna. Similarly, all these Arishtasuras who are preaching principles that are contrary to pure devotional service, they are coming to attack Krishna in our hearts. Therefore, we must defend ourselves by maintaining proper association, by understanding philosophically what our siddhanta is, and ultimately by crying out to Krishna for help by chanting his holy names, “Hare Krishna Hare Krishna Krishna Krishna Hare Hare Hare Rama Hare Rama Rama Rama Hare Hare.

Raghunath Das Goswami wanted to dig a well so that the Vrajvasis would not wash their clothes in Radha-Kunda. While digging the well the workers hit upon a rock and blood began to come out of that rock. Raghunath Das Goswami immediately stopped the digging. Later on, Lord Krishna appeared in his dream and told him that He was non-different from Govardhan and the rock that was hit upon was the tongue of Giriraj. Krishna then asked Radhunath Das Goswami to take out that sila and worship it on the altar.

Even to this day the Govardhan sila representing the tongue of Giriraj is worshipped with Tulasi leaves and water from the Radha-kunda as instructed by Lord Krishna to Das Goswami. 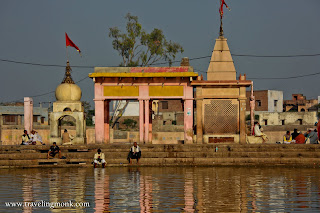 Lord Caitanya was searching for Aritagram, because according to the scriptures this is the place where the famous Radha-Kunda and Shyama Kund were present. So one day Lord Caitanya sat under a Tamala tree and while meditating upon Radha-Kunda and Shyama- Kunda, He saw two bodies of water in a nearby paddy field. Lord Caitanya who is none other then Radha and Krishna, could immediately identify them as Radha Kunda & Shyama Kunda. He very happily took the waters of the kundas and applied tilaka on His body using the clay from Radha-kunda.
Raghunath Das Goswami witnessed Lord Chaitanya’s pastimes at Puri, and after the departure of Lord Caitanya and His associates he came to Vrindavan. Sanatana Goswami instructed him to stay near Radha-Kunda where he daily spoke for 3 hours on Gaur Lila. He performed his bhajan at Radha-Kunda. One time Raghunath Das Goswami, understanding the mood of Lord Chaitanya, was thinking that Lord Caitanya wanted the holy places of Vrindavan to be excavated for the benefit of all people. But at that time Radha-Kunda & Shyama-Kunda were just two small ponds. Raghunath Das Goswami thought of excavating them but he didn’t want to entangle himself in money etc. Radha & Krishna understood his heart. At the same time a wealthy merchant was on his way to Badrikasrama with the intention of building a beautiful temple for Lord Badrinath. Badrinath appeared in the dream of that merchant and instructed him to excavate Radha-Kunda under the guidance of Raghunath Das Goswami instead. In this way Radha-Kunda & Shyama-Kunda were excavated.
While excavating Shyama-Kunda, Yudhisthira Maharaj appeared in a dream to Raghunath Das Goswami and told him that he, with his four brothers, were standing there in the form of trees and meditating on the pastimes of Radha & Krishna. So in order to show respect to the Pandavas the trees were left as it is and therefore Shyama-Kunda is not square shaped.

Shri Chaitanya Mahaprabhu, who is none other than the Supreme Lord Sri Krishna in the compassionate mood of Srimati Radharani, invested within the heart of Rupa Goswami his own divine love and commissioned him to come to Vrindavan and reveal Vrindavan to the world. In Shri Updeshamruta(text 9) Srila Rupa Goswami has written about all holy places in this creation. It is said that Mathura Puri is most sacred because here the Supreme Lord Krishna appeared. Of all the places in Mathura Puri Vrindavan is more sacred because here Krishna performs the Rasa Lila or dances of Vraja. Of all places in forests of Vrindavan, Govardhan is most sacred because such very, very confidential pleasing pastimes are eternally being enacted here. Of all places of Govardhan, the supreme-most of all places in all the spiritual and material worlds is Sri Radha kunda, because it is at Radha-kunda that the highest divine loving relations of Sri Radha and Sri Krishna are enacted. For devotees what is highest is whatever gives Radha and Krishna most pleasure. Because They enjoy each other’s company with highest degree of ecstatic love at Radha kunda, it is considered holiest of all holy places in all of creation. 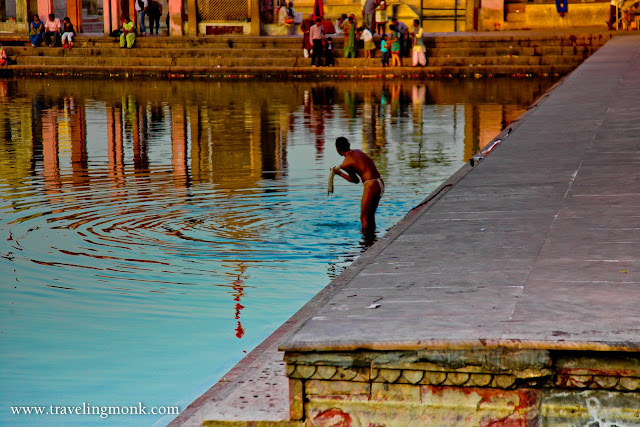