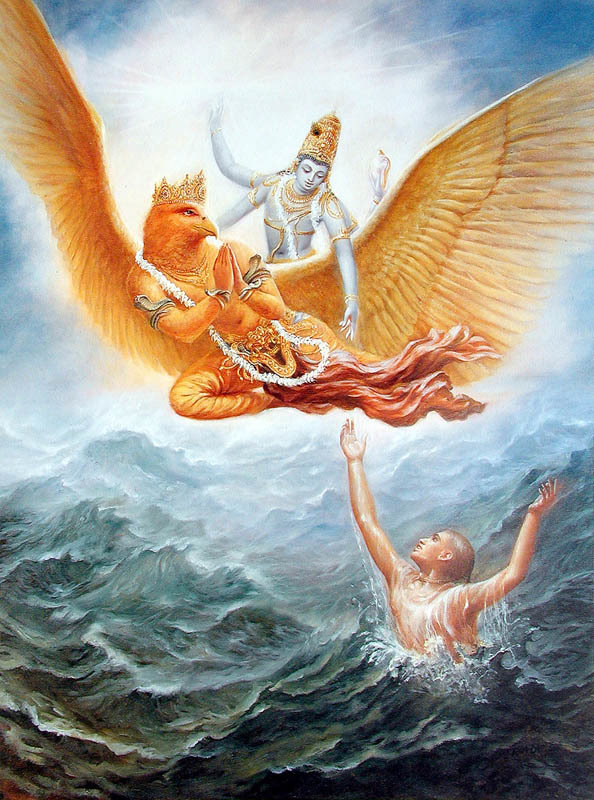 The glories of Pasankusa Ekadasi which occures during the waxing moon in the month of September/October is described in Brahmavaivartha Purana in the conversation between Lord Krishna and Maharaj Yudhisthira.

Maharaj Yudhisthira said O Madhusudan what is the name of the Ekadasi that occures during the waxing moon in the monthof September/October. Please be kind and explain this to me .

Lord Krishna replied, O best of the Kings! The name of this Ekadasi is Pasankusa Ekadasi. Now please hear from me the glories of this Ekadasi which distroyes all ones sins. Some people also callthis Ekadasi as Papankusa Ekadasi. One should specially worship lord Padmanabha onthe day of this Ekadasi. This Ekadasi awards a person the heavenly pleasures liberation and his desired results. Just by chanting the holy namesof Lord Vishnu one can attain all the peity of visiting all the holy places on the earth. If a conditioned soul inspite of indulging in varioussinful activities due to illusion takes shelter and offers obeisances at the lotus feet of Lord Hari who is expert in delivering the fallen souls thensuch a person does not have to go to hell.

Those Vaisnavas who criticise Lord Shiva and those Saivaites who criticise lord Vishnu are both undoubtedly go to hell. The resultone obtains by performing one thousand horse sacrifices or by performing one hundred Rajasuya sacrifices can not be equal to the one sixteenth portion of peity one obtains by following this Ekadasi. There is no peity in this world which is equal to the peity earned by observing the Ekadasi. Therefore there is no other day as santified as this day of Ekadasi which is very dear to Lord Padmanabha.

O King! As soon as a person fails to observe Ekadasis the sins begin to reside in his body. This Ekadasi awards its follower the heavenly pleasure ,liberation, freed from deceased condition, beautiful women, wealth and food grains. O maintainer of the earth! If one observesthis Ekadasi and remains awake on that night easily goes to theabode of Lord Vishnu.

Lord Krishna continued O best of the Kings! By observing the vow of this Ekadasi one can deliver ten generations from his mothers family , ten generations from his fathers family and ten generations fromhis wifes family. If a person observes this Ekadasi either in his chilhood or youthhood or in his oldage he does not suffer the miseries of thematerial existence. One who strictly observes this Pasankusa or Papankusa Ekadasi then all his sinful reactions are eradicated and at the end of hislife he reaturns to the abode of Lord Vishnu. If a person gives away gold,sesame seeds, land,cow, food grains,water, umbrella or shoes in charitythen such a person does not have to goo to the abode of Yamaraj. Any one whospents his day wiuthout engaging in pious activities he is like a dead manalthough he is breathing. His breathing is compared to the bellows of the blacksmith.

O best of the Kings! A person who digs well and lakes for the benefit of others, donates land and houses and perform other pious activities such as performing sacrifices is not subjected to the punishment of Yamaraja. As a result of peity only people live long lives, become rich, take birth in high class families and become deseaseless. The purport is that the direct result of observing Ekadasi is to attain devotional service to Krishna and the indirect result is to attain the temporary material benefits.