This beautiful place is located about one-and-a-half miles south-west of Sri Radha Kunda. It is also known as Sumana Sarovara due to the beautiful forest that surrounded the lake formerly. The trees there bore flowers like beli, cameli, juhi, yuthi, mallika and campaka.
Kusuma Sarovara is set against a backdrop of exotic palatial buildings in sand stone. These palatial buildings built in memory of one of the most powerful Jat kings contain a replica of Sri Krishna and Srimati Radharani’s Lotus feet. The ceilings depict beautiful pictures of Krishna’s pastimes. There is also a temple dedicated to Giriraj. 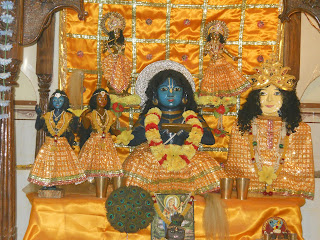 In terms of spiritual importance it is said that this Kunda is very dear to Srimati Radharani. Along with  Her girlfriends, She used to pick flowers from here. The Divine Couple Radha and Krishna performed many pastimes here.
Ashtavakra Muni performed great austerity at Kusum Sarovar while waiting for the appearance of the Divine couple Radha and Krishna.
Lord Chaitanya, who is none other than Sri Krishna Himself in the compassionate mood of Srimati Radharani, visited this Kunda and bathed in its cooling waters.
It is also said that anyone who bathes in the cooling and soothing waters of Kusuma Sarovara will achieve pure love of Godhead and gain entrance in to the pastimes of the Divine Couple Radha and Krishna.
“Once Narada approached Siva for an explanation of Rasalila. Lord Shiva gave Narada a mantra and asked him to go to Brahma Kund and worship Vrinda devi. When worshiped by Narada, Vrinda devi instructed him to meditate upon Krishna and Krishna’s Vrindavan pastimes. Narada went to Narada Kund and performed his tapasya by which Vrinda devi appeared and asked him to take bath in the north-west side of Kusum Sarovar. Upon doing so, Narada became Naradi Gopi. Later, when he again took bath, he became Narada muni. Narada then returned to Narada Kund to write Narada Bhakti Sutras.” 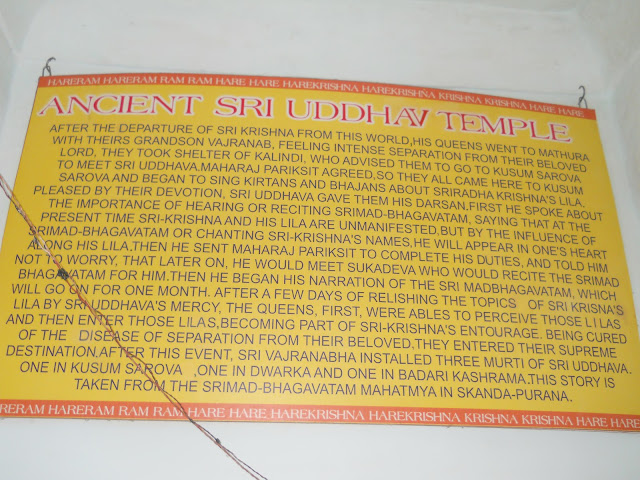